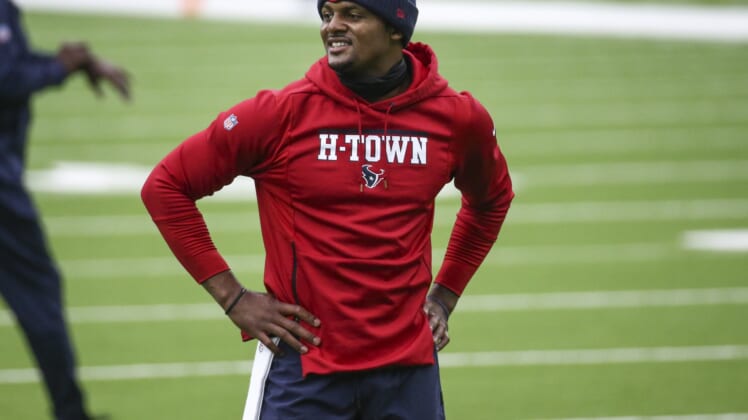 Houston Texans quarterback Deshaun Watson has made it clear he isn’t happy with the organization, leading to constant rumors about a blockbuster trade. It appears the team is starting to get the message and it could have huge implications on the 2021 NFL offseason.

As the Texans conduct their search for a head coach, the job’s desirability to potential candidates continues to take a hit. More people around the NFL are becoming alarmed by the reported organizational issues in Houston, leading to Houston’s opening becomes the most undesired head-coaching job in the NFL.

With the team’s reputation taking a massive hit and a franchise already facing multiple long-term questions, the Texans are reportedly starting to consider what they previously refused.

Deshaun Watson’s issues with the Houston Texans became public on Jan. 7, when we learned about his anger with the organization’s hiring process and promises that were not met by owner Cal McNair. While the team attempted to downplay any tension, the NFL world started buzzing about potential trades involving the superstar quarterback.

Watson certainly took issue with the horrendous offseason trade that sent away close friend and All-Pro receiver DeAndre Hopkins. But he managed to go over that and delivered a career-best season in 2020, leading the NFL in passing yards (4,823) and finishing with the second-highest quarterback rating (112.4).

The 25-year-old quarterback wants out because of the organization’s dysfunction. Not only executive Jack Easterby, who has obtained an alarming amount of power in a short time, but also Cal McNair. Houston’s owner promised to make Watson involved in the hiring process, representing his teammates in the locker room, that never happened.

McNair and Easterby hired Nick Caserio as general manager, with the team’s leader and franchise star finding out on social media. While both McNair and Caserio are trying to mend the decimated relationship, the damage may already be done.

Now, the Texans might finally be realizing the magnitude of this situation. A team without a first- or second-round pick in the 2021 NFL Draft and no cap space, faces a quarterback potentially willing to sit out games. As a result, the organization seems to be changing its mind regarding his future.

One source told ESPN’s Sarah Barshop that the Texans have begun internal conversations about potential trade partners for Watson. They’ve also started to think about possible long-term replacements to take over for Watson at quarterback, in the event of a trade.

While Watson hasn’t specifically asked the team for a trade, things seem headed in that direction. After playing at an MVP-caliber level this season, only for this team to finish 4-12 and be pulled down by ownership, he seems done with this partnership.

Even if a trade demand is made, with Watson willing to waive his no-trade clause, the asking price will be unprecedented. Frankly, it needs to be for the Houston Texans. This team needs a multi-year rebuild and that means tearing everything down and building around draft picks for years to come.

With the New York Jets and Miami Dolphins each owning top-five picks and two 2021 first-round selections, those are assets that will interest Houston. Plus, putting Sam Darnold or Tua Tagovailoa in a package would give the Texans a potential franchise quarterback to develop. If Watson really becomes available, though, a majority of the NFL will be interested in acquiring him this offseason.