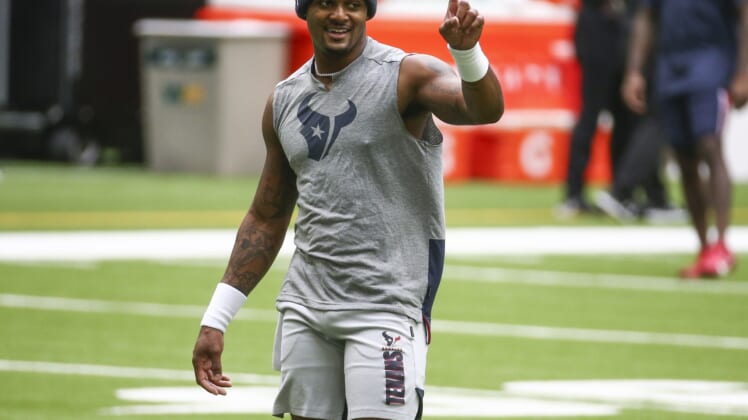 If a Deshaun Watson trade does in fact occur over the next several weeks, it will shake up the foundation of the NFL as we know it. Said blockbuster would also create a new beginning for the Houston Texans.

By now, it’s already known that Watson wants out of dodge. He’s made this clear behind the scenes and his ramped up his activity on social media. There’s numerous reasons for Watson’s unhappiness, including the Texans’ search for a head coach and general manager.

Coming off a 2020 season in which the former first-round pick led the NFL with 4,823 passing yards to go with 36 total touchdowns, Watson has been the talk of the NFL watercooler. We now have more information on a potential haul Houston might receive in a Deshaun Watson trade, and it’s more than eye-opening.

If those around the NFL believe that history has a way of repeating itself, there’s some who might look at this report and walk away from trade talks with Houston for Watson.

Back in October of 1989, the Dallas Cowboys sent Walker and a couple draft picks to the Minnesota Vikings for a bounty that would ultimately turn out to create the Cowboys’ dynasty of the 1990s. The return ultimately included these following players as headliners:

Herschel Walker ended up playing a total of 40 games with the Vikings, recording a mere 2,264 yards in the process. Within the next half decade, Dallas had won three Super Bowls while Minnesota earned zero playoff victories.

Obviously, this can’t be compared to a potential Deshaun Watson trade. In today’s NFL, quarterbacks take precedence over running back. It just shows us what type of a haul the Texans could be looking for in a potential blockbuster.

“The haul would be pretty insane,” one NFC executive said.

The starting-off point here would likely be three first-round picks, as was the case in the Walker trade. While no other team is going to yield multiple veteran players for Watson, Houston is said to be demanding a Pro Bowl-caliber player as part of the package. From there, multiple second-round picks and other draft compensation would have to head to the Texans.

Notice how a Pro Bowl player is included in each of these two hypothetical trades? That’s likely what it would get to net Watson. Whether any team is willing to pay that price remains to be seen.

What we do know is that NFL rumors will focus on Deshaun Watson on a near never-ending loop until he’s either traded or the drama with the Houston Texans subsides a bit.