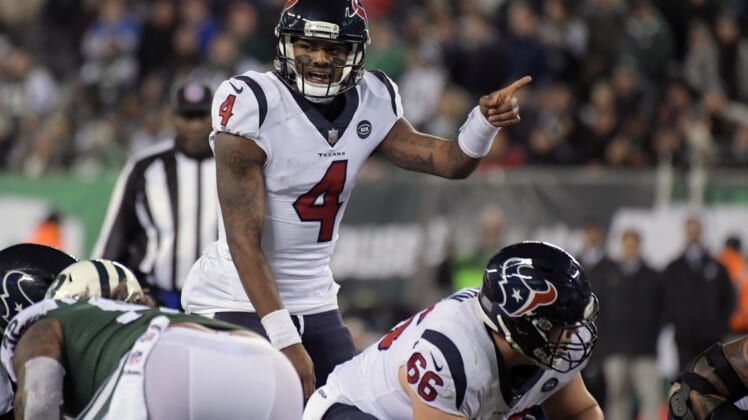 Deshaun Watson is seemingly ready to move on from the Houston Texans, following years of organizational dysfunction. With trade rumors swirling around the superstar quarterback, he reportedly might have an eye on where he wants to play.

For their part, the Texans want to keep Watson. Despite tremendous distrust from the 25-year-old in the team’s ownership and front office, Houston is currently focused on salvaging the relationship. If that doesn’t happen and a trade demand is made, Watson could use his no-trade clause to orchestrate a move to his dream landing spot.

Thanks to his new contract extension, signed before the 2020 NFL season, Deshaun Watson holds some control over his fate. While the Texans may initially refuse to trade him, other teams are already making calls to new general manager Nick Caserio. With Watson willing to sit out games, he could force Houston’s hand. If that happens, the NTC could then help the Pro Bowl quarterback pick which team he lands with in 2021.

According to The Miami Herald‘s Armando Salguero, Watson wants to join the AFC East and he has two specific spots in mind. His first preference, a trade to the New York Jets. If he can’t play for them, his second choice would be the Miami Dolphins.

Conveniently, the Dolphins and Jets have been the two most discussed teams for blockbuster trades. Miami owns the No. 3 overall pick, No. 18 overall pick and two second-round selections in the 2021 NFL Draft. Meanwhile, the Jets have the No. 2 and No. 23 selections, along with a pair of 2022 first-round picks. Both teams also have young quarterbacks who could be flipped to Houston.

Related: Why a Deshaun Watson trade is perfect for the Miami Dolphins

While it might seem surprising that the Jets would be Watson’s first choice, the preference is tied into a recent move by the team. When the Texans first vowed to their quarterback that he could have input on who becomes the next head coach, he recommended Kansas City Chiefs offensive coordinator Eric Bieniemy and San Francisco 49ers defensive coordinator Robert Saleh.

Houston ignored their star’s suggestions, sparking the anger that only seems to worsen with each passing day. Meanwhile, the Jets scooped up Saleh and it is being recognized as one of the best coaching hires in 2021. According to Salguero, Watson told those close to him that the Jets are his top preference because they hired the coach he is highest on.

It’s worth noting, Miami is second on his list of desired landing spots. So, if the Dolphins make a superior offer to the Jets, it seems clear Watson would be willing to approve of that move.

There are a few other reasons for him to like the Jets. First, Saleh’s hiring of Mike LaFleur. The brother of Green Bay Packers head coach Matt LaFleur, Mike has spent most of his coaching career around Kyle Shanahan. Given the success quarterbacks have had in these offensive schemes, Watson could thrive in his new surroundings.

The Jets will also have a ton of cap space this offseason. Not only could they afford Watson, but New York would still have the financial flexibility to sign a wide receiver like Allen Robinson, Kenny Golladay or Chris Godwin. Pair one of those Pro Bowl weapons with Denzel Mims and you’ve got an explosive, young duo on the outside.

This is going to be the biggest story of the NFL offseason. If Deshaun Watson ultimately asks for a trade and takes the measures to force his way out, we could see one of the biggest trades in NFL history.