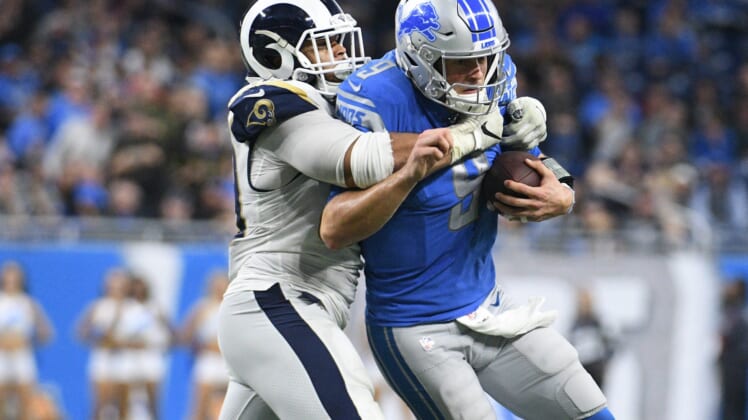 Matthew Stafford is headed to the Los Angeles Rams, a trade that shocked the NFL world and dramatically impacts the 2021 NFL season and far beyond. Just days after the Detroit Lions mutually agreed to part ways with their franchise quarterback, they found a home for him in a win-win trade for everyone.

The deal, first reported by ESPN’s Adam Schefter, is a monumental moment in the NFL offseason. For the first time in NFL history, two quarterbacks taken with the No. 1 overall pick were traded for one another. Of course, the ramifications of this move go far beyond the historical nature of the deal.

This trade sends both teams in very different directions and will influence the entire NFL offseason. Teams like the San Francisco 49ers, Indianapolis Colts and Chicago Bears all just missed out on an opportunity to land a quarterback who would instantly make them contenders. With one marquee passer off the market, teams willing to move their franchise signal-caller will have even more leverage during negotiations.

Let’s dive into the winners and losers from this blockbuster trade.

While Stafford has only made one Pro Bowl during his NFL career and doesn’t have a playoff victory on his resume, don’t let that diminish his accomplishments. Playing for one of the worst franchises in NFL history, he did what so few other quarterbacks could for this organization. Playing through injuries, seeing the team push his Hall of Fame receiver into retirement, a bad coaching staff. Through it all, Stafford finished his 12-year stint in Detroit with 45,109 passing yards, a 282/144 TD/INT ratio and some stellar play late in his career.

He now lands in a dream scenario. Sean McVay is one of the NFL’s smartest coaches, with an offensive mind capable of attacking any defense. Unfortunately, Jared Goff’s limitations as a quarterback prevented fans from seeing this offense’s true ceiling. Not only is Stafford more physically talented than Goff, but he has vastly superior intellect and poise at the position.

After dealing with mediocrity in Detroit, in the best of times, Stafford joins a Super Bowl contender. Los Angeles already boasts one of the NFL’s best defenses and that won’t change with All-Pro talent Aaron Donald and Jalen Ramsey on the field. The Rams also have two excellent receivers in Cooper Kupp and Robert Woods, along with a strong offensive line and a fantastic rushing attack. It’s the perfect environment for Stafford, one that will finally allow him to compete for a Super Bowl.

The Texans have made it clear they don’t want to trade Deshaun Watson. The organization is adamant that a few meetings with the star quarterback can resolve any issues. Given the cause of Watson’s issues with the organization and his willingness to never play for the franchise again, a trade feels inevitable.

Quite frankly, Houston should be more receptive to offers after Saturday night. Seeing Stafford, a much older quarterback at the end of his prime, net two first-round picks and a top-100 selection should make Nick Caserio excited. Watson is an elite player, one of the best in the NFL, and coming off a dominant season. Under contract through 2025, he checks all the boxes.

Related: Why the Miami Dolphins should trade for Deshaun Watson

Even with Watson making a public trade demand and having a no-trade clause, the Texans can set the price here. While the 25-year-old might have preferred destinations, he simply wants to play anywhere else. Houston can set its asking price at four first-round picks or three future firsts and a young player. Given what the Rams just paid, at least one team will be willing to give Houston whatever it wants.

The Lions were hopeful of getting a first-round pick for Stafford. Thanks to a crowded market of quarterback-needy teams and a Rams’ front office desperate for a quarterback change, Detroit got more than it ever imagined. This is going to be a multi-year rebuild, that was understood when Dan Campbell took over. With the right head coach and general manager in place, now the Lions can build a real foundation for the future.

Consider Jared Goff nothing more than a fill-in starter. Detroit will need to keep him on the roster this season ($27.8 million cap hit) and for 2022 ($25.5 million), but he can be cut after that. While he is only 26, his time in the NFL has proven he won’t be this team’s long-term QB1. Detroit can spend the No. 7 overall pick on a quarterback and use all of its remaining draft capital in 2021 and beyond to build around that player.

Some will argue that a change of scenery and a new coaching staff will do good things for Goff. Maybe that happens and he returns to that player we saw from 2017-’18, who had a 60/19 TD/INT ratio, 100.8 quarterback rating and completed 63.6% of his passes. But the reports out of Los Angeles before this trade, when you’d think the Rams would want to inflate Goff’s value, are alarming.

Sean McVay became frustrated by Goff making the same mental mistakes that we see from rookie quarterbacks. Even with years of starting experience in the NFL< playing in a quarterback-friendly system, Goff couldn’t get it done the past two years. He still crumbles when pressured, makes terrible decisions with the football, and limits an offense’s big-play ability.

Now, after 26 years in California, Goff is headed to Detroit. It’s an organization that is rebuilding, clearly focused on building a team that can win in 2023 rather than putting impact talent on the field this season. The Lions’ receiver room is empty and offensive coordinator Anthony Lynn isn’t on McVay’s level as a play-caller. Next season could be the year where Goff really gets exposed.

This was the worst-case scenario for San Francisco. Kyle Shanahan wanted Matthew Stafford, the ideal fit to plug into this scheme and the perfect talent to make this team a Super Bowl contender in 2021. At one point, San Francisco even emerged as the favorite to pull off this move.

Then, it was all gone in an instant. Los Angeles put all of its chips on the table, taking the win-now approach once again, beating their division rival for a top quarterback. The Rams are now the best team in the NFC West, with a quarterback who can finally attack San Francisco’s secondary.

Read More: 5 reasons why a Deshaun Watson trade to the 49ers makes sense

The 49ers are in a tough spot. Stafford was the best option available in terms of talent and acquisition cost. Now, Shanahan and general John Lynch will either need to stick with Jimmy Garoppolo, roll the dice on a rookie, or sacrifice years of draft picks and add a young defender to land Deshaun Watson.

Speaking of Watson, NFL teams probably aren’t happy with the Rams. Everyone knew Houston’s asking price for a top-five quarterback in the NFL would be through the roof, especially since the organization is still playing coy. Now, after seeing what the Lions just acquired, the Texans can push the bar even further.

What other options do teams like the 49ers, Indianapolis Colts, New England Patriots and Chicago Bears have? Sam Darnold is an unknown, a rookie won’t immediately make any of these teams a Super Bowl contender and Dak Prescott isn’t leaving Dallas. So, Watson is the one option.

A trade is going to happen. Whether it comes in a month or the fall, Watson won’t be playing for the Texans ever again. When the deal goes down, the team acquiring him will instantly become a Super Bowl contender. With that said, they’ll be living with the unprecedented price paid for years to come.