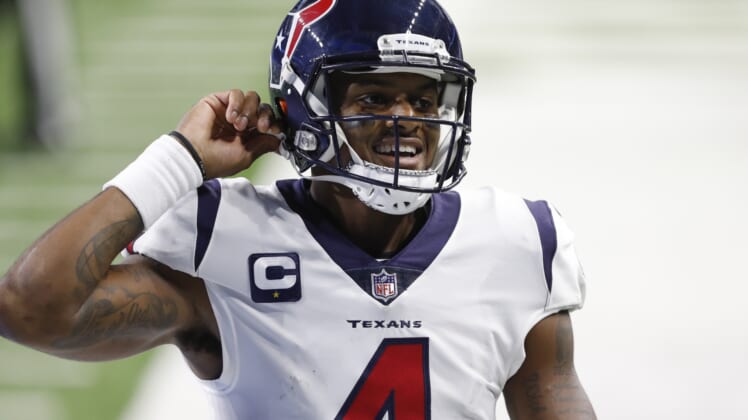 Deshaun Watson trade rumors have reached a fever pitch since his discontent with the Houston Texans became public record. Among the issues, Watson is not happy that the team didn’t consult with him prior to hiring Nick Caserio as its news general manager. Watson is also unhappy about the search for a new head coach to replace Bill O’Brien.

The backdrop here is about 30 NFL teams who would be interested in making a move for Watson. He’s among the best young quarterbacks in the NFL. He’s under team control for the next five seasons. He’s a generational quarterback.

Among those bandied about as a potential suitor, the San Francisco 49ers just might have a good chance of acquiring Watson. They could very well move on from Jimmy Garoppolo this offseason. Despite the injury issues we saw during a down 2020 season, San Francisco is still seen as a Super Bowl contender when healthy. Below, we look at five reasons why a Deshaun Watson deal to the 49ers makes sense.

The idea of Shanahan being given a mobile quarterback to run his complex offense has to be seen as appealing to 49ers general manager John Lynch. A move for Watson would certainly do this. Here’s a quarterback that has run for 1,677 yards over the course of four seasons. During that very same span under Shanahan, 49ers quarterbacks have run for all of 360 yards — most of that coming due to pressure.

A run-pass option in Shanahan’s offense with the 49ers would change the dynamics in a big way. He has not had this type of quarterback during a career that has seen the head coach ascend the ranks of the greatest offensive minds of his generation. With limited quarterback play, Shanahan’s offenses have still ranked in the top half of the league in each of his first four seasons with the 49ers.

Nick Caserio and the Texans could have interest in Jimmy Garoppolo

Let’s preface this by indicating that Garoppolo would not in any way be the centerpiece heading back to Houston in a hypothetical Watson blockbuster to the 49ers (more on that at the end). Rather, he could act as a stopgap quarterback for an organization that lacks draft capital. Each of the Texans’ first two picks, including the No. 3 overall selection in the 2021 NFL Draft, are currently held by the Dolphins.

There’s an obvious connection here between new Texans general manager Nick Caserio. He was part of the Patriots’ front office that selected Garoppolo in the second round of the 2014 NFL Draft to eventually become Tom Brady’s heir-apparent. Said front office pushed back against trading Garoppolo during the midway point of the 2017 season, too. It’s a match that could work over the short term as the Texans find their quarterback of the future.

One of the major backstories for the 49ers this offseason will be their lack of cap room due to the revenue downtick created by COVID-19. They currently have less than $15 million to spend under the cap with the likes of Trent Williams, Jason Verrett and Richard Sherman slated to become free agents. Sherman himself has already admitted that he’s likely gone due to said cap situation.

Shockingly enough, Watson has a $15.4 million cap hit for the 2021 season compared to Garoppolo’s $26.21 million cap hit. A move of this ilk would actually save the 49ers in cap room. Sure Watson has a combined cap hit of $152-plus million over the final four years of his new contract. However, the ideal scenarios is that NFL revenue increases in 2021 and beyond. That would help San Francisco take on said deal.

The Texans need to rebuild, starting with moving Deshaun Watson

As noted above, Houston doesn’t have either its first or second-round pick in the 2021 NFL Draft due to separate deals with the Miami Dolphins. That’s certainly not the way you want to build a team in the modern NFL. It’s also one of the reasons Bill O’Brien was fired as head coach and general manager after an 0-5 start to the season.

Even with Watson aboard, these Texans are in no position to succeed. They need help on both sides of the ball. Caserio agreed to a six-year deal with the Texans, meaning that he’s in position to build this team from the ground up. It’s similar to when Shanahan and Lynch took over pretty much an expansion roster following the 2016 season in San Francisco. Their philosophies helped build a Super Bowl from the ashes a season ago. Perhaps, Houston follows this same model. Moving Watson for an historical package would help get that started.

The 49ers have pieces that have been missing in Houston

Assuming left tackle Trent Williams returns in free agency (a good bet), these 49ers already have that future Hall of Fame blindside protector for Deshaun Watson. They also have one of the game’s top-two tight ends in George Kittle as well as two talented young receivers in that of Deebo Samuel and Brandon Aiyuk.

These are four major components Watson did not have with the Texans. They set him back big time. Also important to note here is the presence of a game-breaking running back in that of Raheem Mostert in San Francisco. He’d work wonders with a mobile Watson under center.

How a Deshaun Watson trade to the 49ers might look