The San Francisco 49ers probably can't afford to keep cornerback Richard Sherman. What are the All-Pro's best free-agent destinations in 2021? 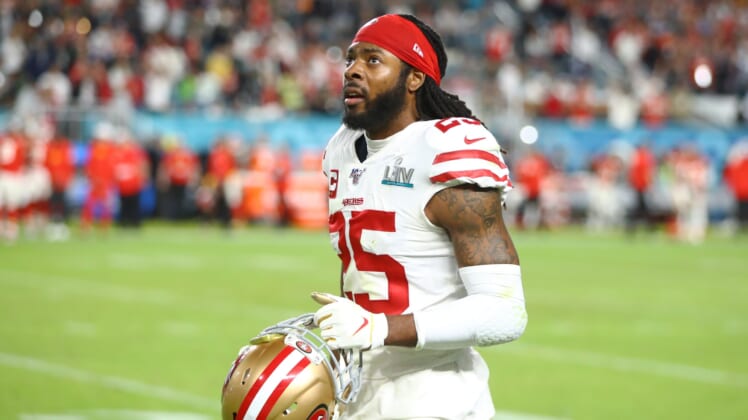 By his own admission, All-Pro San Francisco 49ers cornerback Richard Sherman is likely going to hit free agency during the 2021 NFL offseason.

Sherman is famously his own agent, and in recent remarks, was acutely aware of the numbers game that isn’t liable to work out in his favor.

If there’s some miracle that happens, then sure there’s an opening,” Sherman said regarding his prospects of playing for the 49ers in 2021, per ESPN.com’s Nick Wagoner. “But there’s 40 free agents and they’ll probably have $30 million or less in cap.”

With that key context established by the man himself, let’s take a look at the five best destinations for Sherman as he prepares to embark on free agency in 2021.

1. Richard Sherman to the Indianapolis Colts

This seems like the best fit on paper, taking into account a number of relevant factors. First, Sherman is used to top-flight coaching, and the Colts certainly offer that with head coach Frank Reich and defensive coordinator Matt Eberflus. The latter man has been buzzed about as a head coaching candidate himself, but provided he sticks around Indianapolis or his successor keeps a similar system in place, his schemes and Sherman’s skill set are a match made in heaven.

With a shout out to Stampede Blue’s Zach Hicks for his short clip of this in action, Eberflus has taken some of the principles of the Seattle Seahawks’ base Cover 3 defense and applied it to his unit in 2020. The results have been rather excellent, as Indianapolis boasts a top-eight pass defense entering Week 14.

As diehard football fans and certainly Sherman’s advocates know well, he rose to superstar status and won a Super Bowl as part of Seattle’s “Legion of Boom” secondary. Because Sherman played receiver at Stanford in college before making the switch to defense, and was in the Seahawks’ system for his whole career prior to signing a three-year deal with San Francisco, he can execute the Colts’ current schemes at an elite level.

Even if he’s lost a step or two, Sherman has such a high football IQ and can capitalize on the pattern matching elements of Eberflus’ base D better than most. That element of the scheme allows Sherman to anticipate what a receiver’s pattern will be, and encourages his knack for snatching interceptions.

Finally, the Colts are projected by OverTheCap.com to have the third-most cap space in the NFL for 2021. If they can use some of those riches to land Sherman and acquire an upgrade over Philip Rivers at quarterback, suddenly Indianapolis looks like a legitimate AFC contender next season.

2. Richard Sherman to the Cleveland Browns

The connective tissue here is pretty easy to see. Robert Saleh rightly gets a lot of credit as the architect of San Francisco’s defense, but current Browns defensive coordinator Joe Woods was the 49ers’ defensive backs coach and passing game coordinator in 2019. Last year was when San Francisco went to the Super Bowl, as Sherman returned to form as a second-team All-Pro.

Before jumping to this conclusion, there are a couple factors for Sherman to consider. Winning is indubitably important to him at this phase of his career, knowing the competitor he is. Has the Browns’ resurgence in 2020 been an aberration thanks in part to an easy schedule against the lowly NFC East, and aided by wins against Jacksonville and two against Cincinnati? Or is it a sign that the organization has finally turned a corner, with the team winning the games it should and progressing to better things in the next several years?

What Sherman also must determine is whether he can carve out a starting spot for at least one season in Cleveland, or if the coaching staff will instead favor keeping younger, gifted corners in Denzel Ward and Greedy Williams on the outside. It certainly helps that Sherman has an ally in Woods already with the Browns — again, provided he’s not swooped up for a head coaching vacancy.

One solution, in the event of Sherman’s arrival, is to deploy Williams in the slot. The second-year product out of LSU has been on injured reserve with a shoulder injury all season, and his combination of length and quickness in the slot would complement the skill sets of Ward and Sherman on the outside. It’s obvious the youthful, talented Browns secondary could use a veteran mentor, and there are few players in the NFL who can boast Sherman’s level wisdom, experience and individual accolades.

Assuming the Bucs run it back with Tom Brady under center, the appeal for Sherman joining Tampa Bay is obvious. Even in the absence of star nose tackle Vita Vea for a good chunk of 2020, defensive coordinator Todd Bowles has schemed up the NFL’s top-ranked rushing defense through three quarters of the season. Provided Bowles stays put for one more run with TB12, he’d definitely welcome someone like Sherman to upgrade the back end of his defense.

Jamel Dean is building off the strong form he showed in Year 1, but overall the Bucs’ defensive backs are really young. Sean Murphy-Bunting is also in his second season, Carlton Davis turns 24 in late December, and safety Antoine Winfield Jr. is starting as a rookie — albeit deservedly so. There’s an obvious leadership void here that someone like Sherman could better fill than, say, Jordan Whitehead.

Already loaded on the front seven, with a stout front and sensational linebackers in Lavonte David and Devin White, all that’s really missing is star power at cornerback. Bowles loves to dream up difficult looks to throw at quarterbacks, and with someone like Sherman who understands the X’s and O’s better than most, he’d be less susceptible to confusion and help his teammates avoid blown coverages.

Here’s the potential hang-up, and why Tampa Bay isn’t higher on Sherman’s list of destinations: the Bucs have a few key free agents like David, standout receiver Chris Godwin, pass-rusher Shaquil Barrett and defensive lineman Ndamukong Suh. All of them carry something of a price tag, and there’s only so much money general manager Jason Licht can spend. Provided the Bucs don’t retain one of their key defenders, Sherman’s value would go up, yet in any scenario, it might cost him a pay cut.

It’s a question of optimizing championship odds versus maximizing earnings potential. At least in Tampa Bay, the deck is stacked against Sherman to accomplish both those open-market objectives. Nevertheless, the Bucs are definitely a team to watch who could pursue Sherman. They did enough to persuade Brady to land there after all.

4. Richard Sherman to the Seattle Seahawks

How about a homecoming, back to where his NFL journey started? It’s complicated. Sherman was irked about the Seahawks releasing him while he was injured. Conversely, despite the fact that he signed with the NFC West rival 49ers following his time in Seattle, there can’t be too much bad blood, considering Sherman swapped jerseys with quarterback Russell Wilson after a game last November. Judging by how the 2020 campaign has gone, both parties stand to reap enormous benefits from a reunion.

Seattle is on course to yield the most passing yards in the NFL, largely due to a lackluster pass rush and the fact that its cornerback depth chart is nothing to write home about. It really hasn’t been ever since the band of Sherman, Earl Thomas and Kam Chancellor all went their separate ways.

Head coach Pete Carroll still runs a similar system, and Sherman has old teammates still there on his side of the ball that are still balling out in linebackers Bobby Wagner and K.J. Wright. You’d have to think they’d be thrilled to welcome Sherman back after seeing opponents sling the ball all over the yard.

Having an elite coach-QB combo is always key in the NFL, and who has it better than the Seahawks right now? Carroll and Wilson make for a phenomenal tandem; Sherman obviously knows them well. This doesn’t sound as crazy as it seemed upon first visiting. Sherman capping off his career with a second stint in Seattle actually makes a ton of sense.

Maybe “Giants” and “contender” don’t belong in the same sentence — or at least they didn’t until recently. Following a 0-5 start under coach Joe Judge, New York is in the midst of a stunning surge without superstar running back Saquon Barkley, going 5-2 to ascend to the top of the NFC East.

The weakness of that division and how quickly Judge has flipped the script from being a practice lap-assigning joke of a hire to legitimate coach is downright dizzying. Could it be enough to pry Sherman off the free-agent market?

This team has an old-school mentality. Judge is from the Bill Belichick coaching tree, and the fact that players are buying in suggests his detail-oriented, disciplinarian style is working in the Big Apple. Organizational culture is a big part of the equation when building a sustainable winner. Sherman has the qualities necessary to foster that in spades, and is a vocal leader in the way quarterback Daniel Jones isn’t. Sherman could be intrigued by the possibility of going to New York and enjoying a late-career stint there to help lift the G-Men back to true NFL prominence.

Giants defensive coordinator Patrick Graham has roots in New England and called plays for the Miami Dolphins in 2019 as part of Brian Flores’ staff. Graham’s schemes tend to rely on blitzes and man-to-man coverage. While the perception is that Sherman can’t hold his own in straight-up man, his Pro Football Focus grade, which is designed to isolate a player’s individual performance, is still among the NFL’s elite. Plus, having an emerging star at the position in James Bradberry starting opposite him would free up Sherman to be aggressive. He’d likely embrace the challenge of being tested on a more frequent basis.

But again, in this NFC East, there are various issues with all the offenses in Washington, Philadelphia and Dallas. Against all odds, New York is positioned for success in the next couple of seasons. That’s ideally aligned with Sherman’s timeline in terms of when he could still be a productive player, and the resultant contract duration he’d be seeking.

Related: NFL top 100 players: Richard Sherman checks in at No. 38