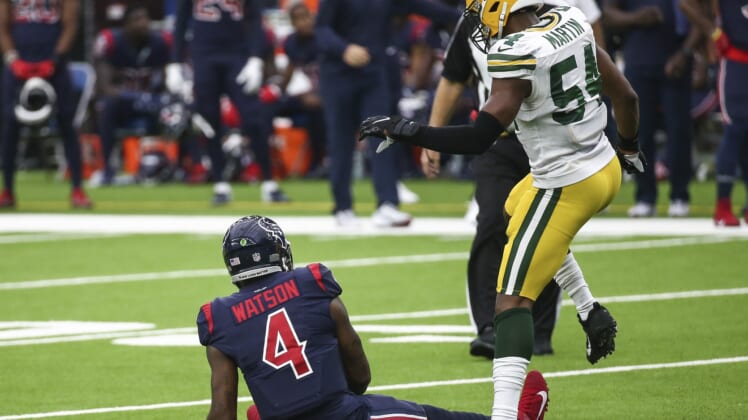 Houston Texans quarterback Deshaun Watson officially wants out. After weeks of speculation and leaks about his unhappiness with the organization, the Pro Bowl passer wants out. Despite his desire, though, Houston may not be prepared to give up anytime soon.

After hiring Nick Caserio as general manager, the Texans have now found their next head coach. David Culley, who has spent more than two decades as an assistant coach in the NFL, will be taking over for Bill O’Brien. With a new coach leading the charge, one who is praised throughout the league, the Texans seem hopeful that they can pull off the impossible.

Deshaun Watson officially requested a trade last week, with the news breaking on Thursday. After spending four seasons with what many believe to be one of the most dysfunctional organizations in sports, the 25-year-old quarterback made it clear he wants out.

According to The Athletic’s Aaron Reiss, the Texans remain adamant that they don’t want to trade Watson this offseason or in the future. Instead, Caserio, Culley and team owner Cal McNair plan to make efforts to repair the damaged relationship with the superstar quarterback.

That is far easier said than done for Houston. Watson is extremely upset with the organization, most notably McNair and team executive Jack Easterby. McNair promised the franchise’s star that he would have input on candidates to interview for general manager and head coach. Houston’s owner also said publicly that Easterby, who played a huge role in the DeAndre Hopkins trade and multiple firings, wouldn’t be involved in choosing who was hired.

Instead, Easterby reportedly flew with McNair to meet with Easterby and hired him. Watson learned about the news on social media, sparking more frustration. In addition, Easterby reportedly had some input in the hiring of Culley. Watson recommended Robert Saleh and Eric Bieniemy to become the Texans’ head coach. Saleh never received an interview and Bieniemy only got one after the turmoil went public.

Houston might also run into problems trying to repair this relationship. According to ESPN’s Adam Schefter, Watson hasn’t spoken to Caserio or Easterby and he didn’t respond to McNair’s phone calls in recent weeks.

Watson does have some history with the team’s new head coach. Culley befriended the quarterback at the Pro Bowl last year. But it became clear even before the hiring that Watson wanted out regardless of who the Texans hired as head coach.

If there isn’t any improvement in the relationship with Watson before the 2021 NFL Draft, then things could get interesting. Watson is willing to never play for the Texans again, which would mean sitting out training camp and even the regular season.

As all of this goes on, another Houston Texans star may want out. Rather than face a revolt from the locker room, the team could be forced into backing down and trading both players. Since Watson has a no-trade clause, he’ll also have say over where he lands.

Needless to say, Culley has walked into a mess. With this team likely headed into a multi-year rebuild, though, trading Watson may be in the organization’s best long-term interests. Even in an offseason where Matthew Stafford and Aaron Rodgers could be available, Watson easily becomes the top quarterback on the trade market.