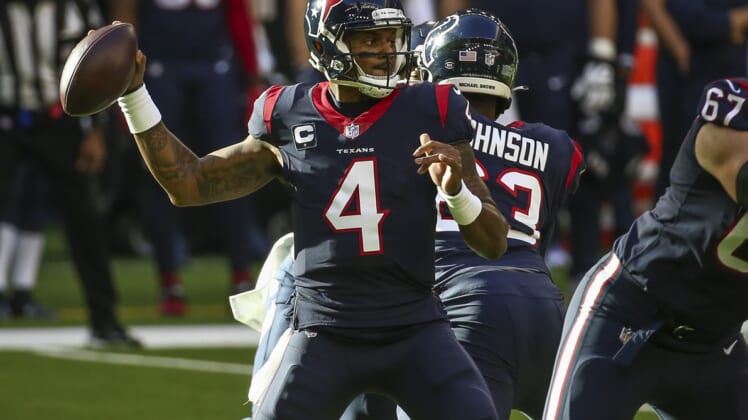 The Houston Texans have pushed superstar quarterback Deshaun Watson out of town, as he’s officially submitted a request to be traded this offseason.

Deshaun Watson trade request has been in pipeline for weeks

ESPN’s Adam Schefter explained how, despite the Watson trade demand being formally confirmed now, a prospective deal has been worked on by the front office for quite some time:

Culley must have taken the head coaching job understanding that Watson wouldn’t be around, which is a bummer for Houston fans all around.

Any team that doesn’t have a surefire franchise quarterback should be pursuing the opportunity to acquire Watson, who led the NFL with 4,823 passing yards in 2020.

Beyond the unappealing culture the Texans organization currently has, the team is projected to be $16 million over the salary cap in 2021. Moving Watson isn’t ideal, but it’ll at least provide Houston with some salary cap relief.

The key is, which team can offer a young, cheap and promising quarterback in a trade package? That’ll probably be who new Texans general manager Nick Caserio is most inclined to strike a deal with.

Miami and New York fit that description, as the teams currently have Tua Tagovailoa and Sam Darnold on their respective rosters.

Tagovailoa was the fifth overall pick in the 2020 NFL Draft, and has several years remaining on his rookie contract. Considering the Dolphins own the third overall selection in this year’s draft, plus an additional first-rounder and two second-round choices, they can offer any of those to Houston, along with future picks and Tagovailoa, for the rights to Watson. Hard for Houston to turn that down.

The Jets, on the other hand, have had Darnold for three seasons. Amid lots of turnover in the coaching staff and front office, Darnold has failed to bring Gang Green to prominence. They own the second pick in the 2021 draft, though, so even if the Texans aren’t sold on Darnold, if they managed to get that pick in a Watson trade, they could take whomever they view as the next-best rookie quarterback behind Trevor Lawrence.

Plenty of appeal for Houston in each scenario, save for the fact that both teams are in the AFC.

Watson is going to make whichever team he lands on an instant Super Bowl contender, and in the process, help the Texans pick up the pieces as they try to rebuild their franchise’s on-field product and off-field reputation.