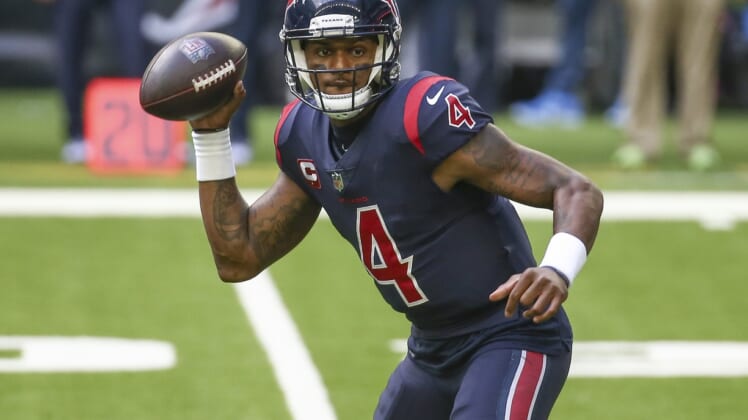 With all 32 teams currently at the Senior Bowl in Alabama, talk of a Deshaun Watson trade from the Houston Texans is reporting heating up.

By now, you already know that NFL rumors have suggested that Watson wants out of dodge. He’s not happy with the direction of the Texans’ organization, mere months after signing a long-term extension. For Watson, most of this has to do with the team’s search for a new head coach — one that remains unsettled.

The situation has now gotten to the point that Watson has threatened not to play another snap for the Texans. It’s unfixable given his issues with owner Cal McNair. We now have some more information coming from both Alabama and Miami.

“The chatter is getting louder, said one informed league source,” Adam Beasley of the Miami Herald noted Wednesday. “Watson feels like the situation (in Houston) is unfixable, and Miami is seen as the front runner behind the scenes.”

Talk about Watson potentially heading to South Beach is not new. These Dolphins have joined the division-rival New York Jets as top potential landing spots for the Pro Bowl quarterback. We are even at the point where informal trade parameters have been floated about.

That would include Miami sending Tua Tagovailoa to the Texans as the centerpiece in a potential Deshaun Watson trade. From there, multiple first-round picks would also have to be headed to Houston.

Remember, the Texans are expected to receive one of the largest hauls in a blockbuster trade in modern NFL history. Miami has the assets — first and second-round picks in 2021 from the Dolphins — included.

While the Fins are favored to land Watson, the Jets have also been bandied about as a potential destination. The star quarterback wanted Houston to seriously consider Robert Saleh as its head coach, which didn’t come to fruition before he was ultimately hired by the Jets. New York also has former top-five pick Sam Darnold and the No. 2 selection in the 2021 NFL Draft to entice the Texans.

Lesser options here would include the San Francisco 49ers, Chicago Bears, Denver Broncos and even the New England Patriots. New Texans general manager Nick Caserio worked with the Patriots for two decades before taking the job in Houston.

During his stint with the New England Patriots, Caserio worked with a front office that initially pushed back against trading Jimmy Garoppolo to the above-mentioned 49ers back in 2017. Interestingly enough, Garoppolo could be available for the front office head.

It is seemingly all talk right now regarding a Deshaun Watson trade. What we do know is that said talk is heating up big time during Senior Bowl week.