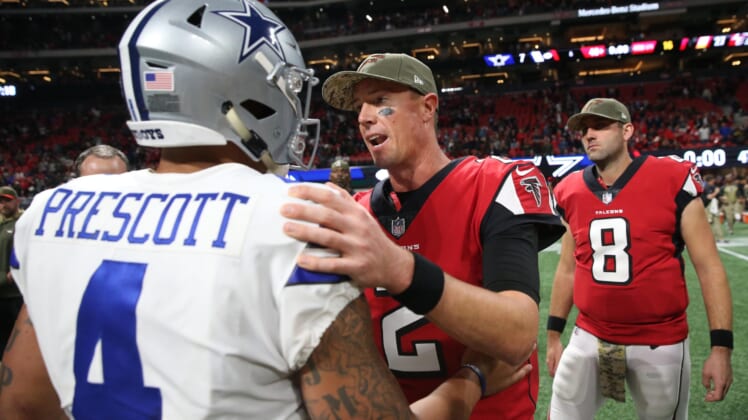 We’re expecting a ton of NFL quarterbacks to change teams once NFL free agency starts around the league in March. As many as 10 who started regularly for teams this past season could be on the move.

When looking at NFL quarterbacks and those who could change host cities, the likes of Matthew Stafford and Carson Wentz come to mind first. However, there’s another 10 or so who will make headlines during NFL free agency.

Let’s look at the 10 NFL quarterbacks who could change teams via a trade or free agency and rank them in each category.

NFL trades: Quarterbacks who could be dealt

There’s a chance that this former MVP could leave the Falcons once NFL free agency starts. It’s going to be all about the next head coach and general manager tandem in Atlanta after the organization fired its previous decision makers. If the Falcons are slated to head into full-scale rebuild mode, it makes sense for them to trade the 35-year-old Matt Ryan.

Among the most accomplished NFL quarterbacks of the past decade, Ryan is averaging 4,750 yards to go with 28 touchdowns and just 11 interceptions since the start of the 2011 season. If the Falcons do decide to trade the four-time Pro Bowler, teams likes the Denver Broncos, New England Patriots and San Francisco 49ers would certainly come calling.

NFL rumors suggest that the Lions are prepared to move off Matthew Stafford. Much like the Ryan situation in Atlanta, that depends heavily on whether Detroit opts to go into full-scale rebuild mode. Given just how much the team struggled under recently-fired head coach Matt Patricia and former general manager Bob Quinn, it makes sense for the Lions to just blow it up and start anew.

If so, Stafford would be among the top NFL quarterbacks on the trade market come spring time. Despite his team’s lack of success, the former No. 1 pick is still averaging 4,231 yards with 26 touchdowns and 12 interceptions per season over the past decade. That’s sure to draw interest from quarterback-needy team.

There’s certainly a chance that no team will show interest in a Garoppolo trade and he’ll hit NFL free agency. The injury-plagued Super Bowl quarterback is set to count $26.21 million against the cap in 2021. It’s also not a secret that the 49ers are looking to move on from him after the veteran suited up for just six games during the 2020 season.

Even then, Garoppolo’s track record as a winning quarterback in the NFL (24-8 career record) is hard to ignore. He also put up an all-time great statistical season in 49ers franchise history back in 2019. Are memories around the league short enough to ignore that? Time will tell on this front.

From one of the top young NFL quarterbacks to finding himself relegated to being a healthy inactive. Whatever happened with Wentz during a disastrous 2020 season with the Eagles, it’s readily apparent that he’ll move on to another NFL city in 2021. Wentz will reportedly request a trade after being benched in favor of Jalen Hurts.

There’s little doubt that Wentz will be traded come March. The question becomes how much interest there will be in his services given the quarterback’s bloated four-year, $128 million contract. A lot of that will depend on whether a team views him more like the quarterback we saw from 2017-19 or this past season. What we do know is that NFL free agency will not come and go without Wentz on another team. The Denver Broncos and New England Patriots are among those who could make sense.

Now that the Jets lost out on consensus No. 1 overall pick Trevor Lawrence, it’s an open question whether Darnold will return to the team for a fourth season. That will be up to general manager Joe Douglas and whatever coach he brings in to replace the recently-fired Adam Gase.

The former No. 3 pick and USC standout struggled without much help from a skill-position and coaching perspective in New Jersey. That included Darnold throwing just 45 touchdowns against 39 interceptions in 38 starts. A change of scenery could do the still-talented righty a world of good.

John Elway’s decision to step down as the Broncos’ general manager could change the narratives in Denver. Elway has been very bullish on Lock since selecting him No. 2 overall in the 2019 NFL Draft. It looked good during the Missouri product’s rookie season, but he regressed something terrible in 2020. In fact, Lock tied for the league lead in interceptions with 15.

Whoever the Broncos bring on as general manager will be looking for an upgrade in free agency. Perhaps, a trade for one of the starter-caliber NFL quarterbacks could be in the cards here. Heck, one possibility I am willing to float is that Lock is dealt from Denver to San Francisco for Garoppolo. Either way, the young signal caller could be done in Denver after two seasons.

It seems more likely than not that, if the Cowboys opt to move on from Prescott, it will be via a trade. Despite the devastating ankle injury this Pro Bowl quarterback suffered back in Week 5, he’d draw a ton of interest on the trade block during NFL free agency. This scenario includes Dallas placing the franchise tag on Prescott for a second consecutive year, only to trade him for at least a first-round pick.

However, there’s another scenario in play that suggests the Cowboys could move off the 27-year-old Pro Bowler completely. If so, Prescott could become one of the most-coveted NFL quarterbacks on the market since Peyton Manning what seems to be eons ago. The signal caller has put up nearly 11,000 passing yards with 73 total touchdowns and 23 interceptions since the start of the 2018 season.

At this point, the 39-year-old Rivers will either retire or remain in Indianapolis. It’s hard to imagine the family man moving on from the city in NFL free agency after just one season. That’s not the type of individual this pro has been since he entered the league all the way back in 2004.

Even then, there’s a scenario in play that could lead to Rivers opting to move on to another contending team. Perhaps, the Los Angeles Rams are not sold on Jared Goff as the solution. We’re talking about a Super Bowl contender who has been held by his his poor quarterback play. A return to Los Angeles makes some sense.

If we were to look at the Mitchell Trubisky situation a few months ago, it would have seemed unfathomable to believe he’d potentially land a starting job during NFL free agency. Now that the former No. 2 pick has shockingly led his Bears to a playoff appearance, it’s not even a foregone conclusion he’ll leave Chicago.

Since retaking the Bears’ starting job from Nick Foles, Trubisky has put up 11 total touchdowns against five interceptions while leading the Bears to an average of 30 points. At just 26 years old, the North Carolina product still has the talent to be among the best young NFL quarterbacks moving forward. Whether that’s with the Bears or another team remains to be seen.

A three-time Pro Bowler, Andy Dalton did an admirable job filling in for an injury Dak Prescott in Dallas this past regular season. It has led to speculation that the Cowboys might look to retain Dalton.

Whether that happens, depends heavily on his market during NFL free agency. Dalton, 33, completed 65% of his passes for 2,169 yards with 14 touchdowns and eight interceptions in nine starts.