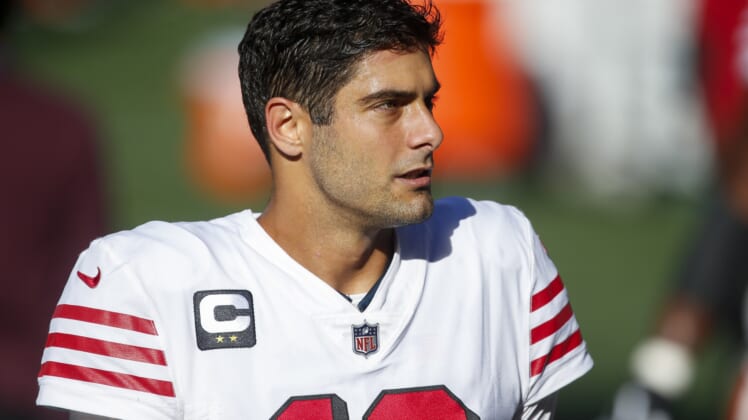 Is it possible the San Francisco 49ers pull off a Jimmy Garoppolo trade this coming offseason? NFL rumors suggest that this might very well be the case following another injury-plagued campaign for the embattled quarterback.

Sure Garoppolo is 22-8 as a starter in San Francisco and is coming off leading the team to a Super Bowl appearance. That’s fine and dandy. However, Kyle Shanahan and Co. are going to have their options this coming March. That could lead to Garoppolo being traded.

If this is indeed the case, here’s a look at four ultimate Jimmy Garoppolo trade scenarios.

Related: NFL stars who could change teams in 2021

Let’s start with the obvious first. Patriots head coach Bill Belichick did not want to trade Garoppolo to San Francisco back in 2017 in the first place. He was overruled by owner Robert Kraft and the higher ups. For Belichick, it was all about preserving his options should Tom Brady depart. That shockingly happened last offseason.

Now, the Patriots are stuck between a rock and a hard place at quarterback. Cam Newton has thrown all of five touchdowns in 13 starts this season and is not expected back in 2021. Jarrett Stidham fell out of favor heading into his sophomore season. Needless to say, the Patriots have a major need at quarterback. A Jimmy Garoppolo trade obviously makes the most sense here.

It’s apparent that the Lions are looking to move off veteran quarterback Matthew Stafford after a 12-year tenure that saw the team struggle despite his stellar play. At 5-9 on the season and following the firing of Matt Patricia, the Lions are also in full-scale rebuild mode. That’s not something the 32-year-old Stafford would want to partake in. At this point, the betting line is on Stafford moving on to another team.

So why a Jimmy Garoppolo trade? First off, Stafford is going to be an option for the 49ers this coming offseason. A Garoppolo-for-Stafford trade with San Francisco throwing in draft capital could make sense. Garoppolo would then be a stopgap option should Detroit find a quarterback in the top half of the first-round in next year’s NFL Draft.

The Jets’ shocking win over a vastly superior Los Angeles Rams team back in Week 15 could prove costly for the downtrodden organization. By capturing their first victory of the 2020 season, the Jets are now on the outside looking in when it comes to the Trevor Lawrence sweepstakes. While Justin Fields and Zach Wilson are solid options should New York land the second pick, neither one is seen as a sure bet like Lawrence.

The backdrop here is a Jets team that is likely to move on from young quarterback Sam Darnold after just three seasons. At the very least, New York will need a stopgap starter next season. As for a Jimmy Garoppolo trade, the 49ers could potentially take back Darnold and see if Kyle Shanahan can turn things around for the former top-three overall pick. They are already attempting that with Darnold classmate Josh Rosen.

Statistically speaking, Kirk Cousins is on pace for what would be a career-best season. In terms of team-wide success and the tale of the tape, Cousins is in no way the long-term solution in Minnesota. The team sits at 6-8 on the season and most of Cousins’ stats have come in garbage-time. Simply put, he’s not a big-game quarterback.

Would a Jimmy Garoppolo trade give the Vikings an upgrade at quarterback? I am not too sure. What we do know is that he’s a proven winner. It’s also important to note that the 49ers were interested in Cousins prior to acquiring Garoppolo back in 2017. That obviously stems from Kyle Shanahan’s time as Cousins’ offensive coordinator in Washington.