NFL trades: 5 blockbusters that could shake up 2021 offseason 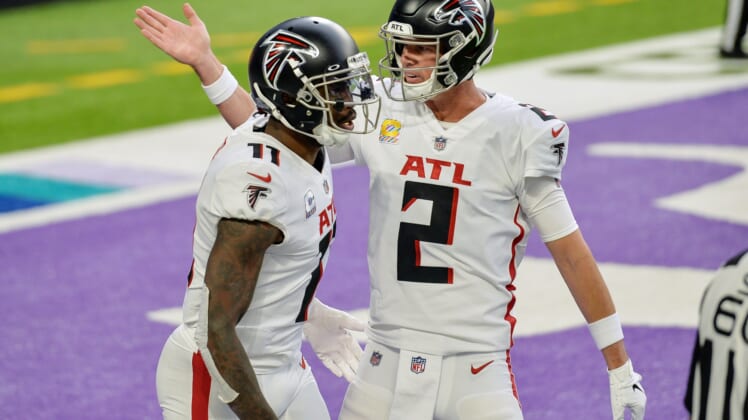 The 2020 NFL season is still going strong and just hit its three-quarter point. We didn’t see many NFL trades ahead of the deadline, primarily because of COVID-19 restrictions.

With that said, there’s going to be a plethora of moves this coming offseason that could shake up the foundation of the NFL as we know it.

Will the Philadelphia Eagles look to trade Carson Wentz? what will the Dallas Cowboys do with Ezekiel Elliott? Meanwhile, young quarterback Sam Darnold could be included in a pretty big trade.

It’s in this that we give you an early look at NFL trades that could shake up the league starting in March.

By now, it’s not a secret that Derek Carr has a contentious relationship with head coach Jon Gruden in Las Vegas. That has been the case since Gruden rejoined the organization back in 2018. What we do know is that these Raiders have been looking for a long-term replacement for Carr. Short of him leading the team to a deep playoff run in 2020, that’s not going to change.

As for the Eagles, they just recently benched Wentz in favor of rookie second-round pick Jalen Hurts. Recent reports suggest that Wentz could be riding the pine for the remainder of the season. He doesn’t seem to have a future in Philadelphia, especially if Doug Pederson is out as the team’s head coach. Acquiring Carr as a potential stopgap or moving him for more pick(s) could make the most sense here. Even with their quarterback issues, the Eagles have other areas they need to address. Potentially adding multiple picks while moving on from Wentz’s bloated contract makes the most sense.

Dallas might have something pretty special in second-year backup running back Tony Pollard. The former Memphis star is averaging a robust 5.3 yards per touch throughout his young career. Add in the fact that Pollard is under a rookie deal, and it makes sense for the Cowboys to seriously consider trading the struggling Elliott. He’s averaging under four yards per rush thus far this season and has had some major fumble problems.

At issue here is Elliott’s contract. He’s playing under a six-year, $90 million deal and is owed a whopping $30.2 million over the next two seasons. If Dallas were to look to trade Elliott, the return wouldn’t be great. Under this scenario, the team picks up a Pro Bowl-caliber cornerback and a mid-round pick. In return, Chicago hopes Elliott returns to earlier-career form, helping the team improve from its No. 31 rushing attack this season. It would be a win-win for both teams.

A lot of the focus in Indianapolis has been on these Colts potentially adding Carson Wentz to the mix. Head coach Frank Reich has a history with the quarterback dating back to his days as the Eagles’ offensive coordinator. That’s all fine and dandy. At issue here is the presence of 39-year-old signal caller Philip Rivers in Indianapolis. He’s likely going to want to play at least one more season.

If that is indeed the case, acquiring a former top-three pick in Darnold to learn behind Rivers for a season could make sense here. The Colts would pick up the fifth-year player option on Darnold’s contract and have him take over for Rivers in 2022. As for the Jets, this one is rather obvious. They have the inside slant on the No. 1 pick in the 2021 NFL Draft and will use it on Clemson quarterback Trevor Lawrence. There’s really no reason for New York to delay the inevitable.

To say that the San Francisco 49ers have been in the market for a true No. 1 receiver would be an understatement. They missed out on Odell Beckham Jr. a couple years back. Instead, Kyle Shanahan’s squad has been relying on talented young pass catchers Deebo Samuel and Brandon Aiyuk. Just imagine Shanahan being able to reunite with Jones in San Francisco. The 30-year-old pass catcher is averaging 104 receptions for 1,564 yards over the past six seasons.

Would Atlanta move Jones as a way to expedite its rebuild following the firing of Dan Quinn? It’s certainly in play, especially with Matt Ryan’s future in Atlanta (more on him below) in question. In lieu of picking up a single first-round pick for Jones, Atlanta goes with more quantity in that of two second-round selections. The team has holes everywhere. This would help a new unnamed general manager in Atlanta get off to a rip-roaring start by building through the draft.

NFL trades: Patriots get their quarterback in Matt Ryan

It’s either all in or a full-scale rebuild for the Falcons moving forward. Owner Arthur Blank would not commit to Ryan beyond the 2020 season, instead noting his future will be left up to Atlanta’s new head coach and general manager. At this point, it’s hard to envision Ryan wanting to take part in a rebuild at the age of 35. He’s still a top-end quarterback and could help lead another team to contention.

It’s in this that the Patriots make the most sense. Cam Newton has been a disaster under center for Bill Belichick this season. The head coach is 68 years old and is in the twilight of his career. Simply put, the Patriots must attempt to win short term. Moving a valuable first-round pick for a former league MVP, one that fits Josh McDaniels offense, makes a ton of sense. Expect a ton of Patriots trade rumors once the 2020 season comes to a conclusion.