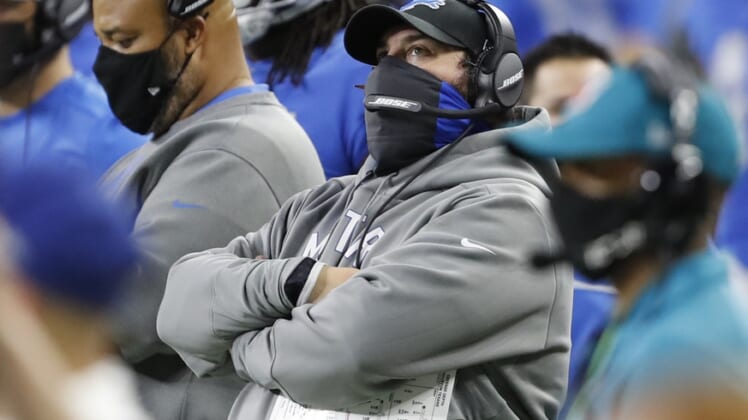 After another brutal showing, this time in a Week 12 loss to the Houston Texans, Detroit moves on from its head coach and general manager in one sweeping move.

On Saturday, the Detroit Lions announced that both Quinn and Patricia were relieved of their duties immediately.

Patricia was on the hot seat before the season, but ownership decided to give him another year to turn things around. When the team started 1-3 entering Week 6, he was in serious jeopardy of being fired.

The Lions briefly turned things around, winning their next two games and providing some hope for the organization. However, positive feelings didn’t last for long. Detroit was blown out by the Indianapolis Colts (41-21), Minnesota Vikings (34-20), Carolina Panthers (20-0), and the Texans (41-25) in recent weeks.

Sheila Ford Hamp, who took over as the club’s owner this summer, had enough after the disastrous showing on Thanksgiving Day. In two-plus years with the Lions, Patricia had a 13-29-1 record and the team’s defense was among the worst in the NFL.

With Patricia fired, offensive coordinator Darrell Bevell will step in as the interim head coach for the remainder of the season.

Quinn, who worked in the New England Patriots front office from 2000-’15, hired Patricia before the 2018 season. Coming off consecutive nine-win seasons under Jim Caldwell, Quinn said he wanted a coach who would raise the standard and take the Lions to the next level.

Patricia started his coaching career in the NFL with the Patriots as an offensive assistant in 2004. By 2006, he became the team’s linebackers coach and later served as the defensive coordinator (2012-’17).

Quinn went with the Belichick disciple and a coach he was very familiar with. Since that time, the Detroit Lions have returned to become one of the worst teams in the NFL.

After a six-win season in 2018, the team’s worst record since the Jim Schwartz era, Detroit spiraled further back in Patricia’s tenure. The Lions went 3-12-1 this past season, leaving many to speculate Patricia would be fired. Detroit stuck by him until Saturday, finally moving on after a 4-7 record this season.

It wasn’t just Patricia’s record that made this experiment a failure. Once again, we saw a member of Belichick’s coaching tree take the lessons they learned too far, all while failing to understand why it worked in New England.

Even before the season began, it was evident not everyone with the Detroit Lions liked Patricia.

Multiple former players have called out Patricia’s arrogance, approach and leadership in the past. When he played himself as the victim earlier this season for the team’s struggles, it drew heated criticism.

Patricia reportedly created an environment that players hated. He banned music, jewelry, and jersey swaps early on. It was just a part of the circumstances he creates to try and build his own culture. When the 2018 season ended, Lions’ players reportedly had a mimosa party to celebrate their freedom from Patricia.

Belichick’s methods likely aren’t as severe in New England. Even if they are, players have gone along with them because it produced six Super Bowl rings. Meanwhile, Patricia struggled to record six wins in his best season.

That wasn’t the Detroit Lions only issue. Hired for his defensive mind, Detroit’s defense ranked 31st in total yards allowed last season and is 30th in points allowed this season. It’s been the offense that kept the Lions in games.

The Miami Dolphins struck gold with Brian Flores. But with more coaching vacancies opening up, NFL teams should be more cautious about hiring Belichick’s assistants.