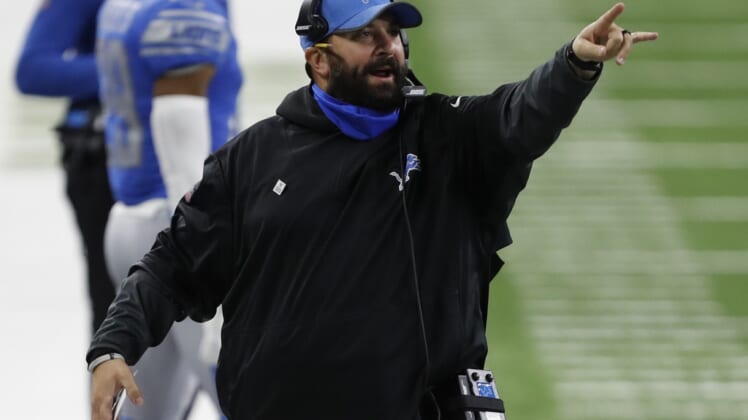 The Detroit Lions hired Matt Patricia in 2018 hoping he could help the team take the next step and become a perennial playoff contender. Following the team’s loss in Week 4 and Patricia’s ridiculous postgame comments, another ex-Lions’ player is taking a shot at his former coach.

Before heading into the team’s Week 5 bye, Patricia talked to reporters after Sunday’s loss. He was asked about the direction the team was headed and increasing doubts from fans and the NFL about his abilities to turn things around. Somehow, he found a way to deflect the blame on those who came before him.

The Lions fired Jim Caldwell following consecutive nine-win seasons in 2016 and ’17. Despite the Lions making the playoffs twice during Caldwell’s four-year tenure, with a 36-28 record over that span, Detroit felt it needed a new face to push the team over the hump.

Since hiring Patricia, the Lions have spiraled into the basement of the NFC North. They went 6-10 in Patricia’s first season and then finished 3-12-1 in 2019. Off to a 1-3 start in 2020, with another top-10 pick seemingly imminent, Patricia puts the team’s woes on those before him.

“I think when I came to Detroit, there was a lot of work to do and that’s what we’re trying to do,” Patricia said, via Pro Football Talk. “But, talking about this year, we’re talking about right now, these first four games and obviously today wasn’t good enough.”

When general manager Bob Quinn fired Caldwell, he made it clear that 9-7 records weren’t up to the organization’s standards. So, he brought in a familiar face from his time with the New England Patriots. Instead of replicating the Patriots’ success, or even fielding a .500 club, the Lions have 10 victories in 36 games with Patricia.

Not only is the team struggling to win, often suffering double-digit losses, but Patricia seemingly can’t even win over his players. As we saw once again, those who got away from Patricia have no reservations about calling out Detroit’s coach.

After seeing Patricia’s comments, Seattle Seahawks safety Glover Quin relished in the opportunity to roast his former coach. Quin, who has ripped Patricia’s arrogance in the past, seemed to get a kick out of the coach deflecting the blame for the Lions’ struggles.

Of course, Quin isn’t the only former player to take aim at Patricia. Philadelphia Eagles cornerback Darius Slay immediately started expressing his opinions about Patricia once he was traded away from the Lions. It wasn’t the first time he took a swipe at Patricia either, making it emphatically clear he had zero respect him as a person or coach.

Patricia made it through a disastrous 2019 season, but he likely won’t be as lucky this time around. With a new owner running things in Detroit, Patricia is one of the early favorites to be the first NFL coach fired.