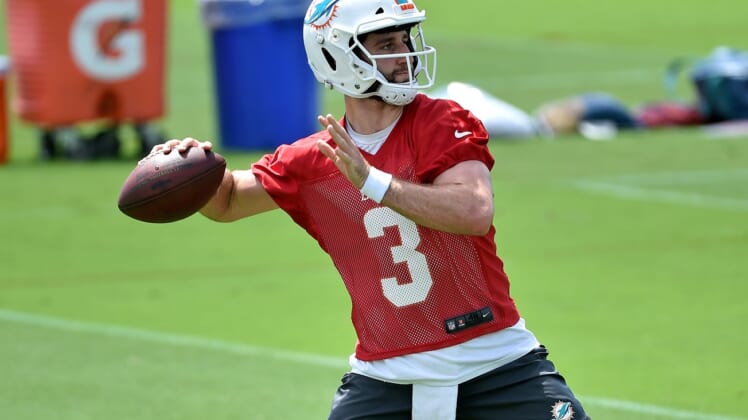 NFL news has not been friendly to the defending NFC champion San Francisco 49ers. Quarterback Josh Rosen has not necessarily had himself a great career since the Arizona Cardinals made him a top-10 pick in the 2018 NFL Draft.

So it stands to reason that the two sides might actually find a mutually-beneficial relationship moving forward. We’ll soon find out if that is indeed the case.

According to ESPN’s Adam Schefter, Rosen has been signed off the Tampa Bay Buccaneers’ practice squad and on to the San Francisco 49ers’ active roster.

This NFL news comes with the 49ers dealing with a plethora of issues at the quarterback position. Starter Jimmy Garoppolo remains sidelined with a high-ankle sprain. He’s unlikely to play over the final two games of the season. Backup Nick Mullens suffered an elbow injury in Week 15’s loss to the Dallas Cowboys and might have to undergo surgery.

“We had an idea it could be serious after the game, but they had to get the MRI and look if any ligaments are torn,” 49ers head coach Kyle Shanahan told reporters about Mullens on Tuesday. “They want to let the swelling go down to know the exact severity of it and a plan for surgery and everything, but that does sound most likely. We’ll see when he does it, but that’s what it sounds like.”

Meanwhile, fourth-stringer Josh Johnson was just placed on the reserve/COVID-19 list. That would leave third-stringer C.J. Beathard as the starter against the Arizona Cardinals this coming Saturday.

It’s just a continuation of the 49ers dealing with injuries and multiple COVID-19 outbreaks during what has been a disastrous season for the franchise.

NFL news: What the Josh Rosen signing could mean for the QB and his new team

Let’s start with the 23-year-old Josh Rosen first. Selected No. 10 overall by Arizona back in 2018, he was a victim of circumstance in the desert more than anything else.

The Cardinals ultimately landed the No. 1 pick in the following year’s draft, picking up Heisman winner Kyler Murray in the process. While the team initially pushed back against the idea that it was going to move on from Rosen after one season, NFL news suggested that it had already made the decision to draft Murray during the spring of 2019.

Ultimately, Rosen was traded to the Miami Dolphins during the 2019 NFL Draft after throwing 11 touchdowns against 14 interceptions in 13 starts as a rookie. Rosen then started just three games with the Dolphins last season before being waived back in September.

In opting to sign with the Buccaneers’ practice squad a couple days later, Rosen chose that option over joining another teams’ active roster. That’s primarily because he wanted to learn behind GOAT Tom Brady.

Josh Rosen did have the option to remain with the Buccaneers’ practice squad rather than signing in San Francisco. This seems to suggest that he’ll be given a chance to show his stuff over the final two games of the season. It’s not a bad situation working under offensive genius, 49ers head coach Kyle Shanahan.

From a 49ers perspective, this also makes a ton of sense. NFL news surrounding the team during this coming offseason will primarily focus on the quarterback position. Jimmy Garoppolo could be done in the red and gold. Mullens and Beathard are non-starters as it relates to taking over.

Why not give Josh Rosen a two-game window to prove that he can at least be an option in the 49ers’ quarterback room next season? Certainly, he’s not going to go be appointed the 2021 starter.

At the very least, the former UCLA standout can prove to either the 49ers or another team that he deserves something more than practice squad status.