Could a Jared Goff trade happen in 2021 even though the Los Angeles Rams gave him a huge contract extension? Yes. Yes, it very well could. 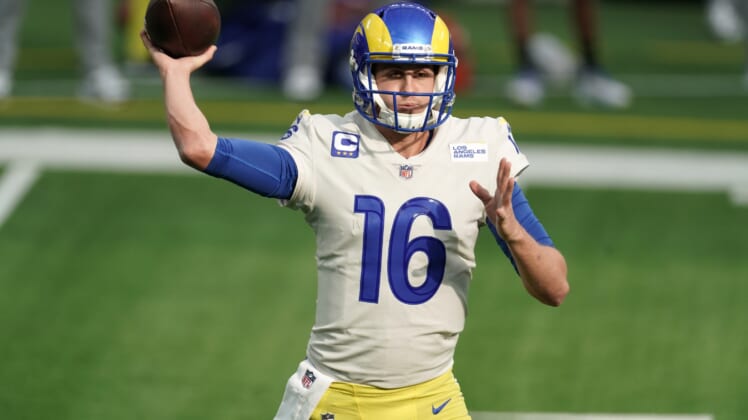 The Los Angeles Rams have thrived during the Sean McVay era, but it’s becoming clearer by the day that an upgrade at quarterback is necessary. Thus, a Jared Goff trade prior to the 2021 campaign could definitely be on the horizon.

Sound ridiculous? Why? Because Goff’s contract is too massive? Because he’s 42-20 as a starter under McVay? Because starting over is too risky, and things are going well enough with Goff as they are?

Potentially valid points. Regardless, humor yourself with this speculation. Much to the surprise of yours truly, this scenario isn’t as implausible as it might seem.

If we know anything about the Rams front office and general manager Les Snead, the team isn’t shy about sacrificing tomorrow’s assets to get better today. Heck, they made a bold move up in the draft just to select Goff No. 1 overall in the first place.

That was just the tip of the iceberg for what Snead had in store. Even McVay’s hiring was at first a seemingly head-scratching choice, considering he was only 30 years old at the time.

Since the Rams did qualify for the playoffs for the third time in four years this past season, from a team perspective, those splashy acquisitions have ultimately paid off.

To bolster the secondary, L.A. traded two first-round picks for cornerback Jalen Ramsey, which has largely been a massive success. They’ve even, in the past, traded a first-rounder for receiver Brandin Cooks, who had a career-high 1,204 yards receiving in 2018, helping the team advance to the Super Bowl.

Given that track record of maneuvers just in the Goff-McVay years, is it so far-fetched that Los Angeles’ current signal-caller could be shipped out of town if a seemingly obvious upgrade is available?

None of this is a knee-jerk reaction to Goff failing to beat the previously 0-13 New York Jets down the stretch, or caving to the pressure again in losing to Green Bay in the Divisional Round of the playoffs.

Before McVay arrived, Goff was a mess as a rookie, going 0-7 as a starter and looking like an immediate bust. Once McVay exploded onto the scene, Goff shined in his first two full seasons under center, posting a passer rating over 100 and averaging well over eight yards per pass attempt with a touchdown-to-interception ratio of 50-to-19.

Since then? Mostly a mess. The 2019 campaign saw the Rams beset by injuries on the offensive line, which really put a wrench in the immobile Goff’s ability to operate. He threw 22 touchdowns against 16 picks, fumbled seven times and had an 86.5 passer rating.

OK, maybe that was a mirage. Turns out it wasn’t. Even this year, with L.A. boasting the NFL’s No. 1 defense under coordinator Brandon Staley and a much-improved rushing attack, Goff has been a liability. The 26-year-old had 20 touchdown tosses, 13 interceptions and a 90.0 passer rating that ranked 23rd among 36 qualifiers in 2020.

Mind you, this is while operating a system masterminded by the most brilliant young head coach of the modern era in McVay. How is that not a red flag, and an obvious indication that it’s time to move on after witnessing a four-season sample size?

Thanks to a four-year contract extension worth $134 million that kicks in at the start of 2021, Goff’s deal is widely viewed as untradeable. However, according to Over The Cap’s calculator, the savings Los Angeles would enjoy if Goff is traded after June 1 amounts to $27.825 million, because the team can spread out the dead money over multiple years.

Wow. Why wouldn’t they do this? Here’s the kicker: the 2021 NFL draft is slated to take place on April 29. If Snead and Co. wanted to maneuver and draft Goff’s successor in the first round, they wouldn’t be able to package him as part of the deal without incurring a big cap hit for 2021. The Rams are already projected to be $27 million over the cap next season. Easy to see where the problems lie here.

On the other hand, riding out a tense month or so before it makes financial sense to deal Goff away should be worth it in the long run. The cap ceiling has been lowered a ton primarily due to COVID-19, and is slated to spike in a big way for the 2022 season. Not having Goff’s exorbitant contract will increase LA’s cap flexibility in the coming years, and a cheaper option is definitely attainable either through the draft or a trade.

If a Goff deal is in the works leading up to the draft, don’t be shocked to see the Rams be proactive and move up for a quarterback like Zach Wilson, Justin Fields or Mac Jones. They could even trade for someone still on a rookie contract, such as Sam Darnold of the Jets or Jacksonville Jaguars young gun Gardner Minshew, though Los Angeles will probably have its sights aimed higher.

Frank Reich is one of the most underrated, excellent coaches in all of football. Like McVay does in L.A., Reich calls the plays in Indianapolis — and has helped Philip Rivers find the fountain of youth this season in leading the Colts to a playoff berth. However, Rivers just retired, and the Colts could really use some extra juice at the position. That’s where Goff could easily step in and present a potential improvement under center.

Given how awful Carson Wentz has looked in Philadelphia since Reich left the Eagles staff, it’s clear the coach has a serious knack for getting the most out of anyone who runs an offense.

Plus, the Colts are one of the few teams with enough cap space to take on Goff’s hefty contract, and they’d solve their QB dilemma without having to sacrifice draft assets to move up and pick a younger player.

The entire premise of this article suggests that Goff will flop whether he remains in Los Angeles or not. In the event he goes to play for Reich, though, perhaps the change of scenery could lead Goff to change course and play the best football of his NFL career.

Related: Indianapolis Colts rumors: Carson Wentz could be option for team in 2021

As opposed to going to a stable, strong organization in Indianapolis, this move to the nation’s capital wouldn’t be the most ideal scenario for Goff’s next step.

The Football Team won the NFC East, and actually hung with the Tom Brady and the Tampa Bay Buccaneers on Super Wild Card Weekend with Taylor Heinicke at quarterback. They’d released Dwayne Haskins as the future of the franchise already before then, and Alex Smith’s comeback story feels like it’ll be limited to 2020, which in and of itself is inspiring and miraculous.

With all that as context, though, Washington needs to address the quarterback position. At this point, Heinicke, Smith and Kyle Allen aren’t going to cut it as a viable 2021 plan, nor is somebody the Football Team might get later in the 2021 draft.

As long as Washington makes the proper salary cap maneuvers, they’d have space to trade for Goff in 2021. The standard for quarterback play hasn’t been set too high, and Goff would at least face some weak competition in the division while he gets settled into his role as the Football Team’s long-term field general. The culture really is changing in the nation’s capital under coach Ron Rivera, and a weapon or two added to the offense should go a long way in helping whomever is the Football Team’s QB next season.

As the Pats and coach Bill Belichick continue their search for Brady’s long-term successor after the Cam Newton experiment didn’t really work out, perhaps Goff is the man for the job.

Like Brady, Goff is definitely a traditional, drop-back passer who would operate New England’s system efficiently with quick decisions and not be asked to do too much.

Whatever his flaws may be, Goff feels like a superior option to whoever the Patriots have in their plans at this point. Presumably, Newton won’t be with the team in 2021, and funnily enough, he and Goff could actually switch spots if this Foxborough scenario comes to fruition.

The obvious problems here are that Goff wouldn’t have near the weaponry at receiver he’s enjoyed with the Rams between Cooper Kupp and Robert Woods. But if Belichick can get his defense back on track, and the offense can build around the rushing attack with its stable of talented ball-carriers in Damien Harris, former first-round pick Sony Michel and others, perhaps Goff will find a new home in New England.

Good news for the Patriots, too, is that Goff won’t cost much in terms of high draft picks or players. The Rams don’t have a ton of leverage at this point because of how lowered Goff’s stock is.