There was plenty to celebrate during Saturday's pro football slate, but here, we're looking at the worst performances from the 2021 NFL Divisional Round so far. 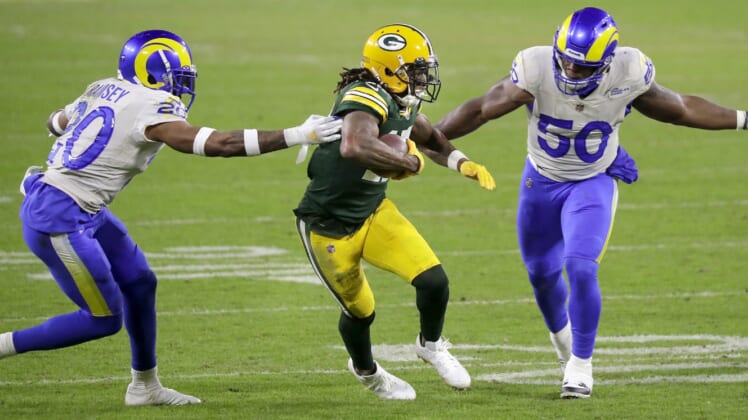 Day 1 of the 2021 NFL playoffs’ Divisional Round is in the books, and it was certainly an entertaining Saturday on the gridiron.

Aaron Rodgers led the Green Bay Packers to a 32-18 triumph over the Los Angeles Rams’ might defense, while the Buffalo Bills pulled out a hard-earned 17-3 win over the Baltimore Ravens at home to advance to the AFC Championship Game.

There were several standout players during this phase of the NFL postseason, but for now, let’s focus on where things got ugly and break down the worst performances from Saturday.

Rams defensive coordinator Brandon Staley is deservedly earning acclaim as a head coaching candidate, and he did an excellent job shutting down the Seattle Seahawks on Super Wild Card Weekend. On this Saturday at Lambeau Field, though, Aaron Rodgers and the Green Bay Packers offense was too much to handle.

Now, let’s be fair: Superstar defensive lineman Aaron Donald was definitely banged up for Los Angeles, which limited his ability to impact the game. But even with Donald hurting last week, the Rams picked up the slack.

That wasn’t the case against Rodgers, who threw for 296 yards and accounted for three total touchdowns. His pretty TD pass to Allen Lazard in the fourth quarter iced the victory for Green Bay, vaulting the Packers into the NFC Championship Game for the second consecutive time.

Staley made halftime adjustments and held the Packers mostly in check until that decisive play. However, the early momentum Green Bay built proved too difficult to overcome, as the Rams also allowed 188 yards on 36 attempts, which comes out to over five yards per carry. Especially against a lethal passer like Rodgers, that’s just not going to cut it.

Credit the Rams field general for gutting it out through a broken right throwing thumb. If we’re talking about how Goff fared as a passer on Saturday, he wasn’t so bad, completing 21 of 27 passes for 174 yards and a score.

When Los Angeles were faced with obvious passing situations, though, Goff was in trouble. Even with Cam Akers providing 90 carries on 18 carries out of the backfield, there were instances where Goff just shut down.

Instead of climbing in the pocket, or being decisive and escaping to make a play on the move off schedule, there was nothing from Goff in terms of improvisational ability. If memory serves, all four sacks the Packers came from pressure up the middle, and Goff was a complete statue.

Because he has such poor pocket presence when the heat is on, Los Angeles must consider a Goff trade this offseason and then upgrade the position with a more nimble athlete like Cam Newton. Even he’s an upgrade over Goff at this point due to how simple Sean McVay makes his offense, and how much it’d benefit from an athletic QB running the show.

At least the Rams defense had something of an excuse in facing arguably the greatest quarterback of all-time in Rodgers without a healthy Donald. Goff doesn’t have anyone to blame but himself for his inability to deal with a collapsing pocket this far into his career.

The game plans between Roman and his Bills counterpart Brian Daboll couldn’t have been more polar opposite. Whereas the training wheels were essentially on Baltimore’s offense with Lamar Jackson at the controls, Buffalo began the game by airing it out and letting Josh Allen cook, so to speak.

Although Allen missed a wide-open Stefon Diggs for a touchdown in the first quarter and saw another potential TD glance off Gabe Davis’ hands earlier in the game, it was clear the Bills were playing to win, while the Ravens were playing not to lose.

Sometimes, playing not to lose is precisely what the occasion calls for. In this instance, it wasn’t the way for Roman to go. Thirteen of Baltimore’s first 17 plays were rushing attempts, and those are all presumably on a predetermined script.

If Jackson is meant to be the long-term face of the franchise for the Ravens, he should’ve been more entrusted to air it out. Roman could’ve mixed in more play action at the start of the game. Instead, the vanilla game plan created a shaky foundation, and in part because Roman can’t scheme up anything creative through the air, much less in the red zone, Jackson threw a pick-six late in the third quarter that essentially guaranteed a Baltimore loss.

It’s really baffling that Roman doesn’t have more sophisticated play designs in the passing game. It seems as if Jackson is freelancing most of the time and making most of his yardage off scramble drills. Either Roman needs to adjust or a change is needed to push Jackson into the presumed prime of his career.

There’s a fine line between trusting your stud young quarterback and, um, being irrational.

Daboll, who’s reportedly front-runner for the Los Angeles Chargers coaching vacancy, seemed like he had one foot out the door with the seemingly rash way he was dialing up plays on Saturday night.

Leave it to ESPN’s Field Yates to fully illustrate the sheer insanity of the Bills’ imbalanced offense:

That’ll give you a headache to even look at, much less witness on live television. Allen has indubitably reached new heights in his third year as a pro, and deserves all the confidence in the world from his coaching staff and long-suffering Buffalo fanbase. But let’s be real: Who wanted the Bills to completely abandon the run?

Letting the Ravens dominate time of possession for so long is playing with fire. They love to run the ball, and if Buffalo were to wear down and lose its sliver of a lead, well, Baltimore would simply just play for the pass constantly since that’s all Daboll was calling.

What a head-scratching plan of action this was. Finally, Daboll gave Devin Singletary three carries on the first possession after the halftime intermission. The result? How about a gains of nine and 12 on two of the totes, which freed up the Bills’ ability to execute a three-yard TD pass off a screen to Diggs from Allen.

The most accurate kicker in NFL history. That’s the standard Tucker has set for himself. He missed a field goal in the Wild Card Round, and went wide left on his first Divisional Round attempt, and then wide right.

Both kicks went BOING off the goal posts. Tucker was in utter shock witnessing what he’d done, as if Mother Nature, his biological rhythms and the universe itself had all betrayed him. Which of course they did to a degree.

Tucker isn’t accustomed to missing. He’s always clutch, reliable and haunts the dreams of any opponent the Ravens face on any given day. If Tucker trots out on the field with the chance to win a game, chances are, he’s going to convert.

So, when he kept missing amid such a low-scoring game, Tucker’s failures loomed larger than they otherwise would in a different situation. His letdown stands out the most just because of how precise he usually is, and considering how, when Jackson threw his untimely interception, the Ravens could’ve been setting up for a go-ahead field goal.