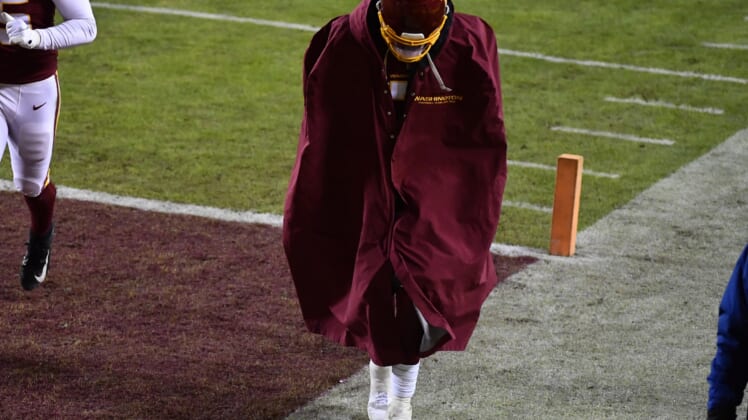 Dwayne Haskins, the No. 15 overall pick in the 2019 NFL Draft, was released by the Washington Football Team on Monday.

The move comes just a day after he started for the club in Week 16, delivering a woeful performance that may cost the team a playoff spot.

Washington selected Haskins in the 2019 NFL Draft, hoping he would blossom into being their franchise quarterback. Less than two full seasons into his NFL career, the 23-year-old is being waived by the organization that once believed in him.

Haskins entered the season as the starter, but it didn’t take long for him to lose the job. After four dreadful performances, head coach Ron Rivera finally pulled the plug and made Kyle Allen the starter. The demotion didn’t end there, however, with Haskins being moved down to the No. 3 spot on the depth chart and ruled inactive for games.

When Allen went down with a season-ending leg injury, it partially opened the door for Haskins. With Alex Smith stepping in as the starter, it allowed the second-year quarterback to become his backup. Opportunity knocked on Dec. 13, when Smith suffered a calf injury against the San Francisco 49ers and Haskins took over.

With his team in the driver’s seat for the NFC East, Haskins simply had to protect the football to help this team make the playoffs for the first time since 2015. Instead, Washington lost its next two games with Haskins as the starter.

After being benched in Week 16 with Taylor Heinicke taking over, Haskins’ tenure in Washington comes to an end. Between his poor play and immaturity issues, the blame for becoming a first-round bust will fall squarely on Haskins’ shoulders.

While some blame for Dwayne Haskins’ struggles can fall on the Washington Football Team, the quarterback’s woeful play in his NFL career is impossible to ignore.

After winning the 2019 Rose Bowl MVP and starring at Ohio State, Haskins immediately experienced difficulties adjusting to the NFL. After appearing in only 14 collegiate games, he didn’t look remotely prepared for the highest level.

Washington hoped that hiring Scott Turner as offensive coordinator would help Haskins see improvements in his second season. Instead, another year in the NFL brought even more difficulties for the 23-year-old quarterback.

Washington was already preparing to release Haskins in the offseason. Sunday’s performance proved to be the final star, with the organization throwing in the towel.