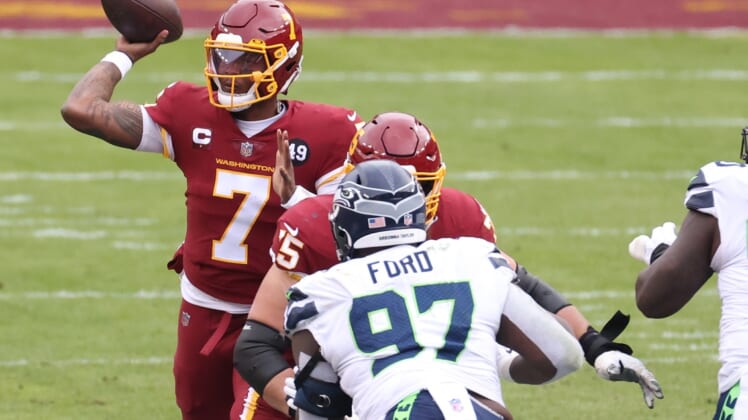 The Washington Football Team will rely on quarterback Dwayne Haskins to clinch the NFC East Sunday afternoon when they take on the New York Giants. This, despite NFL rumors suggesting that Washington could very well move on from the former first-round pick following the 2020 campaign.

Haskins, 23, is forced into action due to the calf injury that will cost starter Alex Smith his second consecutive game. For head coach Ron Rivera and Co., this is not a great situation given that Washington just fined Haskins a ton of cash for another violation of the NFL COVID-19 protocols.

A stud at Ohio State, Haskins’ career in D.C. has taken a turn under Rivera as a sophomore. It could now soon lead to his departure from the Washington Football Team.

“The Washington Football Team is juggling a difficult situation at quarterback entering Week 16, which precipitated the need to keep embattled quarterback Dwayne Haskins around after he again violated COVID-19 protocols, but sources say that it is virtually certain he will not be back in 2021,” CBS Sports NFL insider Jason La Canfora reported on Sunday.

This shouldn’t come as too much of a surprise. Earlier in the season, when then-starter Kyle Allen was injured, Washington relegated Dwayne Haskins to third-string duties. It led to NFL rumors suggesting that this marriage was soon to end on a bitter note. While Washington did not move on from Dwayne Haskins then, the time will be coming.

It’s not only about Haskins’ perceived immaturity off the field. He’s struggled when on the gridiron, too. The former No. 15 overall pick has thrown 12 touchdowns against 12 interceptions while averaging 177 passing yards in 12 starts across two seasons. Washington has posted a 3-9 record in said starts.

NFL rumors: What does the Washington Football Team do at quarterback?

Alex Smith is likely going to earn the NFL Comeback Player of the Year award after returning from a devastating leg injury he suffered back in 2018. He’s 10-5 since joining Washington the previous season. All other quarterbacks for the long-downtrodden organization boast a combined 6-25 record since the start of the 2017 season.

In no way does this mean Smith is the long-term solution in D.C. Rather, the expectation is that Washington will look for a young quarterback. That might not be a viable option during the 2021 NFL Draft with the team picking in the bottom half of the first round.

Either way, Washington is slated to move on from Dwayne Haskins regardless of how the remainder of the 2020 season plays out. There should be a somewhat decent trade market for the former Buckeye standout depending on what WFT demands in a deal. Right now, it can’t be more than a mid-round pick.

For Haskins, this could act as a potential fresh start. Needless to say, things are not going swimmingly between the still-young quarterback and his organization. A new NFL city could work wonders for Haskins progression from the enigmatic and immature figure that we have seen thus far in the nation’s capital. Time will tell on that front.