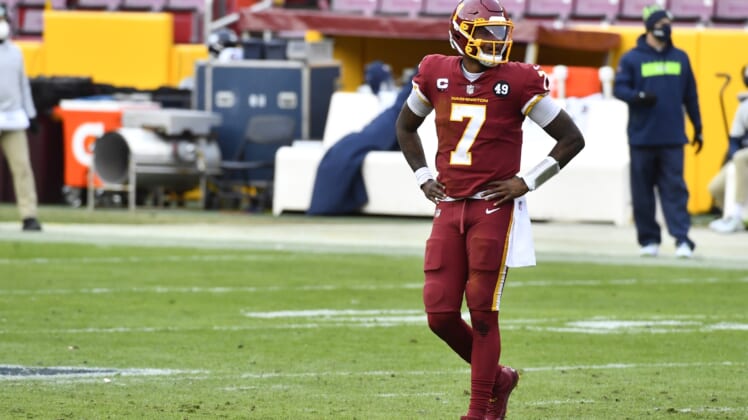 Washington Football Team quarterback Dwayne Haskins can’t really afford any off-field missteps in addition to his underwhelming performance on the gridiron, yet continues to squander his good will with the franchise he hopes to lead for years to come.

After a 20-15 loss to the Seattle Seahawks, Haskins was partying at a strip club without a mask, which is in violation of the NFL’s COVID-19 protocols.

Going to such an establishment to blow off some steam following a loss is generally a bad look. That’s not really what you’d consider “franchise quarterback behavior.” But it wouldn’t be so bad if it weren’t, you know, the height of a surge in COVID-19 cases as the United States continues to suffer from the global pandemic.

Here’s the remorseful statement Haskins posted to Twitter, though you can’t see it since he limits who can view his account:

“I want to publicly apologize for my actions this past Sunday. I spoke with Coach Rivera yesterday and took full accountability for putting the team at risk. It was irresponsible and immature of me and I accept responsibility for my action. I also want to apologize for creating a distraction for my team during our playoff push. I will learn and grow from this and do what’s best for the team moving forward.”

It’s pretty on-brand for key public figures in the nation’s capital to downplay or downright neglect COVID-19 protocols, so maybe Haskins had a bad example to take after. Seriously though, at every turn, it feels like Haskins is asking to lose his chance at a long-term starting job in Washington.

Haskins couldn’t stay on the field ahead of the likes of Kyle Allen to begin the 2020 season due to performance issues, and has been a flailing mess since returning to the lineup to fill in for the injured Alex Smith. The 23-year-old has a 77.7 passer rating this season, and threw two costly interceptions in the loss to Seattle, which put a dent in the Football Team’s playoff hopes even as they continue to lead the horrid NFC East with a 6-8 record.

At this early phase of his life and career, it’s no good giving up on Haskins entirely. The question is: can he overcome perpetual dysfunction in a troubled organization and a lackluster supporting cast on offense? to date, there’s no evidence to suggest that’s possible.

With all the toxicity that surrounds Washington’s franchise, there are signs corners are being turned. Smith’s comeback story from a life-threatening injury is inspiring to say the least, and head coach Ron Rivera is also helping change the culture for a team that’s accustomed to chaos and losing on a consistent basis.

It’s a stretch to suggest Allen can lead this team into the future, and Smith’s medical history and declining physical skills don’t bode well for his outlook, either. Disappointing as Haskins has been as a first-round pick, a case can be made that he’ll get back on track with improved continuity on the coaching staff and more weapons surrounding him next season.

On the other hand, isn’t it just as possible Haskins doesn’t “get it” and never will?

Much depends on whether the Football Team can make the playoffs as NFC East champions. If not, they stand to have a far higher draft pick this coming year and could opt to acquire a different signal-caller to either compete with Haskins or replace him as the hopeful long-term solution entirely.