The Washington Football Team has a great defense, but could use an upgrade at quarterback. Who are the strongest replacement candidates for 2021? 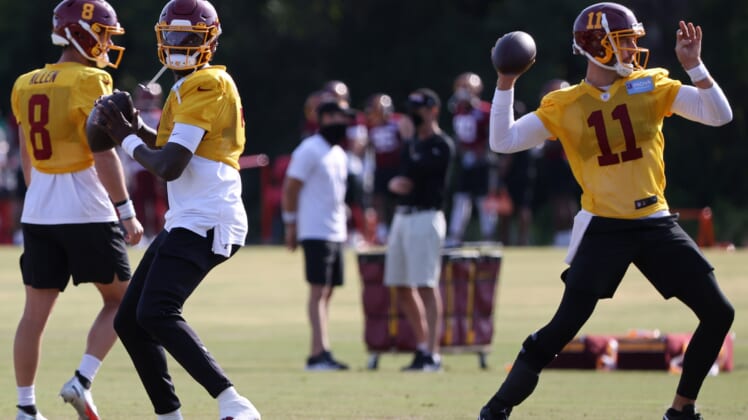 The Washington Football Team won the NFC East division, but was forced to release first-round bust Dwayne Haskins, parted ways with Alex Smith this offseason, and can hardly count on Taylor Heinicke as a legitimate starter despite his impressive playoff start.

Although Smith deservedly won Comeback Player of the Year, he was injured again down the stretch and doesn’t move around like he used to. The two parties both decided it was best to go in different directions. Haskins’ immaturity on and off the field got him cut loose.

Then, there’s Heinicke, who signed a two-year contract extension and got his shot in the first place thanks to his prior affiliation with head coach Ron Rivera in Carolina.

In the unlikely event someone from that trio emerges as a viable starter in 2021, let’s look at five of the next-best replacement options for Washington to better complement its exceptional defense.

Washington Football Team quarterback: Who will be under center in 2021?

All the momentum is on Lance’s side after his buzz-worthy performance at North Dakota State’s pro day. The dual-threat prodigy is only 20 years old, yet has already demonstrated an understanding of NFL concepts, has an absolute cannon for a right arm and boasts a thickly-built, 6-foot-4 frame.

With such incredible physical tools to work with, the major concern for Lance is the fact that he was only a one-year starter at the FCS level. The Bison were way more talented than most of their opponents, and Lance led them to a national championship with relative ease in 2019.

That’s not to take away from all the positives Lance brings to the gridiron, though. He threw for 28 touchdowns and zero interceptions that year and ran for another 1,100 yards. Taking such care of the ball and still being so dynamic as a downfield thrower and rusher makes Lance a unique prospect.

Some may argue he needs a full season to sit and learn behind a veteran. Such a formula worked for, say, Patrick Mahomes. Not to suggest Lance is going to end up with a Mahomes-esque start to his NFL career, yet he has some of similar physical traits to the Kansas City Chiefs superstar.

Washington may succumb to pressure to play Lance right away. If that’s the case, he can learn on the job with a top-flight defense complementing him, and if the Football Team spends some of their plethora of cap money on another good receiver to pair with Terry McLaurin, things could really look great in Washington very soon.

Given the relatively deep crop of first-round QB prospects, there’s a chance the Football Team wouldn’t have to mortgage their future to move up in the draft to acquire Lance. His skill set and youth give him perhaps the highest ceiling of anyone in the 2021 class.

The New Orleans Saints got up-close and personal looks at Jameis Winston even before he landed with them. He was the first overall pick of the Tampa Bay Buccaneers, and squared off against the Saints twice per year from 2015 through 2019.

Sean Payton doesn’t just bring in anyone to learn an offense tailored to one of the most cerebral, legendary quarterbacks of all-time, Drew Brees. After all those times facing Winston, New Orleans’ head coach signed off on getting Winston, and he served as a backup this past season.

Now that Winston has had some time to cool down, and is look as fit as he ever has in his career, maybe he’s ready to start again under another ex-NFC South coach, Ron Rivera.

Yes, Winston threw 30 interceptions the last time he was a full-time starter. Yours truly isn’t a massive fan of his with this fact as context, either. Bear in mind, though, that was before Winston underwent eye surgery that greatly improved his vision.

Another detail most forget about when discussing Winston’s historically turnover-prone 2019 campaign: He was the NFL passing champion that year.

The inconsistency is maddening, yet between the corrected vision, the learning under Payton and Brees with the Saints and having to sit on the sidelines for a whole season give or take, you can bet Winston is ready to make the most of his true second chance.

New Orleans has too many cap difficulties to legitimately appeal to Winston when he could start somewhere like Washington. It’s a playoff-caliber team with the best opportunity to step in and start. How could Winston turn that down, not to mention the significant upgrade in pay the Football Team could offer him?

The New York Jets really did cost themselves Trevor Lawrence and the top selection in the 2021 NFL Draft with their two meaningless wins late in the season, but they’re still in position to make a change under center with the second overall pick.

If New York general manager Joe Douglas believes either Zach Wilson or Justin Fields is an upgrade over Sam Darnold, he may take one of them and ship the Jets’ current signal-caller away.

Darnold needs some type of support system to thrive. He hasn’t gotten it in the Big Apple. He was with a head coach in Adam Gase who actually hindered his development rather than helped it, which resulted in Gase getting fired.

Turnover problems that plagued Darnold at USC have followed him to the pros, and part of it is a product of pressing too much on a bad team.

Provided the Football Team supplements the receiving corps with additional weaponry to join McLaurin, there’s enough for Darnold to work with. He’d have the support of a stout defense and a rushing attack spearheaded by Antonio Gibson to make his job easier.

Lack of continuity marred Marcus Mariota‘s tenure with the Tennessee Titans. Eventually, the former No. 2 overall pick found himself ahead of a transcendent player in Ryan Tannehill, whose change of scenery from Miami resulted in elite-level production at the quarterback position when he replaced Mariota. Tannehill has guided Tennessee to consecutive playoff berths and a spot in last postseason’s AFC title game.

Something similar could be in store for Mariota’s second act. This wouldn’t really be considered a possibility a couple weeks ago. However, Mariota filled in for an injured Derek Carr on Thursday Night Football and played extremely well for the most part.

What was more impressive than Mariota’s chemistry with the Raiders receivers despite limited practice reps was his rushing ability, which Las Vegas head coach and play-caller Jon Gruden took full advantage of in Week 15 to the tune of 88 yards on nine carries and a touchdown.

After going through five offensive coordinators in his first five NFL seasons, Mariota has shown he can run Gruden’s complex system. Put him in Washington, let him use his legs to open up the running game and play-action passes, and watch Mariota work his magic in a career resurgence for the Football Team.

This is the option Washington should go with if the idea is to let Heinicke truly compete for the starting job in 2021. However, Gardner Minshew could still prove to be an upgrade over the only incumbent on the depth chart.

The Jacksonville Jaguars are going to draft Clemson’s Trevor Lawrence first overall in all likelihood, meaning Minshew becomes expendable. Teams can acquire him for cents on the dollar, as he’s still on his cheap rookie contract for two more seasons. This makes Minshew the most underrated trade chip in the NFL.

Beyond the obvious bang for the buck, once upon a time there was something called Minshew Mania in Jacksonville. Taking over unexpectedly as a rookie for injured Super Bowl MVP Nick Foles, Minshew played extremely well in a tough spot with the deck stacked against him, as PFF highlighted here:

Ever since, the Jags have sabotaged any efforts Minshew has made to establish himself as a viable answer at the position, and an injury prevented him from starting more than nine games in 2020 on a team clearly trying to “Tank for Trevor.”

Minshew has the legs to extend plays, can make quick decisions and get through progressions swiftly and has thrown 37 touchdowns to just 11 interceptions with a 93.1 passer rating in 23 career games to date. That’s better than whatever Smith or Allen are probably going to offer, unless the former proves to be healthy and gets his physical skills back to par.