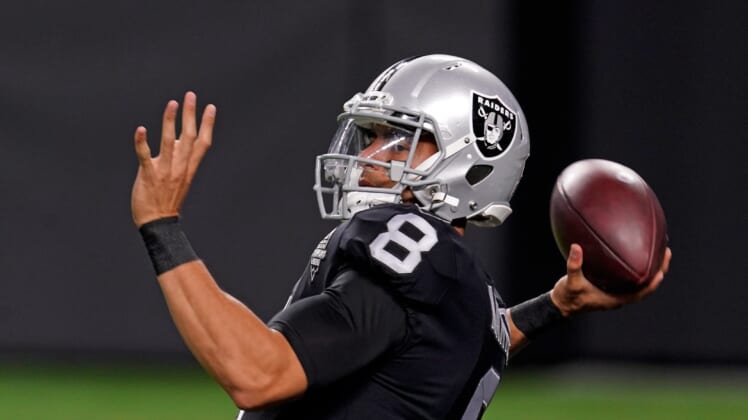 The Washington Football Team made the playoffs this past season carried by their dominant defense. As Ron Rivera and Co. begin their search for pieces to help this team reach the next level in 2021, they may already have their eyes on a quarterback.

Washington already signed Taylor Heinicke, rewarding the backup quarterback who delivered a surprising effort in his playoff start. While he will be allowed to compete for the job next season and Rivera would love to bring back Alex Smith, this organization knows that finding a better passer is crucial for this team to take a more significant step forward next season.

There has already been one blockbuster quarterback trade this offseason, with Matthew Stafford and Jared Goff swapping teams. Meanwhile, Deshaun Watson, Carson Wentz and Sam Darnold could all be moved in a wild quarterback carousel. As of now, however, it seems Washington has its sights set on a different passer.

On Friday, NFL reporter Michael Lombardi told VSiN that the Washington Football Team is “extremely interested” in Las Vegas Raiders quarterback Marcus Mariota. With Jon Gruden shopping him around the league, he could be the ideal traded candidate for Washington.

Mariota signed a two-year, $17.6 million contract with the Raiders last offseason. Some thought he might compete with Derek Carr for the starting gig, but it quickly became evident that he would serve as the backup. The 27-year-old started the season on injured reserve after suffering a pectoral strain, but took the field for one game in 2020.

When Carr suffered a groin injury in Week 15 against the Los Angeles Chargers, Mariota took over the game. He impressed off the bench, racking up 226 passing yards, 88 rushing yards and two total touchdowns. He proved that he is still one of the better athletes at his position with his incredible touchdown run.

Owed $11.35 million next season, not including reachable incentives, Mariota’s salary is reasonable for a starting quarterback. Teams will certainly have concerns about how poorly he played in his final season with the Tennessee Titans, but there is also undeniable talent.

The No. 2 overall pick in the 2015 NFL Draft, Mariota is a former Heisman Trophy winner and he made the Pro Bowl in 2016. He broke out in his second season with the Titans, posting a 26-9 TD-INT ratio with a 95.6 quarterback rating. Unfortunately, everything came apart after that. Over his last three seasons in Tennessee, he had a 31-25 TD-INT ratio and an 86.0 quarterback rating.

It would be much cheaper to acquire Mariota than Watson, Wentz or Darnold. By landing a more affordable quarterback, with Washington keeping its top picks, the front office could then spend its 2021 NFL Draft picks on offensive linemen and defensive backs.