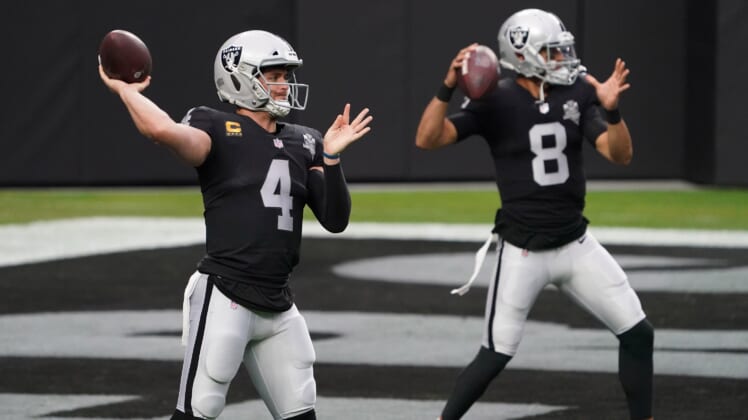 It could be a smokescreen on the part of the Las Vegas Raiders. Backup quarterback Marcus Mariota suddenly finding himself on the trade block after rumors suggested starter Derek Carr could be moved.

The Carr suggestion came amid a related report indicating that Las Vegas could have interest in Houston Texans quarterback Deshaun Watson. If that were to come to fruition, both Carr and Mariota would be moved.

Looking at the Mariota angle for a second, the New England Patriots were bandied about as a potential landing spot for the former No. 2 pick. Apparently, they are not the only team interested in Mr. Mariota.

NFL Media’s Ian Rapoport reported the news on Tuesday, indicating there’s “legitimate and real” interest from other teams in a potential Mariota trade.

Contractually, it would make sense for a team to take on Mariota. He’s set to earn a base salary of $10.63 million in 2021. That’s top-end backup money. If the former Oregon star can somehow find a way to turn around his career, he could be a cost-effective option for a contending team.

Mariota, 27, signed a two-year, $17.6 million deal with Las Vegas last spring. He looked pretty good in extremely limited playing time behind Carr. However, that has not been the case in recent seasons.

The former No. 2 pick last acted the part of a starter-caliber quarterback back in 2016. That’s not hyperbole. There’s a reason the Tennessee Titans benched him for Ryan Tannehill back in 2019 before moving on from the quarterback shortly thereafter. His regression has been eye-opening.

All said, Mariota has started a combined 34 games over the past four seasons. With that said, there’s still some upside if he were to land in the right situation.

We previously focused on the Patriots as a potential landing spot. Following Cam Newton’s disastrous one-year tenure, Bill Belichick and Co. are going to be looking for a replacement. They will likely do so on the cheap. That’s where Mariota could potentially come into play.

The Washington Football Team, Chicago Bears, Carolina Panthers, New Orleans Saints and San Francisco 49ers are all looking for an upgrade at quarterback in the NFC. Meanwhile, the Raiders’ AFC rivals could show interest. In addition to the Patriots, that includes the Houston Texans, Indianapolis Colts and New York Jets.

Any move to acquire Marcus Mariota in a trade likely wouldn’t cost a team much in terms of draft pick compensation. That’s especially true given the number of quarterbacks currently on the trade block, most of whom offer more than Mariota.

Even then, his team-friendly contract makes the veteran an interesting option moving forward.