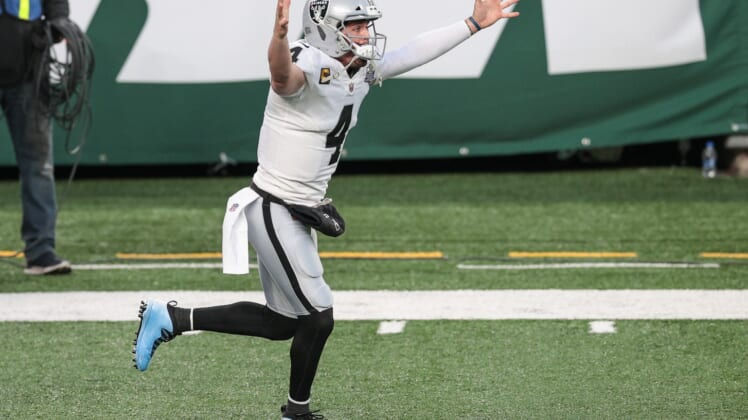 It’s definitely silly time during this point in the NFL offseason. With that said, a recent report suggesting that Las Vegas Raiders quarterback Derek Carr is a hot commodity in trade talks might take the cake.

We already know that there’s been a contentious relationship between Carr and Raiders head coach Jon Gruden. It led to speculation about a potential trade during the 2020 NFL Scouting Combine last winter.

Now that the 29-year-old Carr is coming off a pretty solid 2020 season, suggestions from Las Vegas were that he would be back with the Raiders next season. Not so fast.

Derek Carr is a hot commodity on trade market

“Derek Carr’s outstanding season has made him a sought-after commodity for teams in need of a quarterback and could open the door for the Raiders to pursue Houston Texans quarterback Deshaun Watson,” Vincent Bonsignore of the Las Vegas Review-Journal reported on Tuesday.

The Raiders’ insider went on to report that multiple teams will pursue Carr during the offseason. Meanwhile, there’s that entire Deshaun Watson thing. If Las Vegas is able to move off Carr, and depending on what it could get back, the disgruntled Houston Texans star could be an option for the Raiders.

Despite his divisive relationship with Gruden, the stats tell us a promising story. A three-time Pro Bowler, Carr has put up 170 touchdowns against a mere 71 interceptions during his seven-year NFL career. Secondly, he’s tossed for over 4,000 yards in each of the past three seasons.

There’s certainly issues here when it comes to throwing the ball down the field. However, the Raiders have also lacked receivers to stretch the field in recent seasons.

Carr signed a five-year, $125 million extension with the Raiders back in 2017. While that seemed to be a very lucrative contract, it’s important to note that he’s slated to count just $22.13 million against the cap next season. That’s good enough for 15th among quarterbacks in the NFL.

This could be among the reasons other teams are showing interest in a Carr trade. That’s especially true given the revenue downturn created by the COVID-19 pandemic, which will impact the 2021 NFL salary cap. Add in his performance over the past several seasons, and it’s now not necessarily a surprise teams would be interested in the Fresno State product.

All of this comes as rumors heat up regarding a potential Deshaun Watson trade from the Texans. While Houston’s brass has gone on record indicating that it will not trade the reigning passing champion, Watson wants out of dodge. Even if the Texans push back against that idea, it stands to reason he will eventually be moved.

That’s obviously where the Raiders come into play. If they are able to move off Carr for some draft pick compensation, trading for Watson could be logical. Remember, Gruden made a play for Tom Brady last offseason. He’s always attempting to pull off that franchise-altering, blockbuster move.

As we have noted multiple times, any trade for Watson could cost one of the largest bounties in modern league history. A recent report suggests that the Texans are looking for three first-round picks and either a quarterback or two legit young defensive players.

Whether Las Vegas has the players to offer up remains to be seen. However, the team could use its first-round picks the next three years and whatever it acquires in a hypothetical Derek Carr trade to entice the Texans.

Either way, this is a nice new wrinkle during an early-portion of the offseason that has seen NFL rumors fly at a near never-ending pace.