Can the Houston Texans afford to have new general manager Nick Caserio being this naive about a prospective Deshaun Watson trade? 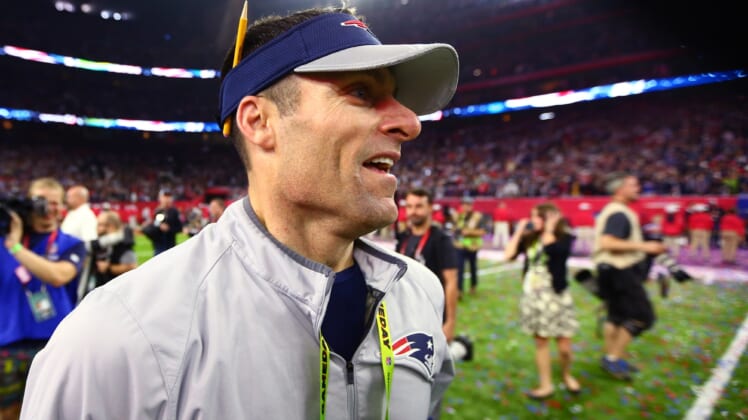 The Houston Texans introduced their new head coach David Culley on Friday, and general manager Nick Caserio did his best to put out the rapid-fire speculation about a Deshaun Watson trade.

Caserio reaffirmed the Texans’ commitment to building a winner around the superstar quarterback, and implied Houston wasn’t even considering dealing him away.

Despite the fact that Watson demanded a trade weeks ago, ESPN’s Adam Schefter tweeted out what Caserio had to say regarding the QB’s future in Houston:

Caserio is new to the job and understandably wants to make a strong, positive impression on the Texans fanbase. After all, he comes from a New England Patriots organization that enjoyed long-term success with Tom Brady at quarterback for two decades.

But based on how burned the bridge seems to be between Watson and the organization’s leadership, keeping the 25-year-old in Houston for the long haul doesn’t seem feasible.

Houston Texans GM Nick Caserio already in over his head

We’ve seen this movie before, haven’t we?

Somebody comes out of New England and thinks they know best, when really it’s Bill Belichick masterminding the whole, one-of-a-kind operation in Foxborough. More often than not, anyone who tries to adopt the “Patriot Way” elsewhere gets burned. Just ask fired Texans coach/disastrous general manager Bill O’Brien. Or the New England tandem that flopped in Detroit with coach Matt Patricia and GM Bob Quinn.

Caserio is in complete denial about Watson getting traded. In reality, he’s been handed a golden ticket to rebuild the roster and culture as he sees fit.

What good is it going to do to keep a disgruntled quarterback around who’s supposed to be the face of the franchise? Watson is among the greatest quarterbacks in the league, and retaining him is understandably something any smart executive would want to do.

That said, all indications are, it’s past the point of repairing the relationship. Sure, Caserio and the Texans can play hardball and fine Watson for no-showing if he chooses to utilize his leverage that way. Heck, maybe he’ll go super rogue and sit out the 2021 season. Nothing good would come of that for either side, though. Watson’s trade value would diminish, and Houston couldn’t rebuild like it’d want to.

Look at what else Schefter has recently reported. If this is merely what’s suitable for public consumption, imagine how bad it must be behind the scenes.

Strike while the iron’s hot, Mr. Caserio. Watson just led the NFL in passing yards in 2020, and his value can’t possibly be higher right now. The Texans are in salary cap hell at about $16 million in the red. Their roster is among the worst in the NFL, and the way to rectifying the situation is creating cap room, amassing numerous high draft picks and finding a new franchise quarterback in the draft.

Caserio was a longtime personnel man in New England. How’s the Patriots’ draft record been lately, anyway? Not great.

It’d be useful to have a can’t-miss player who’d actually want to be in Houston and be built around. That’s precisely what Caserio could have by trading Watson.

If the New York Jets emerge as the trade partner Caserio does business with, he could net a king’s ransom of draft picks, potentially an established veteran player and select BYU’s Zach Wilson No. 2 overall in the 2021 NFL Draft. Maybe the Texans wouldn’t be Wilson’s choice destination, yet he’d have the chance to save a franchise, which is what special players near the top of the draft are supposed to do.

The longer Caserio lives in this fantasy world where Watson and the Texans coexist in perfect harmony, the more damaging the outlook will be for the franchise’s near and long-term future.