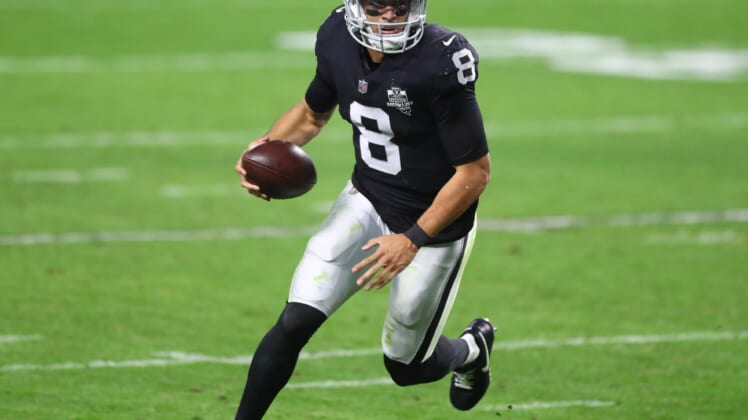 When Las Vegas Raiders starting quarterback Derek Carr went down with a groin injury in the second quarter of Thursday’s game, it afforded backup Marcus Mariota an ability to see action for the first time since he was a member of the Tennessee Titans last season.

The backdrop here was real. Taking on the last-place Los Angeles Chargers, Marcus Mariota and his Raiders were in must-win mode at 7-6 on the season and one game out of the final AFC Playoff spot.

Mariota showed flashes of brilliance early on in keeping this game close while the Raiders’ poor defense continued to struggle. That included a touchdown strike to star tight end Darren Waller in the second quarter.

With his Raiders down 24-17 and just over six minutes remaining in the final stanza, Marcus Mariota topped himself.

As noted, this reminded us very much of what we saw from Mariota during his days at Oregon. It’s what led him to being the No. 2 overall pick of the Titans back in 2015 before washing out. Talk about going all in to tie the game.

What makes this even more amazing is the injuries Marcus Mariota has dealt with throughout his NFL career. None of that seemed to be a concern as he tied it up for the Raiders with their season on the line. This is the type of effort an old-school head coach in Jon Gruden values. That’s for sure.

Regardless of what happens moving forward, we could very well be looking at a quarterback controversy between Marcus Mariota and Derek Carr over the final couple weeks of the season. The former came to play big time Thursday evening in Las Vegas.

Click below for more Las Vegas Raiders news and rumors