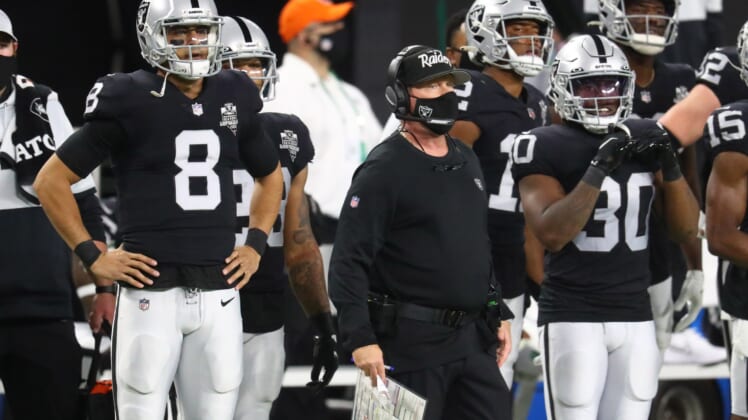 The NFL quarterback carousel is in full swing this offseason, and amid rumors that Las Vegas Raiders signal-caller Marcus Mariota is the subject of trade interest, it’s worth examining which teams he’d be ideally suited for in a potential deal.

Mariota is currently the clear backup to Derek Carr, so with only one year left on his contract and a modest salary cap hit, teams in need at the position could do far worse than taking at least a one-year flier on the former No. 2 overall draft pick.

Let’s take a look at where Mariota seems like he’d fit in best, ranking his destinations based on personnel and organizational makeup and whether or not the Raiders would trade with said teams.

In our deep-dive look at the 2021 NFL offseason QB carousel, San Francisco stood out as a great spot for Mariota to land.

Not only is there a deeply rooted history and mutual respect between Raiders head coach Jon Gruden and the 49ers’ Kyle Shanahan, but because of that relationship, there’s a lot of concepts that translate over from the system Mariota runs right now to what he’d operate in the Bay Area.

The Niners have 43 pending free agents and don’t seem all that sold on Jimmy Garoppolo as the quarterback of the future since he can’t seem to stay healthy. Mariota needs at least a little bit of continuity in terms of scheme, because he saw his career spiral away from him in Tennessee due to a constant turnover in play-callers.

Shanahan isn’t going anywhere. He’s an absolutely brilliant offensive mind, and if the price were right in a trade, the Raiders might as well get what they can for Mariota while also trading him out of conference. It’d be appealing for Shanahan to have an athlete like Mariota add a new dimension to his offense, and it’d be much different than what he once ran in Washington with Robert Griffin III, because Mariota is far more proficient as a traditional pocket passer.

This way, the 49ers don’t have to rely on a rookie quarterback to carry the weight of playoff expectations. They’d be able to count on Mariota to step in and provide quality play right away.

During limited 2020 action, Mariota came off the bench in relief of Carr and nearly guided Las Vegas to a victory over the Los Angeles Chargers, falling short in overtime 30-27. After showing off his full dual-threat arsenal and mastery of Gruden’s complex system, there was renewed belief Mariota could indeed shine if he ever got a second chance as a long-term NFL starter. The 49ers are the perfect spot for Mariota to maximize his potential.

The Football Team just signed playoff phenom Taylor Heinicke to a new two-year contract, but they’re hardly settled at the quarterback position otherwise. While they do have salary cap space to chase a pricier veteran in free agency, or could move up from 19th overall in the 2021 NFL Draft to take one of the top prospects at the position, Mariota isn’t at all a bad alternative.

Heinicke obviously didn’t back down in the postseason and played surprisingly well against the eventual Super Bowl LV champion Tampa Bay Buccaneers in a 31-23 loss. With a similar football acumen, superior arm talent and better athleticism, it stands to reason Mariota could be even more dynamic for Washington at the controls of its offense.

Again, Mariota isn’t an expensive player, with a cap hit of only $11.35 million in 2021, which is small fare for a potential starting quarterback.

Thanks to a top-flight defense, Washington just won the NFC East with some of the worst QB play in the NFL this past season. Alex Smith’s comeback story was nothing short of awe-inspiring, yet he had obvious physical limitations and eventually got banged-up to the point where he couldn’t start in the playoffs, ceding the offensive reins to Heinicke.

Oh, and 2019 first-round pick Dwayne Haskins flamed out in the nation’s capital, proving he wasn’t ready to be the face of the franchise.

Mariota has always been touted for his maturity, and handled getting benched for a resurgent Ryan Tannehill in Tennessee with uncommon grace.

Wide receiver Terry McLaurin is a legit no. 1 option for Mariota to throw to, as he’s produced exceptionally well given how underwhelming the Football Team’s QB situation has been of late. With Antonio Gibson and J.D. McKissic as viable pass-catchers out of the backfield and tight end Logan Thomas emerging as a viable playmaker, Washington has a strong enough supporting cast and could even improve it with another established star if Mariota and his modest salary are on the books.

3. Marcus Mariota to the Indianapolis Colts

Consider that Colts head coach and play-caller Frank Reich once made Carson Wentz look like an MVP-caliber quarterback in Philadelphia. Imagine what he could do with someone like Mariota, who seems a lot more equipped and mature to be a starting signal-caller than Wentz does at this point.

Thanks to Quenton Nelson and several other strong players, Indianapolis has a great offensive line, with a pair of unique weapons at tailback in receiving specialist Nyheim Hines and explosive runner Jonathan Taylor.

Parris Campbell will return to the Colts receiving corps in 2021 to join rising second-year stud Michael Pittman Jr., and the Colts also have the third-most cap room in the entire NFL. Not bad for a team that went 10-6 and just made the playoffs, coming within a couple plays and three points of beating the Buffalo Bills in the Wild Card Round.

Due to Philip Rivers’ retirement, Indy is in the quarterback market this offseason, but similar to Washington, is far back in the draft to the point where trading up for a top prospect gets really expensive.

Instead of splurging a good chunk of the cap on a Wentz trade, hoping his shared Eagles history with Reich sparks a career renaissance, maybe a better locker room and team chemistry fit is Mariota, who’s never made waves about riding the pine behind Tannehill or Carr.

How awesome would it be, too, to see Mariota return to the AFC South and potentially guide Indianapolis to a division title, beating out the Titans in the process? That would quickly emerge as one of the NFL offseason’s most fascinating subplots.

Read More: Indianapolis Colts rumors: Carson Wentz could be option for team in 2021

4. Marcus Mariota to the Chicago Bears

One way Bears general manager Ryan Pace and head coach Matt Nagy can ingratiate themselves with frustrated Chicago fans is by not making a desperate quarterback move. Obviously, trading up to draft Mitch Trubisky over Patrick Mahomes and Deshaun Watson was a big swing and a miss by Pace. The acquisition of a former Super Bowl MVP in Nick Foles wasn’t a great move, either.

The Windy City will swirl with fury if either Trubisky or Foles is the starter at the dawn of the 2021 campaign for the Bears. So, Mariota serves as a happy medium. At worst, he’s a stopgap option who doesn’t kill the cap, probably won’t cost Chicago its first-round pick in 2021 and brings a unique element to the offense that was missing with a see-it thrower in Trubisky and a statuesque passer in Foles.

Pros for Mariota and the Raiders about the prospect of sending him to the Bears: It’s another out-of-conference suitor for Las Vegas, and for the field general, it’s a legitimate chance to start for a team that fields an excellent defense, ironically led by a former Raiders superstar in Khalil Mack. The fact that these teams have done business before on a major trade — albeit, not during current Las Vegas GM Mike Mayock’s tenure — bodes well for a deal getting done.

What hurts Chicago’s case to acquire Mariota is that he may instead want to either seek out a superior situation, or remain with the Raiders for another year over going to a situation where there’s been a fair amount of dysfunction. Star Bears receiver Allen Robinson is almost certain not to return in 2021, and there aren’t any other excellent weapons in the receiving corps to speak of as of now.

Speaking of clear-cut chances to start next season, New England would definitely provide that. Mariota seems to have the type of personality that assimilates really well with the “Patriot Way” carried out for many years under legendary coach Bill Belichick.

The rich, winning tradition in Foxborough is a strong draw for Mariota. It’s a matter of whether or not the Raiders would want to make a deal with the arguably GOAT of coaches, only to watch Mariota flourish in New England and ultimately lead the Pats to be a superior team in the AFC.

Recent rumors and speculation are already linking New England to Mariota, which does make sense given that the Patriots just worked with a similarly athletic QB in Cam Newton during the 2020 campaign and experienced spurts of success with him.

However, Newton did only post a 7-8 record as a starter and suffered from one of the worst casts of skill players around him in the entire league. Mariota doesn’t seem like the type of transcendent player who could elevate unheralded receivers into Pro Bowl-caliber contributors like Tom Brady used to routinely do.

A bigger question is whether offensive coordinator Josh McDaniels can make the necessary adjustments to his system in the post-Brady era and break in a quarterback who isn’t a scheme-transcendent player but has plenty of talent, such as Mariota.

It’s not a great fit on paper, but after enduring a learning curve with Newton leading the offense last season, perhaps McDaniels, Belichick and the Patriots organization could talk themselves into giving Mariota a trial run. He’s certainly better than any option New England currently has on the roster.