Patriots rumors: Marcus Mariota could be one of New England’s trade targets

Patriots rumors suggest that Marcus Mariota could be a trade target for New England. Plus, a look at Carson Wentz's fit with the team and what they are asking. 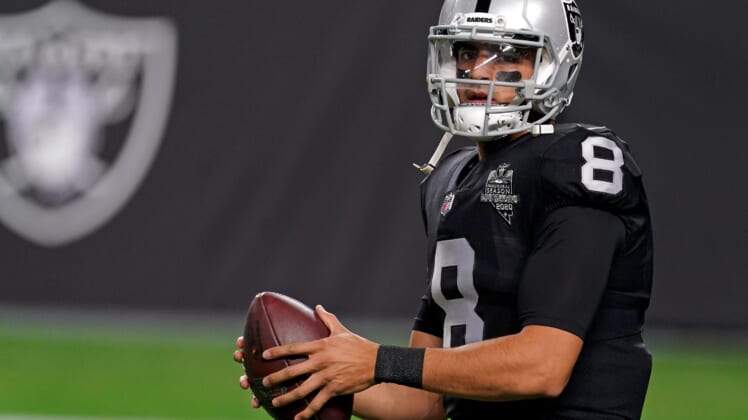 The New England Patriots are in search of a quarterback for the 2021 season as they look to climb their way back into the playoffs. The team was linked to Matthew Stafford, but Patriots rumors state they only offered a second-round pick and an unknown player for someone who didn’t want to be there anyway.

The price to trade for a quarterback has been extremely high this season. Stafford, who netted quarterback Jared Goff, two first-round picks, and a third-round pick, is the price the Philadelphia Eagles have been looking to acquire in a deal for their young quarterback Carson Wentz.

According to The MMQB’s Albert Breer, the New England Patriots are checking in on “everything” when it pertains to acquiring a quarterback this offseason. However, Breer pointed out that Marcus Mariota is “probably what we are looking at” when it comes to the Patriots.

Marcus Mariota has been at the subject of Patriots rumors dating back to the 2020 offseason. Mariota, 27, signed with the Las Vegas Raiders and played in one game when Derek Carr left with a groin injury. Mariota threw for 226 yards last season, along with one touchdown and interception.

The Raiders recently signed another one of their backup quarterbacks to a contract extension, so it could open the door for the team to trade Mariota. Las Vegas has already been rumored to be exploring an avenue where they acquire Houston Texans quarterback Deshaun Watson, so the former No. 2 overall draft pick out of Oregon may not be in their plans.

Albert Breer echoed these thoughts on a podcast the other night by saying, “Honestly, (Mariota) is probably what we’re looking at.” Patriots rumors have also suggested the team could look at another mid-tier quarterback like Mariota in free agency.

Mariota could most likely be acquired for a third-round pick and help Las Vegas by clearing $10 million in salary. The Patriots have just under $60 million in cap space, so they could easily fit Mariota in and still sign around two good free-agents.

It would be a win-win scenario for everyone involved. The Patriots could take a Ryan Tannehill type of reclamation project, just as they did with Newton this past offseason, and the Raiders could clear some cap space and net a third-round pick for someone who won’t even be a starter next season.

There are other trade options for the Patriots this offseason and they could even make the decision that Cam Newton surrounded by more weapons is a good option. Whatever New England decides to do, they should be in a good spot going into the season with an abundance of cap space and a high draft pick.

Carson Wentz’s issues with Doug Pederson have been well documented when it comes to how he likes to be coached and how he reacts. It is exactly why Patriots rumors suggest that Wentz being traded there could be an unlikely scenario for all parties involved.

Albert Breer said that the Patriots may believe they can “fix Carson Wentz” and how he plays the position, but his personality would not fit in with the organization due to him not liking to be coached hard. If a player wants to be in New England, they certainly have to enjoy being pushed by the likes of head coach Bill Belichick and offensive coordinator Josh McDaniels.

There are many things to like about Wentz, but after he tore his ACL in 2017, it’s been pretty downhill since that moment. The Patriots would probably like Wentz if they can trade a similar package they offered for Stafford to the Eagles. The package that Philadelphia wanted before is simply unreasonable.

But as Breer said, “Foxboro’s probably not the place for you” when it comes to Wentz possibly becoming a New England Patriot.