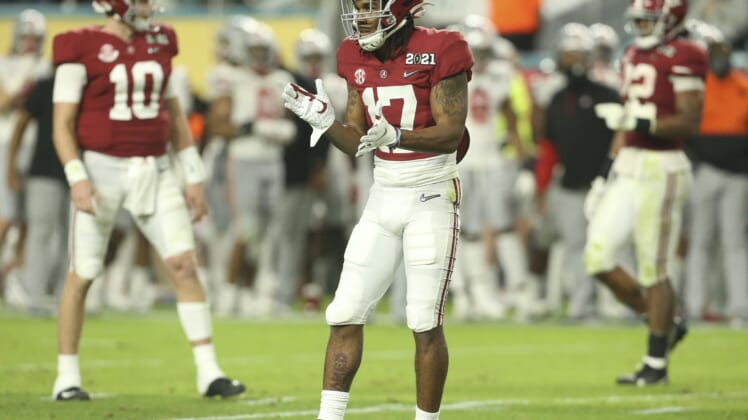 To say that the New England Patriots draft picks this coming April will need to be immediate producers would be an understatement.

Bill Belichick and Co. are coming off their first non-playoff season since 2008. New England will not be returning struggling quarterback Cam Newton. The team also lacks the necessary skill-position talent to be successful in the modern NFL.

Obviously, the major backdrop here will be the quarterback position. Is New England going to pull off a blockbuster trade for a veteran quarterback? Perhaps, the team trades up for either Zach Wilson or Justin Fields. Either way, this is going to be a major off-season story.

In checking in on the Patriots’ 2021 draft, there’s a lot of avenues the team could pursue in the first round and a bit later in the annual draft. That includes a potential generational pass-catcher in Round 1. Let’s check in on New England’s options below.

We already know how much success Rob Gronkowski had under Josh McDaniels with the Patriots. Imagine just how good a more athletic Pitts would be in New England. The 6-foot-6 tight end finished in the top-10 of Heisman voting this past season, recording 43 receptions for 770 yards and 12 touchdowns in a mere eight games for the Gators. He’d be an immediate impact producer for a Pats team that lacks skill-position talent.

As for Waddle, this specific mock draft simulator from Pro Football Network, had the smallish 5-foot-10 receiver on the board at 15. While that’s an open question, Bill Belichick would almost run to the podium to get this electric slot guy on the team. Waddle boasts game-breaking ability and would be a huge asset, no matter who is under center in New England next season.

There’s also a chance that New England goes with a more conventional pick and finds a franchise left tackle. Slater could be that guy out of the gate. It’s no small thing given that Marcus Cannon opted out of the 2020 season. Realistically, however, a trade up for Zach Wilson (BYU) or Justin Fields (Ohio State) could make the most sense for New England should Belichick look long-term.

This is a prime opportunity for the Patriots to pull off a trade for a veteran quarterback. They are not getting either Deshaun Watson or Aaron Rodgers without yielding multiple first-round picks. However, a package including their second-round selection could make sense for Matthew Stafford.

New England could also wait it out and see if Heisman finalist Mac Jones is on the board. He’s not seen as a top-end quarterback prospect despite putting up 41 passing touchdowns against four interceptions for the eventual national champion Crimson Tide. Under this scenario, the Patriots would add a veteran quarterback in free agency while letting Jones sit for a year or two.

Obviously, wide receiver is another early-round option for the Patriots. Former first-round pick N’Keal Harry has not panned out. All-time great Julian Edelman is unlikely to be back with New England in 2021. At 6-foot-3, Marshall would provide an outside threat. Meanwhile, Moore (5-foot-9) is more the traditional slot receiver that the Pats have valued under Belichick in the past.

Without a third-round selection, there’s a chance New England opts to move down in Round 2 and add more draft capital. If not, Hubbard should be the target here. The stud running back finished in the top-10 in Heisman voting back in 2019 before regressing with the Cowboys this past season. Even then, Hubbard put up nearly 4,000 total yards in three seasons with Oklahoma State. He’d certainly be an upgrade over the struggling Sony Michel.

If New England were to add a veteran quarterback via free agency or a trade, a mid-round signal caller becomes a real option. That’s where the underrated Mond comes into play. The 6-foot-3 quarterback was tremendous during his four-year stint at College Station, tallying 93 total touchdowns against 23 interceptions. He’d be a project to learn behind a veteran for a couple years. Think Jacoby Brissett and Jimmy Garoppolo.

Read More: NFL trades: 5 blockbusters that could shake up 2021 offseason

It stands to reason that Belichick will be seeking out a veteran quarterback via a trade. He’s the second-oldest head coach in the NFL and is not going to want to start anew with a young signal caller.

Short of New England pulling off a blockbuster for Deshaun Watson or Aaron Rodgers, the 32-year-old Stafford makes the most sense. He’d come cheaper than the other two and is still a top-10 statistical quarterback in the NFL. Offering up two second-round picks could potentially get it done.

As for the remainder of the Patriots’ draft, the goal has to be to build up one of the weakest skill-position groups in the NFL. Stafford teaming up with Kyle Pitts would be all sorts of fun. Meanwhile, Hubbard could be a Day 1 starter for the Patriots.

Think about it this way. Stafford, Hubbard and Pitts would be an upgrade over Newton, Michel and Edelman. It’s not close. And it would give New England some youthful infusion after missing out on the playoffs for the first time since 2008.