The New England Patriots head into this offseason looking for a solution at quarterback. However, here's why Cam Newton may be that solution for 2021. 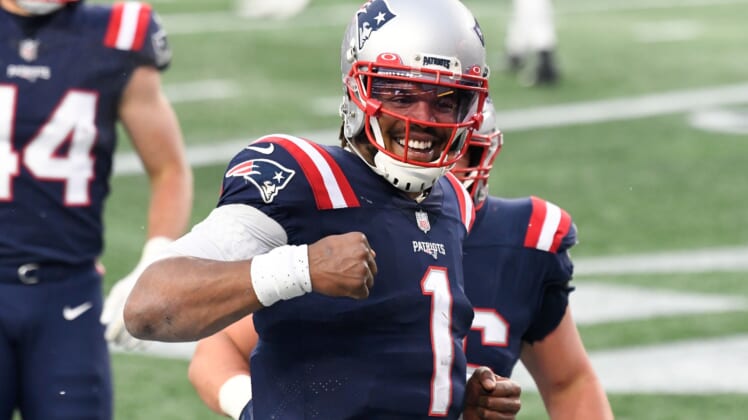 The New England Patriots go into this offseason looking for a quarterback that can bring them back to the playoffs. Cam Newton lead the team to a 7-9 record and the 15th pick in the 2021 NFL Draft, but that may not be good enough for Patriots head coach Bill Belichick.

However, some members of the team, such as free safety Devin McCourty “wouldn’t mind” seeing the former MVP winning quarterback return to the team for the 2021 season. That won’t stop Belichick from looking at other options at quarterback for New England.

There are options such as free agency and the trade market, but here is why Newton might remain the best option for the Patriots at quarterback in 2021.

Cam Newton has massive support from his coaches and teammates

Cam Newton may not have had the best 2020 season, but he still received support from his teammates and head coach Bill Belichick. Newton created nicknames for many of his offensive teammates and was described as fun energy within the locker room.

Newton has been characterized as a leader in the locker room and has talked about his leadership in detail before. There’s a lot to love about Cam Newton the person, but the football player has been the reason why his spot with the Patriots in 2021 is currently in question.

Belichick and Newton even mutually agreed that they wished they had more time together. If they still feel the same way once free agency nears, it wouldn’t be a bad idea to act on those feelings and find a common ground on another one-year contract. This leads to the reason why they didn’t have that time together.

Cam Newton signed with New England Patriots on July 8, 2020, which is late in the offseason compared to when others signed their deals. Newton himself admitted that he regrets missing the offseason. He never truly got enough time to fully understand the system he was getting himself into.

The Patriots system is often a hard one for new players to learn, which is why so many of their in-season acquisitions such as Chad Johnson and Mohamed Sanu weren’t that good. Granted, they are wide receivers and it’s difficult to fully learn the system with limited time, let alone no time by jumping straight into the action.

Newton would undoubtedly be better next season with New England if he was given a full offseason to workout with his wide receivers and new acquisitions. It’s a question of whether Belichick believes he can be enough to bring New England back to the promised land.

The free-agent landscape is poor compared to what previous years have been like. The top quarterbacks in this year’s free agency include Dak Prescott, Jacoby Brissett, Jameis Winston, Mitchell Trubisky, and Ryan Fitzpatrick.

Prescott would be the prize of the offseason and the Cowboys may let him walk if no deal seems imminent before free agency. New England would be one of the teams involved due to their massive amount of cap space.

Maybe the Patriots could look into the trade market as a way to acquire a long-term solution under center. That begs the question, though: For New England, is it worth it to trade assets for a quarterback when you can use those for adding offensive weapons?

While fans of New England may not be in favor of having Cam Newton back after his poor year, it may be a good idea to keep him around for one more year, to see what he can offer with a full offseason to prepare and an upgraded supporting cast. He just might surprise Patriots fans with an amazing 2021 campaign.