Indianapolis Colts rumors: Carson Wentz could be option for team in 2021 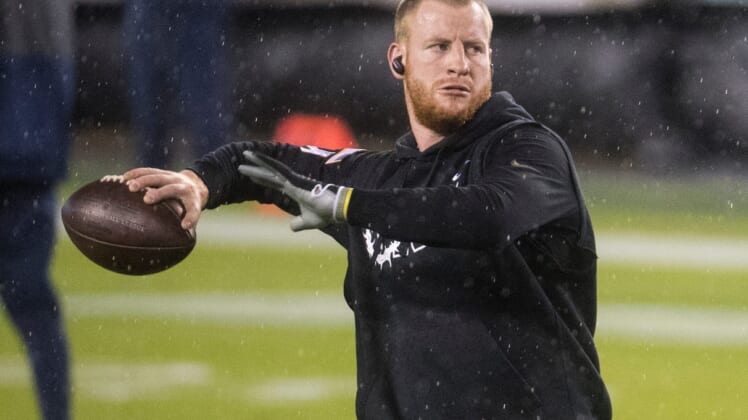 Ever since Luck shocked the NFL world by retiring right before the 2019 season, general manager Chris Ballard and head coach Frank Reich have sought a new quarterback to build the team around. With much of the team’s foundation laid in previous offseasons and the team performing well in 2020, the 2021 offseason could be centered on finding a long-term QB1.

Let’s dive into the latest Indianapolis Colts rumors, which could shape the remainder of the season and the team’s 2021 outlook.

When the Philadelphia Eagles drafted Jalen Hurts with a second-round pick in the 2020 NFL Draft, the organization envisioned developing him and trading him in the future. However, plans changed in 2020 when Carson Wentz suddenly transformed into one of the NFL’s worst quarterbacks.

The Eagles finally benched Wentz in Week 13, sending their franchise quarterback to the bench after 12 games. In those 12 starts, Wentz was sacked a league-high 50 times, throwing a league-leading 15 interceptions and completed just 57.4% of his passes. With the 27-year-old’s confidence rattled and the Eagles facing cap restrictions in 2021, Wentz is now one of the most popular offseason trade candidates.

NBC Sports’ Peter King, one of the NFL’s top reporters, appeared on Pro Football Talk on Friday. During the interview, King highlighted the Colts as a team that makes a lot of sense for a trade and a club that could be interested in Wentz.

Numerous factors would come into play for a potential blockbuster trade. For one, there will likely be quite a few teams that show exploratory interest in Wentz. However, his recent contract extension complicates any deal. If he is traded before the third day of the new league year, March 17, the team acquiring him must pay his $15 guaranteed bonus. He also carries a $34.67 million cap hit in 2021 and that figure is still $31.27 million in 2022.

Wentz has dealt with a lot of pressure in Philadelphia, a city with an earned reputation for how seriously its fans take sports. When Nick Foles won Super Bowl LII, with Wentz injured, it made Foles the hero in the city. Shortly after Foles departed, the Eagles introduced new pressure on Wentz by drafting Hurts.

Things could be different in Indianapolis. Wentz worked with Reich for two seasons, when he served as the team’s offensive coordinator. The Colts also boast a significantly better offensive line, which would allow Wentz to have time to throw and prove he is still a good starting quarterback. Indianapolis could be the perfect opportunity to prove that.

Given the NFL’s declining revenue and a 2021 salary cap that is expected to drop, Philadelphia doesn’t have the financial flexibility to value Wentz like an asset. Instead, the team might have to send draft-pick compensation to another club to offload the contract. If that’s the case, it could be just what the Colts are looking for.

Stay tuned for more Indianapolis Colts rumors in the weeks and months to come. For the latest news regarding the Colts, check out below.