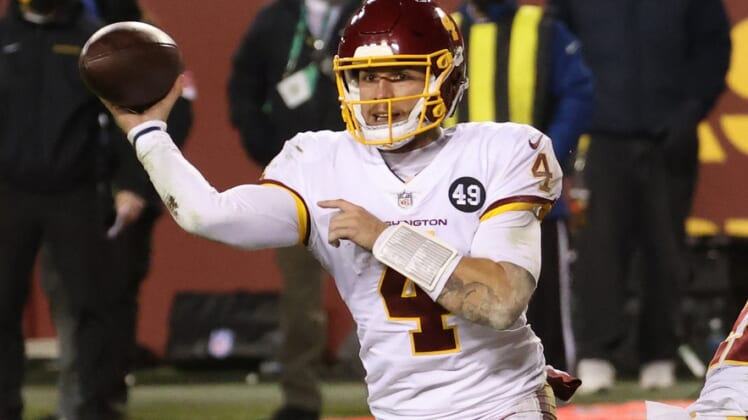 After a strong playoff start against the Tampa Bay Buccaneers, the Washington Football Team has rewarded quarterback Taylor Heinicke with a two-year contract extension.

Heinicke wound up playing some of the best football of the postseason against the eventual Super Bowl LV champions, and that didn’t go unnoticed in the nation’s capital.

Now, Heinicke has secured an improbable, guaranteed roster spot for the foreseeable future — if not a possible starting job.

NFL Network’s Ian Rapoport reported on the big news on Heinicke’s new deal, which is actually a great bargain considering the upside the 27-year-old showed in his postseason debut:

All the credit to Heinicke for earning his contract, which is among the most meteoric rises among unheralded NFL players in recent memory.

Heinicke hadn’t been in the NFL since being released by the Carolina Panthers prior to the 2019 campaign before catching on with Washington this past December, when he signed to the practice squad. In fact, the last team he was a member of was the St. Louis BattleHawks in the XFL.

The football journeyman’s prior ties to ex-Panthers and current Washington head coach Ron Rivera wound up paying off in a big way.

Probably brought in for depth purposes than anything else due to his familiarity with offensive coordinator Scott Turner’s system, Heinicke blew the doors off when he got his sliver of an opportunity. Former first-round pick Dwayne Haskins got abruptly released due to poor performance on the field and bad judgment away from the gridiron, and Alex Smith’s inspiring comeback story got stalled by further injury.

Against the Bucs’ championship defense that just shut down Patrick Mahomes and the Kansas City Chiefs, the gutsy signal-caller didn’t waver, going blow for blow with the GOAT himself Tom Brady in amassing 306 yards on 26-of-44 passing with a touchdown and an interception to go with a team-high 46 yards and a score on six carries.

Even though the Football Team fell short by a score of 31-23 to Tampa Bay on Super Wild Card Weekend, there’s no denying Heinicke proved something. The stage wasn’t at all too big for him.

Don’t mistake the seemingly modest investment in Heinicke as a sign that he can’t earn Washington’s starting quarterback gig in 2021. If anything, he has the inside track.

With Haskins out of the picture in Pittsburgh and Smith’s NFL future uncertain as he contemplates retirement, there aren’t really any other options at the Football Team’s disposal right now. Short of bringing back another former Panthers QB in Kyle Allen, it looks like Rivera and the Football Team are open to the idea of seeing how far Heinicke can take them next season.

On the other hand, the sample size on Heinicke is extremely small, and it’s not the most viable strategy to just hand him the keys and expect him to hold up over the course of a 16-game season.

Heinicke has only attempted 77 regular-season passes in his brief NFL career, but if he plays at the level he did versus the Buccaneers, actually gets starter’s practice reps and gets an additional weapon or two in the passing attack, it’s easy to see how he could put together a strong 2021 campaign.

At the very least, Heinicke is a capable backup who’s proven he can spot start under extraordinary circumstances. With the 19th pick in the 2021 NFL Draft, the Football Team would need to trade up in order to land one of the top quarterback prospects. They may be better off rolling with Heinicke and using their considerable cap space (projected $32.77 million) as a means of pursuing a proven veteran either via trade or free agency.