Could Dwayne Haskins get a second chance in the NFL with the Pittsburgh Steelers? He'll reportedly have a shot to make a good impression. 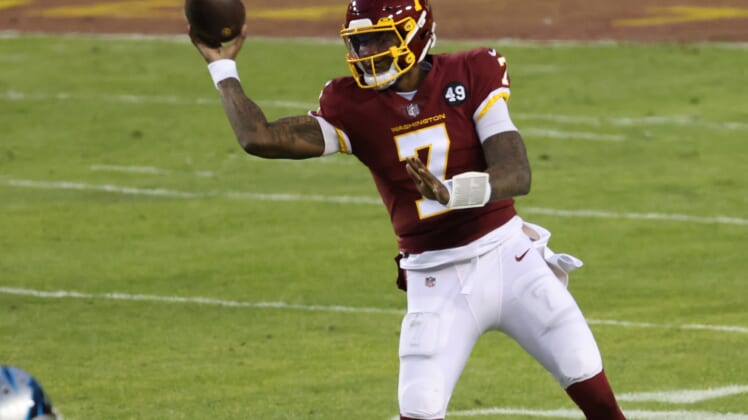 The Pittsburgh Steelers brought in 2019 first-round pick Dwayne Haskins to gauge whether or not to sign the former Washington Football Team quarterback, and opted to acquire him on Thursday.

Washington released Haskins abruptly this season due to his bad on-field performance and poor choices away from the gridiron, but there’s no denying he has talent — too much for Pittsburgh to pass up.

NFL Network’s Ian Rapoport initially reported on Haskins’ meeting with the Steelers, who appear to be counting on the rising third-year pro to bolster their quarterback depth behind longtime franchise cornerstone Ben Roethlisberger, per ESPN’s Adam Schefter:

Whereas the Panthers are likely looking for a young signal-caller who can either compete with Teddy Bridgewater or start right away, though, the Steelers seem committed to Big Ben at least through the final year of his contract in 2021. Those elements make Pittsburgh a more ideal landing spot for Haskins to revamp his NFL career.

It’s easy to be taken with the 23-year-old’s throwing power and physical tools, yet there’s obvious maturing Haskins needs to do before becoming a full-time starter at the professional level.

Haskins was always meant to be brought along slowly, yet in Washington, he was thrown into the fire too soon. That ultimately resulted in a 3-10 record as a starter, as Haskins logged a 74.4 passer rating, 60.1% completion rate, and 14 interceptions against 12 touchdowns across 16 total games.

All this was a far cry from Haskins’ one-year eruption at Ohio State, where he threw for 50 touchdowns to only eight picks and averaged over nine yards per pass attempt.

The Football Team should’ve known better than to put Haskins in a compromising position from the jump. Pittsburgh has a deserved reputation as a much more stable organization, and the team has had to deal with Roethlisberger’s multitudinous off-field issues in the past, not to mention spats with former offensive stars Antonio Brown and Le’Veon Bell.

Amid potential chaos, Steelers coach Mike Tomlin nevertheless keeps his players even-keeled and has them prepared well enough to be in consistent playoff contention. With Roethlisberger likely to retire after next season, Haskins could wait in the wings, take his time to adjust to a new system, and step on the field as the possible starter in 2022.

Pittsburgh is set up better than Washington was in terms of skill position players to support Haskins. Even if JuJu Smith-Schuster leaves in free agency, the young receiving corps will still have Chase Claypool, Diontae Johnson and James Washington, with the potential to add more weapons in the meantime.

It’s hard to think of a more ideal destination for Haskins than the Steelers. Plus, the franchise seems to covet quarterbacks like him given Big Ben’s massive build, so don’t be surprised if Haskins winds up being groomed as Roethlisberger’s successor with the Black and Gold.