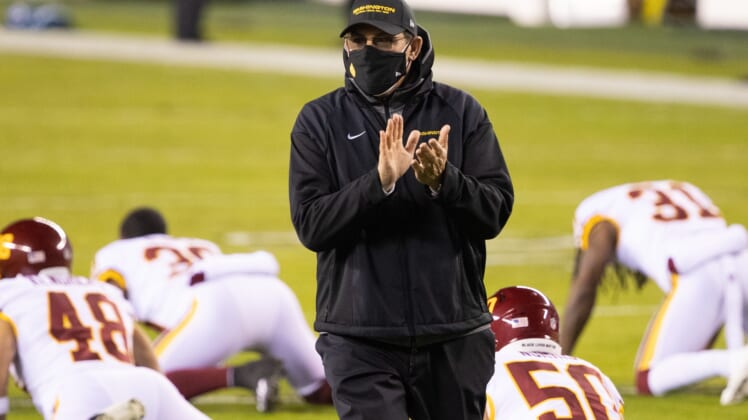 The Washington Football Team used a surge in the second half of this past season to win the NFC East and give the eventual conference champion Tampa Bay Buccaneers a run for their money on Super Wild Card Weekend.

Now with the 19th overall pick in the 2021 NFL Draft, along with its own second-round choice and two third-rounders, Washington is in prime position to upgrade the roster and fortify its standing atop the division.

While questions loom primarily around the quarterback position, there are other areas the Football Team should focus more on upgrading through the draft prior to addressing the situation under center. Let’s take a closer look at each specific early-round pick Washington has and which prospects should be targeted. The updated draft pick order is courtesy of Tanktathon.

It’s a tough call here as far as what to do if Marshall and Bateman are on the board, but given the multifaceted skill set Marshall boasts and his superior explosiveness, he feels like a better fit in Washington at least.

Marshall has a size and speed advantage over Bateman, and anything the Minnesota star does better is diminished by the fact that Marshall simply has more freakish athleticism to his game to go along with advanced route-running and a high football IQ.

Breakout Football Team tailback Antonio Gibson is entering his second season, and the fact that he managed 11 rushing touchdowns as a rookie should scare the rest of the NFL. Gibson primarily functioned as a receiver in college and has seamlessly converted to the backfield, which makes him a unique threat in the passing game.

With Gibson creating mismatch problems and able to be moved all over the formation pre-snap, and Terry McLaurin capable of playing outside or inside to create mismatches, adding Marshall would give Washington yet another premium pass-catcher for Washington to move around and put defenses in compromising positions.

As long as the Football Team can figure out a decent quarterback situation, look for Marshall to be the No. 1 target for when they go on the clock at No. 19. If, by some miracle, Lance is still there, then Washington will likely take him, or trade up if he continues to slide in the first round.

With Brandon Scherff hitting free agency, Smith isn’t a bad option to potentially replace him at guard. The Football Team may wind up spending a good chunk of cap space on a veteran quarterback, which will make it more difficult to retain key free agents like Scherff.

Most corners don’t boast Melifonwu’s 6-foot-3 frame, which gives him a distinct advantage in terms of length and jamming receivers in press man coverage. Washington has such an excellent pass rush, so having someone like Melifonwu on the outside could make the defense as a whole even more devastating if he winds up being a big hit in the draft.

Speaking of rushing the passer, Basham thrived in that role throughout his time at Wake Forest. In the last 19 games Basham played in college, he amassed 22.5 tackles for loss and 15 sacks, so he’s obviously capable of making splash plays versus the run as well. You can never have enough pass-rushers in the NFL, so Basham makes sense as a target despite Chase Young and Montez Sweat already playing in the nation’s capital.

It’s hard for the Football Team to go wrong here in Round 2, and with an extra third-round pick, they might be inclined to trade up in order to land one of these prospects. This trio is just the tip of the iceberg in terms of the quality draft entrants who could be immediate contributors to coach Ron Rivera’s 2021 team.

You may look at Newman’s college numbers at Wake Forest and wonder why he’d be selected so high. He transferred to Georgia ahead of the 2020 season, only to opt out due to COVID-19 concerns. Currently projected as a probable Day 3 selection, do not be the least bit surprised when Newman skyrockets up draft boards in the coming months, perhaps even to the second round.

Newman checked in to Senior Bowl practices at just under 6-foot-3 and weighs 235 pounds. His thickly-built frame is ready for the NFL, as is Newman’s immense arm talent, which was on display in his only full year as a college starter for the Demon Deacons. Pro Football Focus’ Anthony Treash provided further context for this assertion:

Picking 19th in the first round means Washington is probably out of range for one of the top four consensus prospects, but just look at the company Newman keeps in terms of making tight-window throws. And it’s not like Wake Forest has a ton of future NFL talent at the skill positions, with the possible exception of receiver Sage Surratt.

One telling measure of a quarterback is how well the players around him fare, and whether their play is elevated by his presence. That seemed to be the case for Newman during the 2019 campaign.

Think about this, too: Newman ran for 574 yards in his last collegiate season, so he’s definitely a dual-threat playmaker — a prototype the modern NFL is leaning into more and more.

Newman is impeccably accurate on downfield throws, and logged an 85.1 PFF grade in 2019 despite not playing at a big-time program. His mechanics are sound, with a compact, quick release and although his footwork and overall accuracy needs some improvement, we’re not talking about a Josh Allen-style overhaul here.

In the event the Football Team were to already have another QB in place, Togiai and McGrone are good pieces at positions of need.

Ford is a very hard-hitting safety who fits into the identity of the Football Team’s exceptional defense. Although his value at this juncture of the draft may be more to contribute on special teams in his maiden pro campaign, Ford has the ball skills, athleticism and potential to eventually carve out a starting role in Year 2.

If Newman isn’t the guy, perhaps Texas A&M’s Mond is another dual-threat quarterback Washington will consider. A full-time starter for three seasons running, Mond nearly led the Aggies to the College Football Playoff this past season, but fell just short. He threw 19 touchdowns to only three interceptions and ran for 294 yards and four scores on 74 carries.

The question is, can Mond function in an NFL offense? His arm strength is there, but he’ll need to continue cleaning up footwork, accuracy and maintain the improved decision-making he showed in his final college year. He’d probably be a better fit in some other situation where he might not be pressed into action as an NFL rookie.

There’s no guarantee that Moore will be around this late in the draft, but if he is, he’s a pure slot weapon who had 86 receptions, 1,193 yards and eight touchdowns in just eight games this past season. That kind of production against SEC competition, when he was clearly Ole Miss’ go-to guy, is very hard to overlook.

Moore’s short-area quickness, electrifying agility and game-breaking speed put him in the mold of draft classmate Rondale Moore of Purdue. The Boilermakers standout seems to be getting more hype right now, but it wouldn’t be a surprise to see Elijah Moore soar up draft boards in the coming months and get himself into Round 2.

The combination of Marshall and Moore in the receiving corps — again, with Gibson as the all-around lead back, McLaurin and an emerging stud at tight end in Logan Thomas — makes Washington’s offensive weaponry wildly more appealing than a season ago.

Newman is perhaps the most intriguing developmental quarterback prospect who’d be available outside the first round. His not playing in 2020 really makes him the wild card of the class at the most important position. If he sits behind a veteran for a year, though, there’s a chance Newman could hit big.

Again, Basham is more of a luxury pick than anything else, yet his knack for defending the run helps him stand out, and he offers a little more bulk to his frame than Sweat. Ryan Kerrigan is a free agent, too, so it may be that he leaves and depth on the edge becomes a need anyway.

With free agency becoming a priority well prior to the draft, though, it’s harder to project what Washington’s strategy is going to be than most other teams due to the uncertainty at quarterback.

What’s great is, the Football Team figures to have over $27 million in cap room to work with. Some players may need to restructure contracts or take discounts in order for Washington to land a viable signal-caller to lead the offense.

On the other hand, given how well Taylor Heinicke performed in the playoffs and that Alex Smith could still come back much stronger than he was in 2020 off a life-threatening leg injury, perhaps Rivers will go to an in-house option while the longer-term vision is worked out. The Football Team’s defense is good enough to content even with a game manager at quarterback.