The 2021 NFL Draft is loaded with premier players who didn't suit up for the college football season. Get to know these studs before they shine on Sundays. 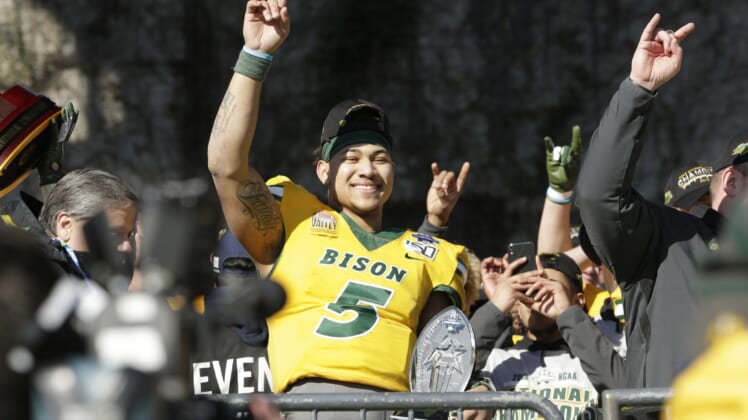 Since the majority of fanbases are already looking ahead to the 2021 NFL Draft — and even more will following Wild Card Weekend — it’s worth getting acquainted with some of the top prospects who opted out of the college football season.

We’ll provide a ranking of the players who are most likely to be selected in the first round, along with a scouting report based on what they’ve done on the gridiron to date.

Bear in mind that these are all exceptional players, and the rankings are essentially splitting hairs. We’ll also briefly analyze where each prospect could land in the draft. Be sure to get acquainted with these electrifying stars before they begin shining on Sundays in the NFL.

Allowing one sack in 1,376 snaps is good, right? Sewell was tasked with protecting Justin Herbert’s blind side for two seasons with the Ducks, and did an exceptional job at doing so.

You’d expect someone who’s 6-foot-6, 325 pounds with Sewell’s freakish athleticism to let his technique slip as he casts aside hapless defenders. But no, Sewell is actually advanced when it comes to hand placement, and pass protection base. He understands leverage really well, and almost looks like a ball-carrier in the open field when he’s hunting opponents to block out in space.

Sewell is an ideal fit in an outside zone-blocking scheme that relies heavily on a strong rushing attack. Really, though, he could do his best work in a pure downhill, power running game. He boasts the best blend of talent and pro-ready polish of any left tackle prospect since Dallas Cowboys star Tyron Smith when he came out of USC in 2011. Seriously, Sewell is that type of prospect at only 20 years old, and fully merits the No. 1 slot here.

Look for the Cincinnati Bengals to do all they can to land Sewell, who’s the best option to protect quarterback Joe Burrow. It’s possible Sewell falls to No. 5 overall where Cincinnati is selecting due to an expected run of quarterbacks, but there should be plenty of teams interested in trading up for Sewell’s services.

When the Tigers won the national championship in an epic 2019 season, Chase formed a dynamic duo with Justin Jefferson in LSU’s passing attack triggered by Burrow. Jefferson racked up 111 catches, 1,540 yards and 18 touchdowns, and then proceeded to be a phenomenal rookie with the Minnesota Vikings.

But while Jefferson was more of a possession target, it was Chase who generated more explosive plays. On 84 catches, Chase had 21.2 yards per catch en route to 1,780 yards and 20 trips to the end zone. How bonkers is that?

At 6-foot-1 and 200 pounds, the unanimous All-American plays even bigger than his size. His vertical leap is going to be eye-opening, and Chase’s ability to high-point and track the football on downfield throws makes him a unique deep threat.

Part of what always makes Chase a threat to rip off huge chunks of yardage is his ability to get separation on shorter routes and rack up yards after the catch. He has a knack for accelerating to and through the catch point, and is a savvy hand fighter to ward off any cornerbacks who want to get physical either in press man coverage or when the ball is in the air.

As for potential NFL destinations, Chase may not wait long to hear his name called on draft day. The Miami Dolphins at No. 3 overall make a lot of sense, and if the Bengals don’t go with a left tackle like Sewell, maybe they’ll see the appeal of reuniting Burrow and Chase to bolster their passing attack.

Given that linebackers aren’t among the most valuable positions in football, as opposed to, say, quarterbacks, cornerbacks, edge-rushers or left tackles, it’s saying something that Parsons is good enough to be slotted here. It means being in league with someone like Luke Kuechly, Bobby Wagner or Lavonte David.

That’s what Parsons brings to the table. He’s a sideline-to-sideline punisher in the running game, has the skill and football IQ to drop in coverage, and is effective as a blitzing pass-rusher.

Any NFL defense that runs a multiple, attack-heavy scheme would love to have Parsons as the catalyst in the heart of the front seven. He started as a freshman for the Nittany Lions and was impressive right away, yet his production made a leap in his sophomore season, when he had 108 total tackles (14 for loss), five sacks, five passes defensed and four forced fumbles.

Parsons is always squared up to the ball-carrier in the open field and will seldom miss a tackle. He’s always in ideal position to make a play, and his ability to close and finish is actually kind of unsettling to watch on tape because it’s so sudden.

Given how much Dolphins head coach Brian Flores loves his defense, he may lobby the front office to draft Parsons very early. However, with more pressing needs, Miami may pass, paving the way for some other lucky franchise to land Parsons. Look for the Denver Broncos at No. 9 overall as a strong possibility if Parsons is still available.

The Hokies’ first-team All-ACC selection from 2019 showed his prowess as a ball hawk with four interceptions and 12 passes defensed as a sophomore.

Teams that thrive in man coverage schemes are bound to gravitate toward Farley, who actually entered Virginia Tech’s program considered to be a promising wide receiver. There shouldn’t be any medical red flags about the knee injury that forced him to redshirt in 2017, because Farley has put together two healthy, productive seasons since then.

Because of his excellent length at 6-foot-2, Farley is difficult for opposing receivers to shake. His and zone coverage skills still need work, but he has both the skill set and the route concept savvy to probably pick up pattern-matching schemes at the pro level pretty quickly. His ball skills are obvious, and Farley can cut off receivers in pursuit of the ball with exceptional anticipatory skills.

With enough flashes of big hits and willingness to tackle versus the run, Farley has all the physical tools to start from Day 1 in the NFL, especially if he goes to a man coverage-heavy system that likes to bring pressure.

Three of the four NFC East teams are picking in the top 11 picks of the first round. Odds are, Farley and Alabama star Patrick Surtain II will be in competition to be the first cornerback off the board, with the distinct possibility that they land with either Philadelphia, Dallas or the New York Giants. The latter team is an especially great fit for Farley, who’d thrive under coordinator Patrick Graham.

Because of the position he plays, there’s a distinct chance Lance goes above the four young men ranked ahead of him among full-season opt-out studs in the 2021 NFL Draft.

Now, Lance did technically appear in one showcase game in 2020, but we still consider him an opt-out, because he did, in fact, forgo North Dakota State’s planned spring season, which starts up next month.

His 2020 showcase wasn’t anything to be excited about. Then again, it’s a ridiculous situation to be thrust into. What’s more useful is looking at Lance’s tape from the prior season, when he ran for 1,100 yards and 14 touchdowns.

Oh, that’s not all Lance did. He threw 28 touchdowns and zero interceptions. Talk about the epitome of a dual-threat quarterback, who hails from the same FCS powerhouse program as former No. 2 overall pick Carson Wentz and current Los Angeles Chargers backup Easton Stick.

Lance’s college system is really a pro-style offense, where the 6-foot-4, 226 pounder used his cannon arm, supreme rushing ability and his mind to baffle defenses en route to a national championship. He can still linger on his first read too often and is slightly inconsistent with accuracy, but the upside with Lance is enormous.

If you’re looking for an enviable combination of solid footwork, exceptional decision-making, a balanced throwing base, touch on downfield passes and an excellent pocket presence that allows for extended plays and tacklers bouncing off attempted hits, that’s what Lance brings as a passer.

Think of a more finished product than Buffalo Bills superstar Josh Allen, only with a little less arm strength but more dynamic ability as a runner. Sound good? Well, as long as Lance passes all the pre-draft tests and proves his level of college competition isn’t an issue, look for him to be the fourth quarterback drafted.

Possible landing spots for Lance will likely come down to who’s willing to trade up into the top 10 to get him. Keep an eye on the San Francisco 49ers (picking 12th) and New England Patriots (15th) if Detroit and Carolina pass on Lance at Nos. 7 and 8 overall.

The only reason Rousseau isn’t higher on this list is because he has only one year of extensive college starting experience. Otherwise, he’d easily crack the top three, because what he did in 2019 for the Hurricanes was nothing short of spectacular.

Last season, Rousseau racked up 19.5 tackles for loss and 15.5 sacks. He’s listed at 6-foot-7 and 265 pounds. Blend that size, athleticism and production, and you’ve got a pretty darn good prospect on paper.

Blockers have a difficult time even engaging with Rousseau at the point of attack because of his tremendous length. Rousseau admittedly can use his pure ability to beat offensive linemen, but what stands out about his time at Miami is how he was used. Thanks to his quickness off the ball, subtle lateral agility and strength, Rousseau often lined up inside to rush the passer.

As he adjusts to the NFL game and probably knocks some rust off after a year away from competitive football, whichever team drafts Rousseau can use him as a versatile rotation piece in their defensive line rotation until he’s ready to start full-time on the edge. However, Rousseau’s skill set and sheer dominance suggests he won’t have a steep learning curve, and will be ready with fresh legs for an excellent rookie year.

Rousseau is among the biggest wild cards due to the premium put on pass-rushers and the fact that this class isn’t filled with first-round prospects at that spot. Thus, look for teams who fall in love with Rousseau to explore trading up for him toward the early-middle part of Day 1.

Speaking of versatile, Slater has experience starting at both offensive tackle positions with the Wildcats. The good news is, he might have the most upside as an interior lineman or even a center in the NFL thanks to his football acumen.

But let’s not get it twisted: Slater can play at tackle if called upon. He’s extremely athletic and can kick back with the best tackle prospects in the 2021 class. He has a firm anchor as a pass protector and understands how to either force rushers upfield to clear the pocket, or he can seal them off to the inside. Slater shows the ability to handle stunts particularly well.

In the running game, Slater is excellent at finishing his first block, and getting to the second level to take on someone else. This is exactly the reason why he’s viewed as a good interior line prospect. He really plays within himself and doesn’t get sloppy with his technique.

Because of his versatility and technically sound, savvy approach to the game, comparisons will be drawn between Slater and Dallas Cowboys All-Pro guard Zack Martin. Although yours truly doesn’t believe Slater is quite of that caliber, he’s good enough to be a perennial Pro Bowler and should get close looks in the middle of Round 1 from teams like the Chargers (picking 13th), Vikings (14th) and Cardinals (16th).