Check here for the latest updates on Cincinnati Bengals quarterback Joe Burrow and his recovery from a major knee injury. 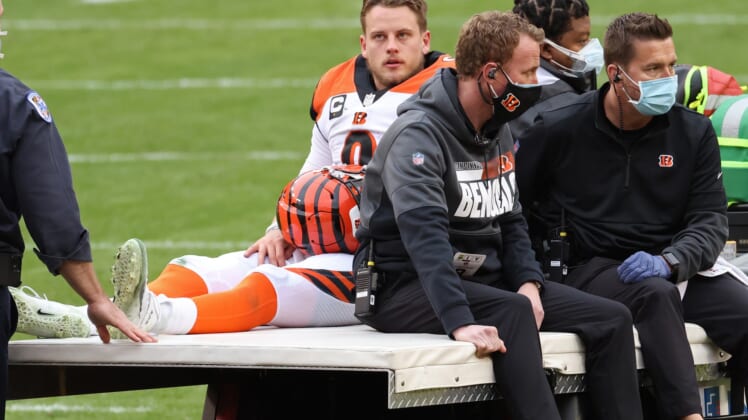 Cincinnati Bengals quarterback Joe Burrow was on pace to shatter multiple rookie passing records. He looks every bit the part of a franchise quarterback for the rebuilding team.

Unfortunately, Burrow’s rookie campaign came to a premature end when he suffered a torn ACL and MCL against Washington in Week 11. While the prognosis did not look good, some good news emerged from Cincinnati on Christmas Day when Burrow began walking again. More recently, the signal-caller expressed confidence he’ll be ready for Week 1 of the 2021 season.

An interview with Fox Sports personality Colin Cowherd offered a little bit of insight into Burrow’s recovery from surgery, which he’s doing in Los Angeles. When pressed about his timelien for returning to the field, Burrow is of the belief that he’ll be ready for the season opener in his sophomore NFL campaign.

“I think I’ll be ready. I think it’ll be just fine,” Burrow said.

A short but significant answer.

If there’s any common thread about Burrow’s football career to date, it’s that he’s defied the odds at every turn. Who would’ve pegged him to be the No. 1 overall pick in the 2020 NFL Draft prior to his breakout final year at LSU, where he led the Tigers to a national championship? He was barely on pro scouts’ radars at that point.

Now, Burrow is dealing with an entirely new beast, but major knee injuries aren’t quite as devastating as they used to be. For instance, the last Bengals quarterback to be selected atop the draft, Carson Palmer, blew out his knee in the postseason and took a long time to get back to who he was before then. Even still, there’s the thought Palmer didn’t reach his full potential due to the major injury.

Burrow’s game relies on extending plays with his legs, yet he’s effective and smart enough from the pocket to strictly get the job done there. Since it’s so early in his time in the NFL, it’s difficult to project Burrow’s future. Robert Griffin III probably came back too early from his knee injury to begin his second season, and never returned to the form he showed as Rookie of the Year in 2012.

None of this is to cast doubt or a cloud over the optimism Burrow is expressing to this point. It’s merely analysis of prior cautionary tales to underscore how vital it is for the Bengals not to press him back into duty.

In video footage posted to his Twitter account, Burrow gave Bengals fans a Christmas present that must’ve brightened their day:

What consistently stands out about Burrow is his poise, calm demeanor and quiet confidence that obviously resonated throughout the organization this season when he was on the field, as Cincinnati was competitive in the vast majority of his starts. Those attributes are on full display here.

This is a devastating injury the young signal-caller is recovering from. There’s a chance he won’t even be ready for the beginning of the 2021 campaign, potentially losing a chunk of his second NFL season. Having said that, it’s so encouraging to see Burrow up and moving around, suggesting he may well be ahead of the curve in his recovery.

Despite an uncertain future for Burrow and head coach Zac Taylor, the Bengals have to be excited about the fact that they dominated the Pittsburgh Steelers in a 27-17 win in Week 15 without their new face of the franchise. If Taylor can build on that in the next couple games, keep his job, and welcome Burrow back close to the start of next season, there’s plenty of reason for optimism in Cincinnati.

The Bengals announced on Twitter that Burrow had his reconstructive procedure on Wednesday, and it looks like his recovery outlook is extremely positive.

“Joe Burrow underwent successful surgery yesterday,” the team said in a statement. “The procedure went as planned and he is expected to make a complete recovery. Joe will begin the recovery process and we look forward to his return.”

Burrow’s quick decision-making and high football IQ helped him get the ball out fast as he took the NFL by storm, yet he still got sacked 32 times. If the Bengals are at all serious about building a championship-caliber team around their prized quarterback, it starts with fortifying the pass protection for Burrow up front, which should also help Joe Mixon get loose in the running game.

In any event, whatever the front office and personnel department do going forward, there must be a collective sigh of relief around Cincinnati upon hearing about Burrow’s outlook for a complete recovery. Whether he’s ready to go at the start of the 2021 season remains to be seen, but this news gives the Bengals plenty of hope for the future.

Horrible. It was pretty much confirmed Sunday evening that Bengals stud rookie quarterback Joe Burrow suffered a torn ACL in Week 11’s loss to Washington. We now have more confirmation on the extent of said injury, and it’s not good.

Multiple media reports indicate that Burrow suffered both a torn ACL and MCL in his left knee. This is the last thing that the Bengals and their fans wanted to hear. However, the structural damage to that knee does seem to indicate Burrow will be available for Week 1 of the 2021 NFL season. It’s all about surgery and how the talented young signal caller rehabs.

Burrow finishes his rookie season having completed 65% of his passes for 2,688 yards with 13 total touchdowns and just five interceptions in 10 starts. He was leading the NFL in both completions (264) and attempts (404) at the time of said injury.

In news most of us expected, initial tests on Cincinnati Bengals rookie quarterback Joe Burrow’s injury left knee show a torn ACL. According to Ian Rapoport of NFL Media, there could also be further damage to the knee.

Burrow suffered the injury in the third quarter of Sunday’s game against Washington. He was sandwiched in between two defenders and found himself hit awkwardly in the left knee. Burrow was carted off the field and ruled out of the game almost immediately by the Bengals’ PR team.

Joe Burrow sends tweet telling fans that he’s going to miss the remainder of the 2020 NFL season due to the knee injury he suffered on Sunday. There’s no further information in the specific injury, but it’s obvious he’s in line for a long rehab.

As you can see on the replay, Joe Burrow was sandwiched in between two Washington Football Team defenders. His left knee took most of the contact, forcing Burrow to be carted off the field.

Burrow was obviously in a tremendous amount of pain.

The Bengals almost immediately ruled Joe Burrow out with a left knee injury. That’s obviously not a great sign.

The reigning Heisman winner entered Sunday’s Week 11 outing having completed 65.4% of his passes for 2,485 yards with 15 total touchdowns and just five interceptions in nine starts. He was leading the Bengals to nearly 23 points per game after the team averaged a mere 17.4 points a season ago.

Needless to say, the hope is that Burrow’s injury is not as severe as it seems. That might be false hope given how quickly Cincinnati ruled him out for the remainder of the game. Ryan Finley ultimately took over under center.

Obviously, those watching the unfortunate events play out in the nation’s capital Sunday afternoon had their reactions. Primarily, one of shock.

We will have further updates as it relates to the Joe Burrow injury as soon as more information comes out. For now, it’s simply a wait-and-see approach.