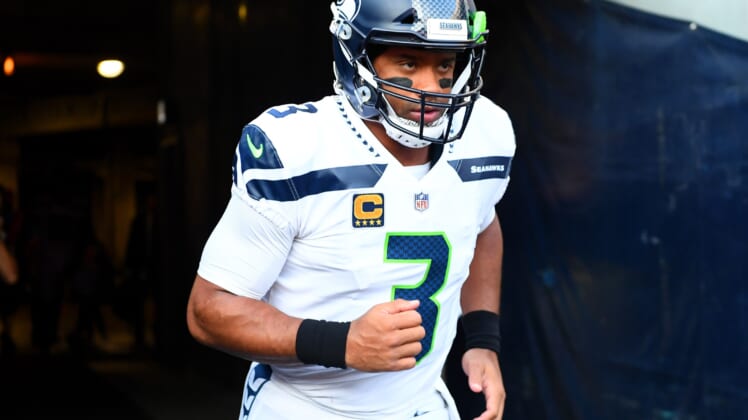 Russell Wilson is interested in playing elsewhere. That’s no secret. The Seattle Seahawks know it, as does everyone who’s even a casual fan of the NFL.

There are only four teams Wilson is considering going to and waiving his no-trade clause for. By far the most desperate, quarterback-needy team is the Chicago Bears, and Seattle could absolutely fleece them in a deal that would change the course of NFL history.

Of course, any blockbuster trade that sends Wilson to Chicago will lead to an epic ripple effect. Here’s a look at the ultimate scenario that would not only give Seattle plenty of means to rebuild and retool its roster with far greater flexibility on the fly, but also benefit numerous other teams around the league in the process.

How often do you find a roundabout trade scenario where almost one-fifth of the league wins? This is unlikely to happen, yet it’s an outcome any of these franchises would be plenty happy about. We’ll first reveal the ultimate Russell Wilson trade scenario, and break down what it means for the six teams involved directly and by proxy.

It takes a lot for Chicago to get the job done, but any scenario where it gets to hang on to Khalil Mack and Allen Robinson was going to cost a tremendous amount of draft capital.

Losing a former first-round corner in Fuller and one of the game’s premier interior defenders in Hicks doesn’t make this deal any easier for the Bears to swallow either. Getting Wilson is well worth it in the end, though.

Who was the last great Chicago QB? Jay Cutler is the best one that comes to mind, so that’s a pretty dire state of affairs in the Windy City. Imagine how much of a hit Wilson would be, and how relieved the fanbase would be at not having to cheer for the likes of Mitchell Trubisky and Nick Foles anymore

Bears general manager Ryan Pace deserves all the heat he takes for drafting Trubisky so high. If he found a way to land Wilson, that mistake would be rectified, and suddenly Pace’s building of the rest of the roster would look pretty darn good. He’d all but guarantee Robinson stays in Chicago for the long haul, too.

The offensive line came together down the stretch of last season for the Bears, as tailback David Montgomery enjoyed a highly productive December to help secure a playoff berth. That’s yet another attractive trait Chicago has as Wilson assesses his prospective next team.

With the salary cap expected to soar in 2022 and Seattle taking on some of the hit from Wilson’s contract this year, the Bears can afford to part with their slew of draft picks to get their new face of the franchise. There’s no question they won the Mack trade with the Raiders, and they have a chance to make an even bigger splash with this one and legitimately compete for a Super Bowl right away.

In order to make the cap numbers work and not crush their rebuilding hopes, this epic trade scenario required Seattle to part with left tackle Duane Brown and stud receiver Tyler Lockett. That doesn’t exactly set up Darnold for immediate success, or so it would seem.

Bear in mind that the Seahawks would now have enough capital to do just about anything in the draft. They’d also have a superior talent as their No. 1 cornerback in Fuller, as opposed to free agent Shaquill Griffin. Hicks would be an absolute beast on the defensive line alongside Jarran Reed, too, opening up chances for young edge-rushers like L.J. Collier, Darrell Taylor and Alton Robinson to flourish.

Trading Wilson to Chicago costs Seattle $7 million, but the team saves $24 million by offloading Brown and Lockett, netting assets in exchange instead of watching both of them potentially walk on the open market in 2022 for no compensation.

Reasonably restructuring the contracts of All-Pro linebacker Bobby Wagner and kicker Jason Myers, in tandem with the Brown and Lockett trades, creates a total of $42.3 million in cap room for the Seahawks, per Over the Cap. Greater measures can be taken by the team, of course, given that this is a unique salary cap situation.

In any event, the funds are there to take on Fuller and Hicks. Seattle would also get Darnold and a new No. 2 receiver in Harry to pair with DK Metcalf. Harry wouldn’t have the pressure of being a top wideout like he faced in New England, and is another big-bodied target who’d create a fascinating complement to Metcalf on the outside.

Harry’s huge discount to what Lockett would be owed is also a means of making cap space to re-sign linebacker K.J. Wright to a short-term, backloaded deal.

Then, of course, the draft war chest gives general manager John Schneider all kinds of ways to proceed in retooling the roster: Seven picks in the first two rounds of the next two drafts, plus what Seattle has on its own.

If Darnold flops, so what? The Seahawks either pick high again, or high enough to trade up and draft a new QB in 2022. Or, they can cash in their assets for a proven player as Wilson’s long-term successor next offseason should Darnold not pan out.

Seattle head coach Pete Carroll wants to run the ball and stop the run. He’s old-school. That’s a paradigm Darnold would love to fit in with, as he had no steady running game, no weapons like Metcalf, nor a defense like that of the Seahawks at any point during his New York Jets tenure.

Look at how pretty New England is suddenly sitting. The Patriots had a quarterback in Cam Newton who didn’t at all fit into the mold offensive coordinator Josh McDaniels had grown accustomed to after many years of coaching Tom Brady. By giving up their second-round pick for Brady’s would-be successor once upon a time, Garoppolo goes to the place he’s most coveted.

What’s more, head coach Bill Belichick gets to sell early on a potential first-round bust in Harry, and has the cap room to sign Lockett to a long-term contract once he hits free agency in 2021. Lockett is a shiftier player who can create separation in the short passing game, which makes him a much better fit in New England’s system than Harry will ever be.

Since history shows Belichick likes to trade out of the first round anyway, he won’t mind parting with a 2022 Day 1 selection and a third-round compensatory pick from this year to get someone like Lockett, who has 182 catches over the past two seasons.

With key defensive leaders in Dont’a Hightower and Patrick Chung reportedly returning to the Pats in 2021, too, they were already going to be improved. Acquiring Garoppolo and Lockett for a combined $36.3 million cap hit this next year is an absolute bargain, and would greatly enhance their anemic passing attack from a season ago.

Plus, New England would still have plenty of cap room going forward to retain their new QB-receiver tandem, along with a 2021 first-round pick who could make an instant impact.

Pro Football Focus ranked the Chargers’ offensive line dead-last in the NFL in 2020. That’s not ideal with a young stud at quarterback like they have in Justin Herbert.

Rather than hoping someone like Rashawn Slater falls to 13th overall in the draft — he probably won’t, and if he did, he could slide in at guard— or in general asking a rookie to fill one of the most important positions on the field, Los Angeles has enough room under the cap to take on Brown at left tackle for $11.35 million.

A second-round pick is a steep price for a player who turns 36 in August and is due to be a free agent next offseason. Nevertheless, it’s worth the risk for the Chargers, who need to be in win-now mode while Herbert is under his rookie contract.

Think about what happened to the Kansas City Chiefs in Super Bowl LV. Their superstar passer Patrick Mahomes didn’t have either of his starting tackles, and was under constant duress. Even his magic couldn’t prevent the Tampa Bay Buccaneers from routing the Chiefs 31-9.

Herbert was essentially running for his life or getting hit as he threw all the time as a rookie just as Mahomes was on Super Bowl Sunday, yet still put up phenomenal numbers.

With Mahomes and Kansas City in the AFC West division, the Chargers must do all they can in the near future to win a Super Bowl. If that means parting with a high Day 2 pick to address an obvious need for probably no more than two seasons, so be it if it results in a Lombardi Trophy.

In light of the recent news that the Chiefs cut ties with both starting tackles from their Super Bowl-winning team in Eric Fisher and Mitchell Schwartz, it’d hurt the Bolts’ division rivals even more if they were able to acquire someone like Brown.

Robert Saleh was the 49ers’ defensive coordinator under Kyle Shanahan before taking the Jets’ head coaching job this offseason. If all this madness were to play out in a hypothetical trade that sends Wilson to the Bears, they could both make a play for the next big-time field general, Deshaun Watson.

Since New York owns the second overall pick in the draft, though, it’s likely Gang Green will just choose BYU’s Zach Wilson or whichever prospect it views as the next-best guy behind Clemson’s Trevor Lawrence, presuming he goes first to Jacksonville.

But really, when it wouldn’t cost the 49ers hardly anything to part ways with Garoppolo, landing a second-round pick for him from New England is exceptional. There’s reason to believe this could happen, too: Belichick and Shanahan have a ton of mutual respect, and San Francisco traded a second-rounder for Jimmy G in the first place.

It’d only be fair to return the favor with mirroring compensation, wouldn’t it? Carson Wentz went to Indianapolis for essentially a first- and a third-round pick, after all.

That extra pick the 49ers would get may help them net whoever they view as an upgrade over Garoppolo for next season. It’s unclear who the team believes that to be, whether it’s an established pro or an incoming rookie, but at 12th overall with an extra second-round chip in tow, San Francisco would be in an ideal spot either way.

The Jets already have two first-rounders, a second-rounder and two third-round selections in 2021. They have such a huge influence over how the draft plays out. Netting yet another second-round choice just gives them all the more flexibility to either keep leveraging their position for more picks, or to trade up for a prospect they might really like at any point in the first three rounds.