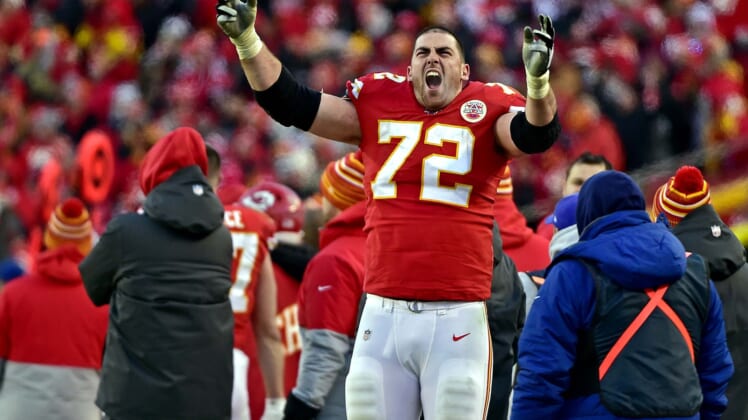 Kansas City Chiefs left tackle Eric Fisher was the first overall pick in the 2013 NFL Draft, and amid salary cap difficulties, the team decided to release him and All-Pro right tackle Mitchell Schwartz on Thursday.

Fisher is also battling back from a torn Achilles suffered in the AFC Championship Game this past postseason, which creates more uncertainty about his future, while Schwartz could be headed for retirement.

When the team’s official Twitter account posted about Fisher being let go, it didn’t sound like there were firm plans in place to bring him back, and the same was true for Schwartz:

No real hint in that statement that an eventual reunion could be in store, which is something of a surprise.

Fisher may not have fully lived up to his gaudy draft billing, yet he’s been a serviceable starter who’s certainly an above-average player at one of the most important positions in football. He ranked a career-best 16th in Pro Football Focus’ grades among offensive tackles in 2020.

There’s no denying Schwartz is an elite player, though. He was PFF’s fourth-ranked tackle in 2018 and No. 3 tackle in 2019. He was also an iron man until this past season, when he appeared in only six games after not missing a single contest in eight prior years.

According to The Kansas City Star‘s Herbie Teope, Schwartz is likely to retire at age 31.

The decreased NFL salary cap definitely had something to do with Kansas City’s surprising transactions. Cutting ties with Fisher saves the Chiefs just under $12 million in cap space, per Over the Cap, and Schwartz’s release saves them about $6 million.

Kansas City Chiefs offense in danger of 2021 collapse after cuts

Since Fisher already got hurt so late in the playoffs, Kansas City was already probably preparing for life without him this coming season. That said, abruptly discarding a serviceable veteran who’s been a franchise cornerstone for years is a little puzzling.

Whether he’s retiring or not, the Chiefs should’ve held on to Schwartz for as long as possible

The subheading to this section may sound hyperbolic on the surface, yet think about what happened the last time Kansas City took the field on Super Bowl LV Sunday.

With Fisher and Schwartz sidelined, superstar quarterback Patrick Mahomes was running for his life as the Tampa Bay Buccaneers hounded him all evening, resulting in a 31-9 defeat for the Chiefs.

Mahomes just signed a monster contract extension after winning Super Bowl MVP honors last offseason. He had a heck of an encore act to lead the organization back to the Big Game, but if general manager Brett Veach and the personnel department don’t take extreme measures to ensure Mahomes is protected, this is all going to go south in a hurry.

Another factor to consider: Wide receivers Sammy Watkins, Demarcus Robinson and Byron Pringle are all free agents. That leaves the receiving corps extremely thin behind Tyreek Hill and Mecole Hardman.

Everything has looked so easy for Mahomes, who stepped in as a first-time NFL starter and won MVP honors in 2018, and the Chiefs haven’t looked back. Offensive coordinator Eric Bieniemy could easily become a head coach next offseason, which would eliminate some key continuity on Andy Reid’s staff.

Are the wheels suddenly coming off for a would-be dynasty? KC’s highest-paid players like Mahomes, defensive end Frank Clark, and interior rusher Chris Jones should all restructure their contracts to try to free up cap space so that the NFL’s best QB doesn’t get crushed in 2021.

Only so much can be done through the draft, and the Chiefs are so far back in the order that they can’t realistically expect tons of quality players to come in and contribute right away. With limited funds to spend in free agency, too, the AFC could be much more wide-open going forward than was previously imaginable.