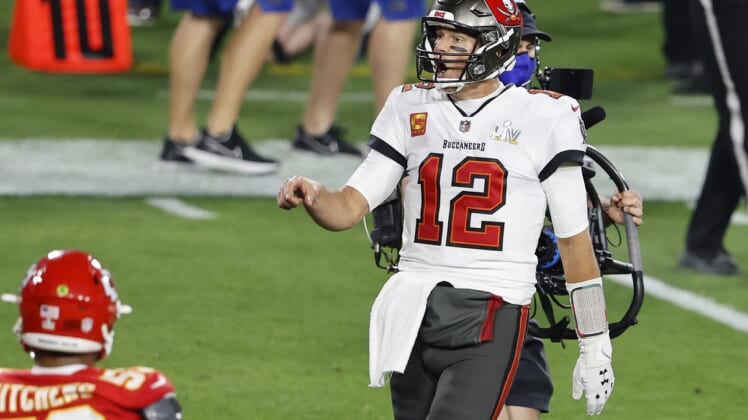 Shocking. That has to be the best explanation for what we saw in the Tampa Bay Buccaneers blowout win over the Kansas City Chiefs in Super Bowl LV Sunday evening.

The game started out slow for both offenses with three consecutive three-and-outs. That’s when Tom Brady and the Buccaneers’ offense picked it up big time. He threw three touchdowns against zero interceptions, vastly outplaying reigning Super Bowl MVP Patrick Mahomes in the process.

Led by Todd Bowles, the Buccaneers’ defense did pretty much everything it wanted to do against Mahomes. It took advantage of two backup tackles being forced into starting roles. The likes of Shaquil Barrett, Antoine Winfield Jr. and Devin White came to play big time.

In the end, it resulted in a stunning 31-9 upset win for the homestanding Buccaneers against the defending champion Chiefs. Here’s look at the top takeaways from Super Bowl LV.

We saw it throughout the first half at Raymond James Stadium in Tampa Bay Sunday evening. At least two questionable calls going against the Chiefs defense — both of which led directly to Buccaneers touchdowns.

The first one was a holding call against Kansas City cornerback Charvarius Ward on a Tom Brady pass that was intercepted by Tyrann Mathieu. The Buccaneers would ultimately score a touchdown on a pass from Brady to Rob Gronkowski to take a 14-3 lead.

Then, late in the second quarter, Mathieu himself was called for a pass interference at the goal line when in coverage against Mike Evans. One play later, and Brady hit Antonio Brown for his third touchdown pass of the first half and a 21-6 halftime lead. We’re not going to blame officiating for the Chiefs’ upset loss. That would be foolhardy. They just didn’t play disciplined football. Even then, the zebras did not help in Super Bowl LV.

Rob Gronkowski turns back the clock

Gronkowski opened up the touchdown scoring in Super Bowl LV with an eight-yard catch from Brady late in the first quarter. The future Hall of Fame tight end then scored from 17 yards out with about six minutes remaining in the first half to give his Buccaneers a 14-6 lead. A total of five catches for 42 yards and two scores in the first 30 minutes.

It’s pretty shocking stuff given that Gronkowski caught a grand total of two passes in the Buccaneers’ three playoff games leading up to the Super Bowl. He was used more as a decoy and a blocker. Not what you’d expect from one of the greatest receiving threats at tight end in NFL history.

With that said, Gronkowski was able to turn back the clock in a big way less than a calendar year after he came out of retirement to join Brady in Tampa Bay. It set the tone early on for the Buccaneers’ offense after some initial struggles from this unit to open the game.

Is Eric Fisher one of the top left tackles in the NFL? The objective answer to that question would be a resounding no. What we do know is that he has provided stability for Patrick Mahomes from the blindside over the past few seasons.

Once the former No. 1 pick went down to a torn Achilles in the AFC Championship Game, it became clear that the Chiefs would be in trouble against a raging Buccaneers defensive line. Add in the injury to starting right tackle Mitchell Schwartz, and that was magnified further.

From the get in Super Bowl LV, Kansas City had to change its offensive scheme. That included Mahomes getting rid of the ball in quick fashion. It threw off his timing with both Tyreek Hill and Travis Kelce, leading to consistency issues on offense. That was a major takeaway in a game that saw Mahomes complete 26-of-49 passes for 270 yards with zero touchdowns and two interceptions.

Sans a 26-yard run from rookie Clyde Edwards-Helaire to open the third quarter, Kansas City’s running backs simply could not get anything done against a stout Buccaneers defensive line in Super Bowl LV. All said, Chiefs backs tallied 69 yards on 11 attempts. In fact, Patrick Mahomes was the team’s second-leading rusher with 33 yards on the ground.

We know that the bread-and-butter of Kansas City’s offense is Mahomes and the passing game. Even then, getting some balance to throw off edge rushers Shaquil Barrett and Jason Pierre-Paul was going to be big here. Forcing Vita Vea away from the trenches was also going to loom large.

None of that came to fruition. And when you add in the injuries Kansas City had at tackle heading into the big game, it’s clear that the Buccaneers were attempting to do on defense. The scheme worked perfectly for pretty much the entire evening at Raymond James Stadium.

Tom Brady is the greatest of all-time

Tom Terrific completely outplayed Patrick Mahomes in Super Bowl LV. That’s not even a controversial statement. It is reality. And now, it means any debate regarding Brady’s status as the greatest of all time can now be thrown out the window. The 43-year-old Brady made his debut back in November of 2000. Mahomes was five years old.

Fast forward 21 years, and Brady just earned his seventh Super Bowl title. In the process, he completed 21-of-29 passes for 201 yards with three touchdowns against zero interceptions. It really was a clinic from Mr. Brady in Tampa Bay on Sunday evening.

We’re actually running out of expletives to define what Brady has done throughout his career. Ten Super Bowl appearances. Seven Super Bowl titles. And in his first season without Bill Belichick, Brady led one of the most dormant organizations in professional sports to just its second title. We can talk until we’re blue in the face about Joe Montana’s Super Bowl success. After all, he was perfect in four tries. Even then, Brady is the unquestioned greatest of all-time Sunday night’s performance in Super Bowl LV clinched this.

Did distractions and injuries hurt the Chiefs?

We all read the stories about Andy Reid’s son being involved in a car accident near Arrowhead Stadium late last week. Currently Kansas City’s outside linebackers coach, Britt Reid was reportedly under the influence of alcohol when he was involved in a multi-car accident — seriously injuring a five-year-old girl in the process.

For the Chiefs, this had to act as a major distraction. As mentioned above, the injuries to their two starting tackles did not help on the field in Super Bowl LV. The turf toe star quarterback Patrick Mahomes had been dealing with could have also played a role in Kansas City’s brutal loss.

This isn’t to make excuses. It’s not to correlate a serious car accident with a game. Rather, something seriously seemed off for the Chiefs in a 31-9 loss to Tampa Bay. It’s certainly something we’re going to hear a whole heck of a lot about in the coming days and weeks.

There was some talk ahead of Super Bowl LV that Bruce Arians could step down and let this defensive coordinator take over head-coaching duties should Tampa Bay come out on top Sunday. While that’s highly unlikely to be the case, Bowles more than proved himself as an elite defensive mind in this one.

Whether it was putting pressure out on the edge against the Chiefs’ two backup tackles or making sure rookie safety Antoine Winfield Jr. could do his thing in centerfield, everything Bowles did in Super Bowl LV worked. He schemed against an elite-level Chiefs offensive coaching staff at a level we have not seen during the Andy Reid era. The end result was one of the best defensive performances we’ve seen in the modern history of the big game.