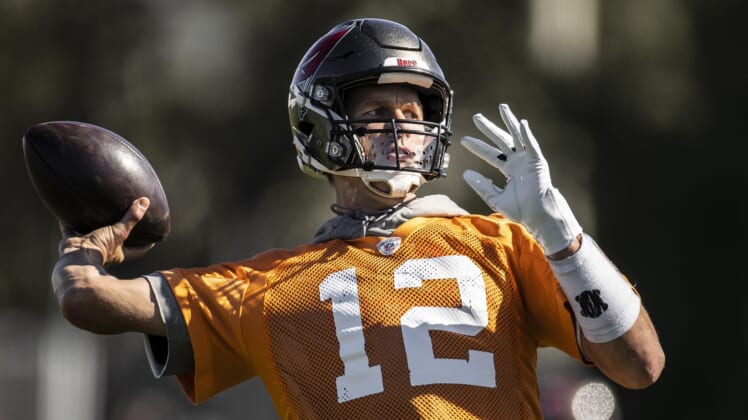 Sunday marks the 55th Super Bowl in NFL history, with a highly-touted matchup between the Tampa Bay Buccaneers and the Kansas City Chiefs–or, as many are calling it, Tom Brady vs. Patrick Mahomes.

It’ll be Brady’s tenth Super Bowl appearance, and he’s vying for his 7th ring, the most by any NFL quarterback. It’s one of the reasons why many football fans consider Tom Brady the G.O.A.T., whether they’re fans or not. In his first season not as a New England Patriot, Brady led one of the least winning clubs in the league to the championship game and, of course, broke and set many records in the process.

While some are calling Tom Brady the underdog for this year’s Super Bowl contest, it’s hard to think that the best quarterback of all time could be considered less likely to win. Brady is known, of course, for winning, and it’s very possible that he could do it again, winning the Super Bowl for the 7th time as the oldest quarterback in NFL history to win it. Here are the 5 reasons Tom Brady will lead the Tampa Bay Buccaneers to Super Bowl victory.

1. Tom Brady has been the underdog throughout the NFL playoffs

Brady thrives under pressure, keeps a cool head, and sticks to his game plan. TB12 has been excellent throughout his career at keeping the outside noise out of his head, and things won’t change as he enters another Super Bowl. He was even drafted as an underdog (pick 199 in 2000, in case anyone forgot), and turned that lack of faith in his ability into an illustrious, record-breaking career. In short? Don’t ever tell Tom Brady he can’t do something.

While this isn’t so much of a pro for Tom Brady as it is a con for Patrick Mahomes, it holds fruit. History dictates it’s extremely difficult to win back-to-back championships, and, in fact, Brady himself was the last one to do it as a member of the Patriots following the 2003 and 2004 NFL seasons.

It’s extremely unlikely Brady won’t compete his absolute hardest to prevent someone else from winning back-to-back championships — especially if the second victory is a win over him.

3. Tom Brady and the Bucs have home-field advantage

Playing in one’s home stadium for the Super Bowl would typically be a big edge. Although it may not seem like much this time around due to limited fan capacity, head coach Bruce Arians told reporters it meant more than meets the eye. It allows the players to sleep in their own beds, stick to their own routines, and keep everything normal.

For Tom Brady, who has a rigorous and specific schedule, the ability to leave it unchanged makes the Big Game experience substantially less cumbersome, and gives him even more peace of mind and fewer disruptions in preparing for his record 10th Super Bowl appearance.

Read More: Bruce Arians has no plans to retire regardless of Super Bowl LV outcome

4. Tom Brady can stick it to Bill Belichick and the New England Patriots

For a long time, Tom Brady and Bill Belichick were synonymous with success for the New England Patriots. That is, until Brady joined the Tampa Bay Buccaneers roster. A competitor like Brady, you can bet, is keeping score right now, despite the respect he has for his former coach.

The question of whether Brady or Belichick was more vital to the team’s success swirled around the Bucs’ every victory. Now, with New England missing the playoffs for the first time since 2002, Brady can prove that he was the greater reason for the Pats’ dynasty. Winning a Super Bowl without Belichick would answer the questions and prove that Brady is, as Danny Amendola said, the definition of success.

5. Bucs receivers have left tons of yards on the field in the playoffs

Jon Ledyard tweeted that PFF credited the Tampa Bay receivers with an “extremely generous” 12 drops in the playoffs, not including semi-tough and tough passes that could have been caught but were dropped.

Brady’s stats list him as 60-of-109 passing in the postseason, and 12 of those were the aforementioned incompletions. With two weeks to deal with this and adjust the issues, it feels far-fetched that stars like Mike Evans, Chris Godwin and Rob Gronkowski will keep dropping footballs.

Godwin has dropped six passes on his own and, with Brady’s leadership and knack for uplifting even the most modestly skilled receivers, he probably spent the two weeks leading up to the Super Bowl building Godwin up, because let’s face it, he’ll need him to be on point to dethrone the Chiefs.