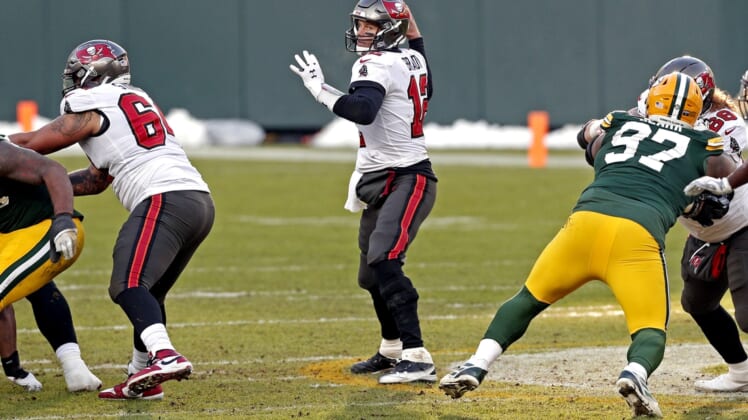 Tampa Bay Buccaneers legend Tom Brady is set to appear in his third Super Bowl since turning 40. No other quarterback in league history has started even one big game past the age of 39.

It really is stunning what Brady has been able to do. We’re talking about a dude who is slated to make his 10th Super Bowl start in just over two decades in the league. He’s a quarterback who is showing no signs of slowing down.

When asked about when he might hang them up during media week at Super Bowl LV in Tampa on Monday, Brady had a rather interesting response.

Tom Brady seemingly open to playing beyond the age of 45

“I would definitely consider that,” Brady said when asked about playing a few more seasons while noting it would take “100 percent commitment.”

Brady, 43, has one more year remaining on the contract he signed with Tampa Bay ahead of the 2020 season. However, it’s becoming clear that he wants to play even longer. These comments also come after reports surfaced Brady was open to playing a couple more seasons.

Unlike what we saw from Peyton Manning years back and Drew Brees this past season, there’s absolutely no sign that Brady is slowing down at his advanced age. In fact, he’s coming off one of the better statistical performances we’ve seen from the six-time Super Bowl champion in years.

Those are some eye-opening numbers from someone who will turn 44 about a month before the 2021 season gets going. In comparison to previous seasons, they also tell us a story of a quarterback who is not slowing down.

In fact, Brady averaged 4,372 yards with 32 touchdowns and eight interceptions over the course of his final decade with the New England Patriots. Let that sink in for a second.

A win over the Kansas City Chiefs in Super Bowl LV on Sunday would represent Brady’s seventh title since he entered the NFL in 2000. It would also surpass another GOAT in that of the NBA’s Michael Jordan for titles, something that’s not lost on Brady.

“He’s (Jordan) is one of my sports idols,” the quarterback said. “For me, it’s part of being a part of a lot of great teams.”

As this point the accolades continue adding up for Brady as he prepares for yet another chance to prove his worth as one of the single greatest players in professional sports history.