The Tampa Bay Buccaneers had better cover. Otherwise, one of the largest Super Bowl LV bets anyone is likely to see will cost one sad soul millions of dollars. 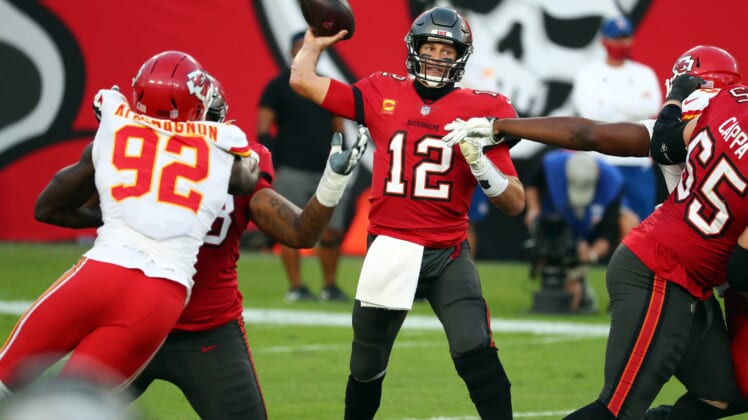 There are bold wagers, then there’s sheer madness. That line may have been crossed by somebody who probably makes any other Super Bowl LV bets spectators will be sweating about next Sunday pale in comparison.

BetMGM announced that its sportsbook had accepted a wager of $2.3 million on the Tampa Bay Buccaneers to cover their 3.5-point spread against the Kansas City Chiefs.

Here’s the news from BetMGM that was tweeted out on Friday:

What an absurd amount of money to bet on anything. Obviously, this bettor has plenty of cash to burn and can confidently burn through the big bucks without so much as batting an eye.

Imagine having this much dough on the line for what’s essentially a 50-50 outcome. Super Bowl Sunday sweats are a real thing for most bettors, but being out a couple million if Tampa Bay loses by four or more points against the reigning champion Chiefs would sting quite a bit.

So what do we think? Is it absurd to bet on Tom Brady and the new-look Bucs against Patrick Mahomes and Kansas City’s seemingly unstoppable offense?

It’s a very fine line, but a significant one, between three points and 3.5 when it comes to point spread betting. Firstly, as the line currently stands right now, there’s no possibility for a push, and there’s the cushion of a full field goal as a cover.

To further underscore the value of taking Tampa Bay, Super Bowl LV itself is taking place at Raymond James Stadium in Tampa, Florida. It’s the first time ever a team has legitimately hosted the Super Bowl.

When two teams are perceived to be evenly matched, home-field advantage is worth approximately three points. While there won’t be as many fans in attendance as usual due to COVID-19 protocols, what the spread tells us is that the Chiefs would probably be closer to 6.5-point favorites on a neutral field.

Oddsmakers aren’t going to create a spread that high for a Super Bowl, because action would predominantly skew too far to Kansas City’s side. Nevertheless, you can see how there’s some low-key, serious hidden value in betting the Buccaneers.

There’s plenty to motivate the supremely competitive athletes participating in this game as it is, but the implicit disrespect of the point spread is sure to give someone like Brady just another added edge to prove he can hoist a seventh Lombardi Trophy at age 43.

One more point: These teams met in Week 12 during the regular season, just before the Bucs’ late bye. The Chiefs jumped out to an early lead, but Tampa Bay made it tight at the end as Kansas City secured a 27-24 victory. That effort would’ve been good enough to cover then, and the Bucs has rattled off seven straight victories since then.

Sure, putting millions of dollars on the outcome of a game is outrageous, but going with the Super Bowl’s first true home team with the GOAT quarterback in Brady leading the charge actually appears to be the savvy investment.