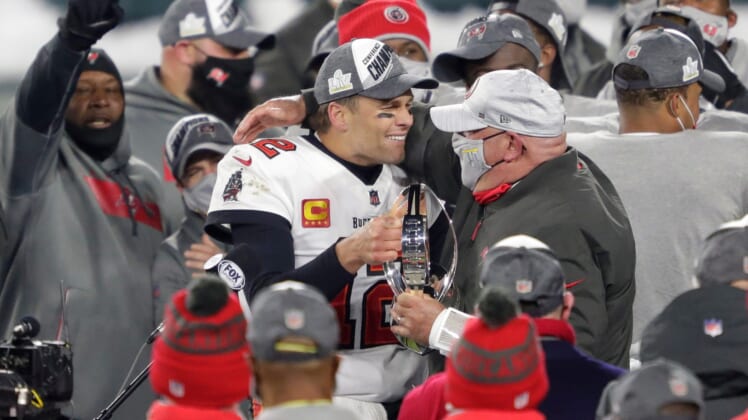 Tampa Bay Buccaneers quarterback Tom Brady is about to play in his third Super Bowl since the all-time great turned 40 years old. To put that into perspective, no other quarterback in NFL history has started a Super Bowl at the age of 40-plus.

What we’re seeing from Tom Terrific at the age of 43 is nothing short of extraordinary. Thus far this postseason, Brady has compiled eight touchdowns against three interceptions in three games.

He’s coming off a brilliant regular-season performance and is about to make a record 10th start in the Super Bowl. So, why call it quits?

“In his mind, I know that he doesn’t think next year is going to be it for him,” NFL Media’s Jeff Darlington noted on Wednesday. The insider, who is close with the Brady camp, also said that the quarterback’s ultimate retirement will have to do more with family than his performance on the football field.

As we’ve seen with Brady in his first season with the Buccaneers after spending the past two decades in New England, there’s no sign of the quarterback slowing down.

The six-time champion completed 65.7% of his passes for 4,633 yards with 40 touchdowns against 12 interceptions during the regular year. Statistically speaking, it was the best performance we’ve seen from Tom Brady since all the way back in 2010. Talk about turning back the clock.

Brady signed a two-year, $50 million contract with the Buccaneers last March. This means that he’s already slated to suit up for the team during the 2021 season. Even then, the suggestions are now that Brady will play in 2022 and beyond.

Still a top-five signal caller, there’s no football reason for Tom Brady to step away from the game. That’s magnified by the fact that he led Tampa Bay to its first playoff appearance since the 2007 season. There seems to be a good thing working with the Buccaneers and head coach Bruce Arians, who has also noted he’s going to return in 2021.

Brady and his Buccaneers will take on the defending champion Kansas City Chiefs in Super Bowl LV on Feb. 7. They are minor underdogs as the all-time great looks to win his seventh title.