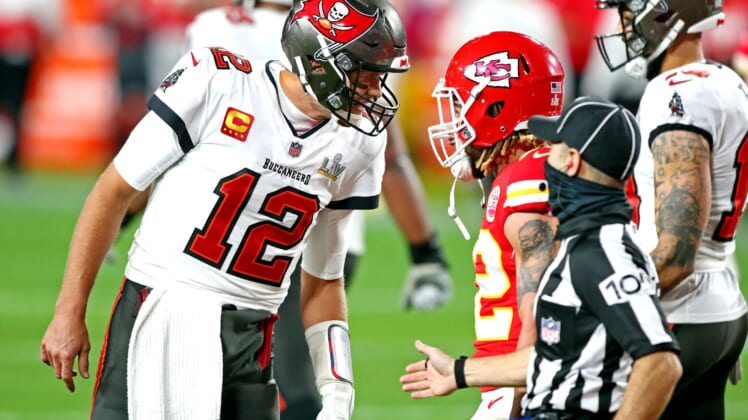 The Kansas City Chiefs had the Tampa Bay Buccaneers where they wanted them in the second quarter of Super Bowl LV Sunday evening.

Tampa was facing a third-and-four from the Chiefs’ 32-yard line when a tipped Tom Brady pass landed into the hands of Pro Bowl Chiefs safety Tyrann Mathieu.

You can be the judge.

It really did seem to be a ticky-tack holding penalty on Ward, especially given that bid-bodied Buccaneers wide receiver Mike Evans was being physical himself.

Instead of facing a fourth down and a likely field goal, Tampa Bay would go on to score a touchdown on this pass from Brady to Rob Gronkowski. It represented their second connection for a score in the first half and a 14-3 Buccaneers lead over the favored Chiefs.

Under normal circumstances, that should not be called. But given that the ball was batted at the line, the call was even more egregious.

It was yet another example of some questionable calls from officials early on in Super Bowl LV in Tampa Bay Sunday evening. Let’s just hope this doesn’t become the story.

No one wants that.