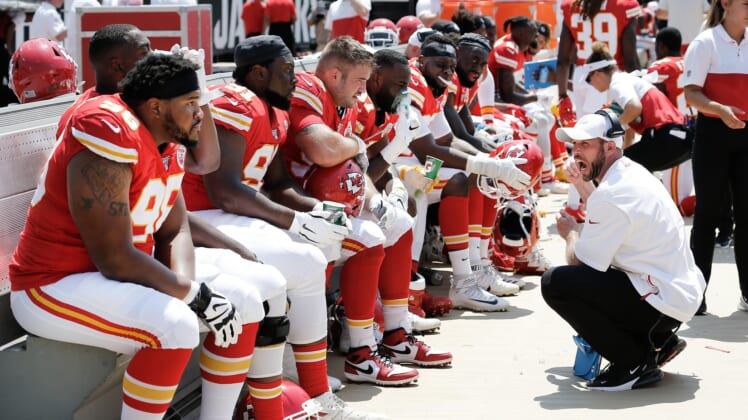 Reports surfaced on Friday that on late Thursday evening, Britt Reid was involved in a three-car accident that resulted in a five-year-old sustaining life-threatening injuries. Reid was suspected of driving impaired.

ESPN’s Dianna Russini provided a follow-up report on Saturday regarding Britt Reid’s situation, stating that he won’t travel with the Chiefs to Tampa Bay for Super Bowl LV as he remains in the hospital, but his father Andy Reid will travel and coach in the game:

Kansas City otherwise should have a full coaching staff and complement of players for Super Bowl LV after all players cleared COVID-19 protocols and testing late this week.

Britt Reid involved in car wreck, may have been impaired

According to a report by Andrew Lynch of Fox4 Kansas City, police officers who responded to the scene of the crash near Arrowhead Stadium carried out field sobriety tests for Britt Reid, and concluded he was showing four indicators of impairment.

The report also states that Reid, 35, had bloodshot eyes, and smelled of alcohol.

More details from the police report, per ESPN.com’s Adam Teicher, stated that a car was out of gas on an on-ramp to Interstate 435, and that they called family for assistance. That led to both cars being parked on the ramp, and Reid then allegedly crashed into them.

Another four-year-old child involved in the crash was taken to a local hospital and treated for injuries, although those weren’t critical.

ESPN’s Adam Schefter shared a statement from the Chiefs after news of the accident involving Reid broke:

Reid joined his father’s staff in Kansas City before the 2013 season, working initially as a defensive quality control coach. He’s since moved his way up the coaching ranks, working as assistant and then lead defensive line coach in subseuqnet years before taking over as linebackers coach in 2019.

The Chiefs are looking to win back-to-back championships on Super Bowl Sunday, but may have to do so without the younger Reid on the sidelines in Tampa Bay.