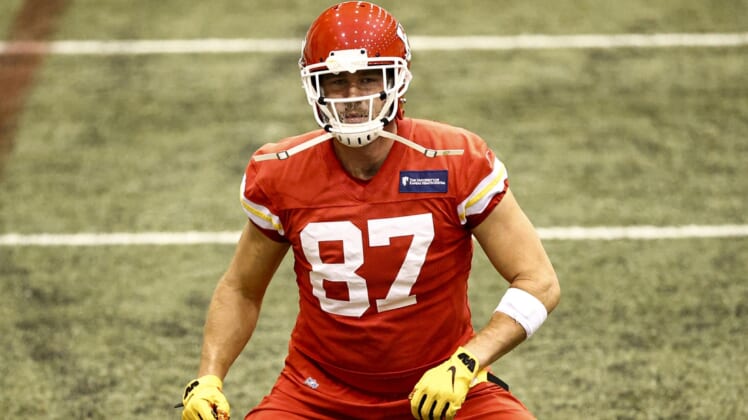 A brisk cold, with Friday morning temperatures in the low 30s, didn’t stop the Chiefs’ enthusiasm during an outdoor practice.

A Ric Flair-like “Woo!” and thunderous applause from players following virtually every play on either side of the football filled the air.

The effort had Kansas City head coach Andy Reid coming away pleased with the Chiefs’ performance in the final stages of preparations before they square off against the Tampa Bay Buccaneers in Super Bowl LV on Sunday in Tampa.

“Listen, it’s a shorter practice today, so they’re fired up to get through it and get going,” Reid said.

Reid, however, doesn’t appear concerned over Watkins’ availability against the Buccaneers after seeing the veteran wide receiver return to a full practice Friday after limited sessions the previous two days.

“He did good,” Reid said. “I’m encouraged to have him on Sunday. I think he’ll be there.”

Backup running back Darwin Thompson missed Friday’s practice because of an illness, Reid said. The Chiefs did not assign a game designation on Thompson on the injury report, indicating the second-year running back will be available for action barring a setback. Backup center Daniel Kilgore remains away from the training facility while he continues to go through safety protocols after landing on the Reserve/COVID-19 list earlier in the week.

In the meantime, the Chiefs are scheduled for a Saturday morning walk-through practice before boarding an afternoon flight for Tampa.

With less than 48 hours to go before Super Sunday and almost two weeks since the last time the Chiefs played in the AFC Championship Game, Friday’s practice provided a sign of the excitement level knowing what comes next.

“It’s been two weeks,” Reid said. “I think both sides want to play each other and get it on.”

(The Super Bowl pool report was produced by Herbie Teope of the NFLPA and distributed to accredited media.)