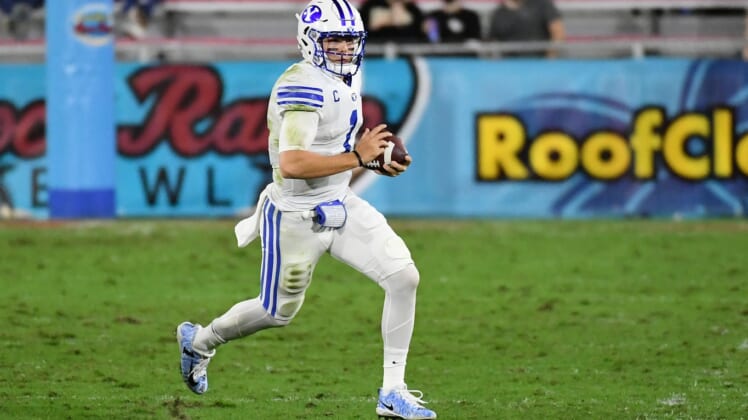 There’s been a ton of New York Jets rumors linking the team to a potential blockbuster trade here soon. First off, New York is said to be one of the teams disgruntled Houston Texans quarterback Deshaun Watson would potentially be interested in. Secondly, former top-five pick Sam Darnold appears to be on the trade block.

As you likely already know, there’s also a pretty big backdrop to all of this. These Jets boast the No. 2 overall pick in the 2021 NFL Draft.

They will either trade out of the top spot with a quarterback-needy team or select a franchise signal caller with that pick and trade Darnold. We now have some more information on this. It’s rather interesting stuff.

“They’re going to comb through all the draft picks,” ESPN’s Jeremy Fowler reported on Sunday (h/t Bleacher Report). “I know the BYU player is someone the Jets are intrigued by. They like his game. They believe he can really spin it.”

Wilson has stood out over Ohio State quarterback Justin Fields during the pre-draft process. In fact, there’s some who actually prefer him over consensus top pick Trevor Lawrence. Alas, that’s a story for another time.

The 6-foot-3 Wilson is coming off a tremendous season with BYU that saw him complete north of 73% of his passes with 43 total touchdowns and just three interceptions. Comparisons have been drawn to the likes of Patrick Mahomes and Kyler Murray. That can’t be taken lightly.

New York Jets rumors: Where we stand on a Sam Darnold trade

The other backdrop here is Darnold’s status in New York after just three seasons. New Jets head coach Robert Saleh and general manager Joe Douglas are evaluating the quarterback position in the lead up to the 2021 NFL Draft.

Said evaluation will take them through the end of March, potentially complicating a Darnold trade in the process. In short, other quarterback-needy teams might have already solved that part of the NFL offseason equation before the Jets fully evaluate quarterback prospects.

Darnold, 23, is drawing interest from multiple teams despite a less-than-stellar three-year run in Jersey. That span has seen him throw just 45 touchdowns against 39 interceptions while boasting a 13-25 record in 38 career starts.

The market rate for Darnold on the NFL trade block is said to be a Day 2 pick and another mid-round selection. If the Jets do indeed hone in on Zach Wilson, Darnold will be moved. When that happens is anyone’s best guess.