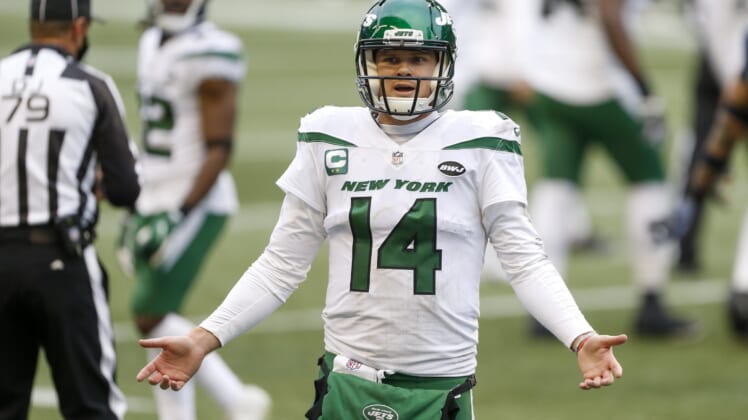 The New York Jets face a pivotal decision at quarterback this offseason. Either they stick with Sam Darnold, allowing the former No. 3 overall pick to learn a new system, or they trade their starting quarterback and find his replacement in the 2021 NFL Draft.

When New York first hired Robert Saleh as head coach, early reports indicated they were high on Darnold. But the franchise wouldn’t commit to its top quarterback, leading to many teams inquiring about his availability. Now, holding the No. 2 overall pick in the upcoming NFL Draft, the Jets are deciding whether they want to bet their future on Darnold or an intriguing talent like Justin Fields or Zach Wilson.

Here’s the latest on the future for New York Jets quarterback Sam Darnold.

Since word broke that Darnold might be available this spring, more teams have called the Jets inquiring about a trade. Despite some awful play over the past three seasons, general managers see an opportunity to buy low on a talent who many were very high on entering the 2018 NFL Draft.

New York is aware of the circumstances surrounding Darnold. He doesn’t turn 24 until June and his development in the NFL was hindered by Adam Gase and one of the worst supporting casts in the NFL. He could still be a franchise quarterback and the Jets are doing their due diligence before making a final decision.

According to Sports Illustrated’s Albert Breer, it will likely be a little while before there is a resolution. The Jets are open to the idea of trading Darnold, but not until they finish evaluating the top quarterback prospects in the 2021 NFL Draft.

Zach Wilson has elevated himself after a breakout season at BYU. Scheduled to have his Pro Day on March 26, New York has time to evaluate his film before attending his workout. If they like what they see in person, providing general manager Joe Douglas with the confidence that Wilson is superior to Darnold, it could accelerate trade talks.

Ohio State star Justin Fields and North Dakota State quarterback Trey Lance are also candidates to be the No. 2 overall pick. While Fields’ draft stock is sliding, his physical talent arguably makes him the second-best player in this draft class. Lance has more questions, making the jump from the FCS to the NFL, but he was phenomenal in 2019.

Of course, Deshaun Watson is also a factor in this evaluation. The Houston Texans aren’t even listening to trade offers, despite their star demanding to be moved. A resolution isn’t close and it could stretch beyond training camp, but Watson would be a monumental addition for the Jets. Keeping Darnold past the NFL Draft would give New York another trade chip to offer the Texans.

For now, Darnold will remain with the Jets. If he remains with the organization, there is an opportunity for him to turn things around. A 59.8% completion rate and a 45-39 TD-INT ratio in three seasons are alarming, but offensive coordinator Mike LaFleur is bringing a quarterback-friendly scheme to New York. If the Jets are aggressive in free agency, they could create a supporting cast that will help Darnold or another quarterback thrive under center in 2021.