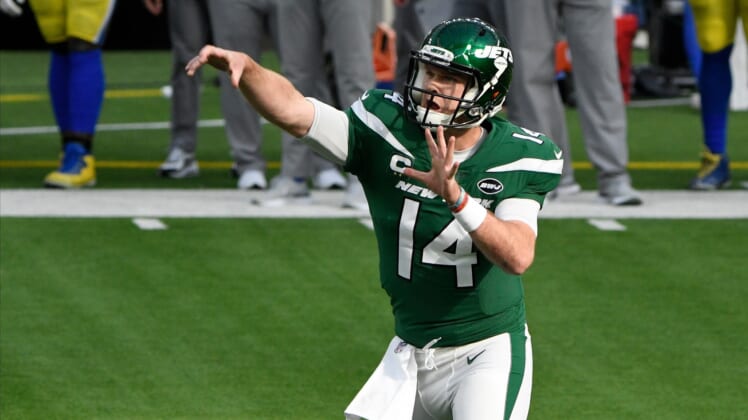 It’s looking more and more like a Sam Darnold trade will be the next domino to fall following the blockbuster Matthew Stafford and Carson Wentz deals.

Various reports indicated recently that the New York Jets are asking for a second-round pick and a mid-round selection for the struggling former No. 3 pick. As we saw with the Wentz trade, things can become very fluid.

Remember, Philadelphia expected to get a lot more than a third-round pick in 2021 and a conditional 2022 second-round selection. Set to count a mere $9.79 million against the cap in 2021, the 23-year-old Darnold would cost his new team less than $5 million. That’s a major selling point given the NFL salary cap situation.

The decision to re-sign Taylor Heinicke really doesn’t change a whole lot for the Washington Football Team. He’s set to count just $2 million against the cap and can be an effective backup. Meanwhile, there’s no telling whether Alex Smith will be back in D.C. He wants to play in 2021 after making a miraculous return from a devastating injury.

What does this all mean? Washington can save $13.6 million against the cap by releasing Smith. The team currently has $30.77 million in cap room. By pulling off a Sam Darnold trade and releasing Smith, Washington would have roughly $40 million to spend in order to upgrade a roster that’s coming off an NFC East title. In turn, the team could have Heinicke and Darnold compete for the starting job. The 51st pick and a fifth-round selection could get this done.

The Bears are in somewhat of a panic mode right now. We already know that general manager Ryan Pace and head coach Matt Nagy on the hot seat. With that comes a ton of pressure to upgrade from impending free agent Mitchell Trubisky under center. That’s magnified after Chicago missed out on Matthew Stafford and Carson Wentz.

Would Darnold represent a dramatic upgrade from Trubisky? I am not too sure. However, Nagy can take a chance that the still-young 23-year-old quarterback uses a change of scenery to take off. It’s a risk. It could cost Nagy and Pace their jobs. But there’s really no other realistic alternatives short of Chicago pulling off a blockbuster Deshaun Watson trade.

Recent reports suggest that 49ers head coach Kyle Shanahan loved himself some Sam Darnold heading into the 2018 NFL Draft. That love apparently exists today despite three less-than-stellar seasons from the USC product in New Jersey. As with the Bears and Trubisky, the primary question here is whether San Francisco believes Darnold is an upgrade over Jimmy Garoppolo. That seems unlikely.

This scenario would include San Francisco bringing Darnold in to compete with Garoppolo during training camp. His cost of under $5 million makes this realistic given the 49ers’ cap situation. And while acquiring the quarterback without picking up his 2022 contract option is a risk, it’s more realistic than San Francisco giving up the farm for Deshaun Watson. The team can offer up the two third-round picks it acquired when these very same Jets hired then-defensive coordinator Robert Saleh to be their head coach.

This would be similar to the 49ers with Garoppolo. By now, it’s known that the Broncos are in on Watson. They are looking for a clear upgrade over young quarterback Drew Lock after just two seasons. Remember, Lock tied Carson Wentz for the league lead interceptions with 15 a season ago. He also has no built-in relationship with new Broncos general manager George Paton.

A move of this ilk would be for Denver to bring Darnold in to compete with Lock for the starting job. As with the 49ers, it would also be done without Denver picking up the fifth-year option on the quarterback’s rookie contract. If Darnold wins the job and plays well, the Broncos would then be in position to re-sign him in free agency. The 40th pick in April’s draft could get this done.

Panthers owner David Tepper is seemingly hellbent on acquiring Deshaun Watson. With that said, a Sam Darnold trade could make some sense for this squad. Teddy Bridgewater is coming off a ho-hum for season with Carolina and is not happy about the team chasing after both Watson and Matthew Stafford. It remains to be seen whether he will be back with the Panthers, regardless of whether they are able to add Watson.

Darnold would be a cheaper alternative. He boasts more upside than Bridgewater. Meanwhile, the Panthers could use the No. 8 overall pick on another position outside of quarterback. They would then bring in another veteran to compete with Darnold while somehow finding a way to move on from Bridgewater. The 39th pick in the 2021 NFL Draft could get this done.