George Paton was introduced on Wednesday as the Denver Broncos' new general manager, as John Elway officially took a step back amid the team's rebuild. 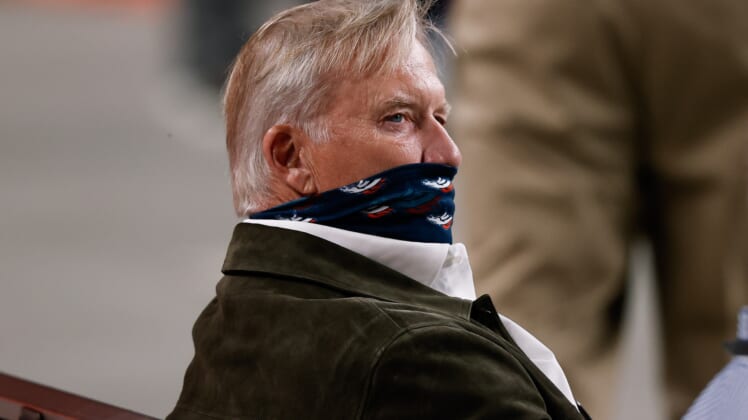 The Denver Broncos have a new general manager, as legendary franchise quarterback John Elway announced George Paton as his front-office successor on Wednesday.

Although Elway still holds the title of president of football operations, he’ll be taking a backseat to personnel decisions in favor of the longtime Minnesota Vikings executive.

In a news release through the Broncos’ official website, Elway described why Paton was the right man for the gig:

“Early in this process, it became clear why George has been such a coveted GM candidate for so many years. He is a proven evaluator who knows every detail of leading football operations. With his experience in all aspects of the job—the college and pro sides, salary cap, trades, working with the head coach and bringing the staff together—George is more than ready to succeed in this role. George has waited and worked for the right opportunity, which shows that he is smart and serious about winning.”

ESPN’s Adam Schefter reported that Paton signed a six-year contract, meaning he’ll have plenty of runway to build Denver’s roster the way he sees fit. However, Paton suggested the Broncos already have several promising pieces in place, as several incumbent players are bound to make his job easier.

“This organization has great resources, tremendous people, a talented young core of players and an outstanding coaching staff. In many ways, I feel like this team is a sleeping giant. For me, it is the right place and the right time for this opportunity,” Paton said.

Paton served as assistant to Vikings GM Rick Spielman and has been buzzed about as a candidate before landing in the Mile High City after 14 years in Minnesota. It seemed only a matter of time before Paton got his shot, and he has a decent situation to work with in his new post with the Broncos.

With about $19 million in salary cap space, there’s some room for Denver to at least build out its roster depth, but there are some big decisions to make on key veteran, most notably, former Super Bowl MVP pass-rusher Von Miller.

Releasing the eight-time Pro Bowler would almost double the Broncos’ cap space by saving them $18 million. With Bradley Chubb already in place as a strong player off the edge, it may be time for Miller to spread his wings and land with a more realistic 2021 championship contender. Other defenders like Kareem Jackson and Jurrell Casey are due to be eight-figure cap hits, too, but could restructure their deals, while star free safety Justin Simmons is hitting free agency.

Denver coach Vic Fangio is widely respected as a defensive tactician, though, so whomever Paton supplies him with, should be able to fit the system and execute under Fangio’s tutelage. The bigger question mark is on offense.

Adapting to a new system under offensive coordinator Pat Shurmur, there were some serious growing pains for second-year quarterback Drew Lock, who threw 16 touchdowns and 15 interceptions in 13 games. However, under the circumstances and given the ceiling Lock has shown to date in the pros, it’d be a tough call for the Broncos to give up on him.

In addition to Lock, Denver’s offense has a ton of young building blocks in rising sophomore receivers Jerry Jeudy and KJ Hamler, not to mention 2019 first-round pick Noah Fant, who’s a matchup nightmare at tight end when he’s on the field.

Paton will have the ninth overall pick in the 2021 NFL Draft. What he does with that asset will be telling in his vision for how the team will be built. Moving off Lock, or trading up for another QB, would be a bold move and a watershed moment to begin his tenure. On the other hand, perhaps Paton will land another blue-chip prospect, give Lock a proper support system, and see how the young gunslinger does in Year 3.